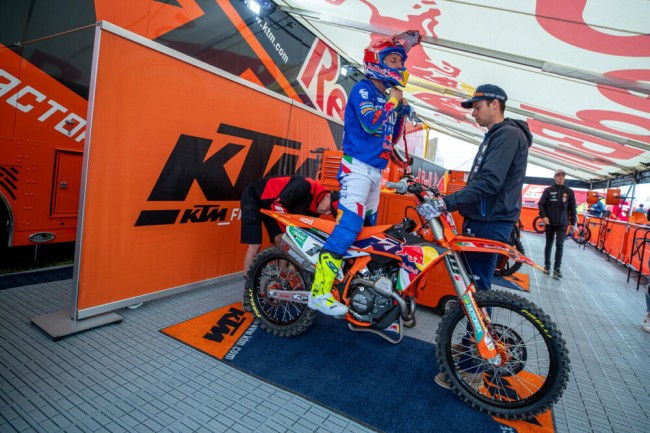 RedBud offered goodbyes and good lucks. Those racing the MXoN and (possibly even motocross) for the last time in the USA were Tony Cairoli, Jeremy Van Horebeek, Tommy Searle and Dean Wilson (giving the Team GBR roster a tinge of nostalgia and dedication) and maybe Tanel Leok: a man who knows no limits when it comes to representing his county and now with almost two decades of Team Estonia service.

Cairoli, wearing the #1 on his Red Bull KTM for what was the best visual send-off, a year after MXoN success on home soil bookended a distinguished full-time career, turned 37 on the eve of RedBud and still had the chops to mix in the top ten with a 7 -9, and missed decent starts to do better.

The Sicilian hasn’t raced since his AMA Pro National appearances back in May and his place on Team Italy was as much about being a talisman, leader and mentor as it was for results. Debutant Andrea Adamo (18) and Mattia Guadagnini (20) were at the opposite ends of the scale in every respect, although Guadagnini summed up his entire 2022 season in one afternoon by holeshotting and riding to 3rd in Moto 2 but then overshooting and crashing on the first corner in Moto 3. Adamo was 15 -15 for 7th in MX2.

“We didn’t really have the race pace and didn’t get into the mix,” said Cairoli of his own competitiveness. “Also, in these kinds of conditions it is tricky to start and go full gas with all the guys, there were so many ruts. We had a really strong team, even if we did not have so much experience with the other two riders and they made mistakes. Mattia had one moto very good and some crashes in the other but it’s only his second Nations and Andrea had his first and he could have ridden better I think, based on what he has shown in the GPs but, of course, the pressure counts for a lot of things at these kinds of races. He still brought home a good result actually and the teams that made the podium are really strong. We are fourth ahead of many other good Nations.”

“I enjoyed myself because I didn’t take any risks and rode 70% of my possibilities,” Cairoli added. “I didn’t want to crash and I didn’t want to risk that much: I have ended my career without any injuries and I was getting emotional when I crossed the finish line in that last moto.”

Cairoli won’t be applying the tear-offs for a while but also he won’t be going anywhere soon. Expect an update on his plans via KTM in the coming weeks.