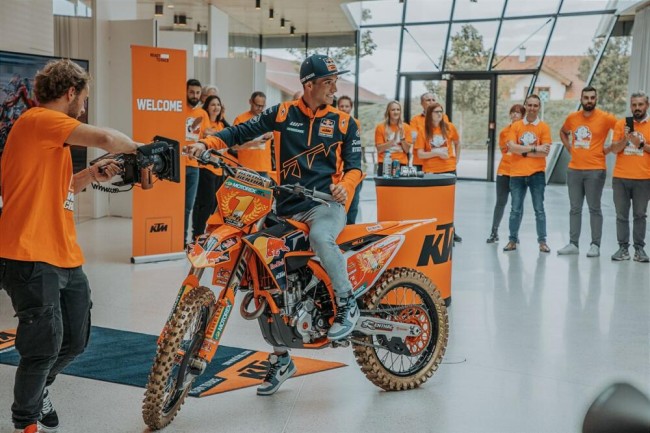 Red Bull KTM Factory Racing opened their workshop doors for 2022 MX2 World Champion Tom Vialle to blast his KTM 250 SX-F around the KTM facility in a special event designed to honor the 21-year-old double #1 this week.

Vialle joined Red Bull KTM from the European Championship ranks in 2019 and went on to claim two MX2 titles in four years and amass 24 career Grand Prix victories. In the wake of his most recent success he was invited to the factory in Mattighofen and Munderfing to be welcomed by appreciative KTM staff.

The Frenchman was firstly given a tour of the KTM Motohall where his motorcycle and gear will enter the ‘Heroes’ gallery before then throwing a leg over his 2023 KTM 250 SX-F when he rode into a full reception to acknowledge his exceptional achievements at the highest level of racing.

Vialle secured his second world crown with a tense and gripping last-moto, last-round performance to win the 2022 Grand Prix of Turkey and demonstrate the potency of the fresh 2023 concept for KTM SX-F engineering. He owned 10 Grands Prix and gathered 15 podiums from 18 rounds this year; his most prolific season of four in the MX2 division. #28 is KTM’s fourth double MX2 world champion, joining names such as Marvin Musquin, Jeffrey Herlings and Jorge Prado.

Vialle had formed a key bond with team members such as Dirk Gruebel, Harry Norton, Joel Smets and Valentina Ragni among others in his rapid-fire rise to the top and his perfect synergy with Red Bull KTM operation.

Tom Vialle: “It was really nice to go for the factory for an event like this and it was a big surprise to see how many people were there for it. I had four fantastic seasons and two titles with this amazing team and to have this ‘thank you’ felt very special. We saw the Motohall and then other parts of the factory and everyone connected with the MXGP team and project. I am very thankful.”

Pit Beirer, KTM Motorsports Director: “A special day for a special racer and for what was a special achievement this year. Tom kept us all on the edge of our seats as he fought hard for the MX2 championship. He showed real composure in a very pressurized situation to bring another title to Red Bull KTM so this welcome and celebration of what he did feels like the least we can do. Tom’s mentality and ability means that he will be able to take on the tough new adventure he faces in the USA and all the people that were here today, as well as his many fans, will be watching as he goes on to create more amazing stories. Best of luck Tom and thanks for everything so far.”

Tom’s time in Austria was also fitting considering the next challenge of his career: he will leave Europe to relocate to the North American wing of Red Bull KTM Factory Racing to attempt 250SX and 250MX AMA Supercross and Motocross in 2023.