Interview: Gianmarco Cenerelli on his impressive start to the season 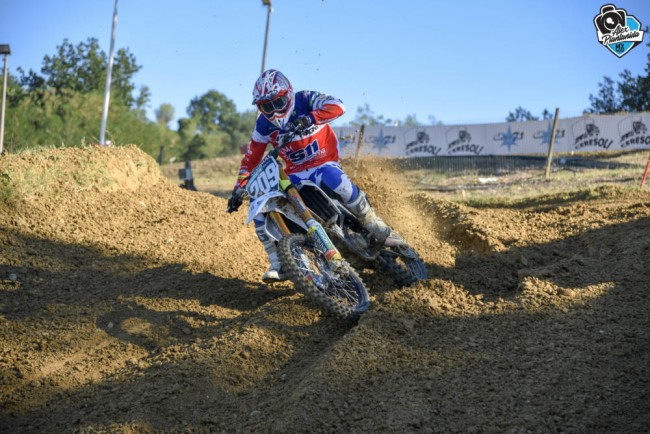 One rider that really impressed at the opening round of the Italian Championship at Faenza was Gianmarco Cenerelli as he actually won the first MX2 race of the season in the Italian series. On the day, Cenerelli ended up second overall behind the impressive GP rider of Maxime Renaux so he certainly had a great first round and will look to progress as the season moves forward.

Unfortunately an injury ruled Cenerelli out of the opening round of the EMX250 series but he’ll race the rest of the series and if he can bring the speed he had at Faenza he could be at the sharp end of the field – it’s also worth pointing out this is only his second season racing the European Championship so racing at this level is still fairly new for him.

We caught up with Cenerelli to discuss his impressive start to the season and more.

Gatedrop: Gianmarco, the opening round of the Italian Championship went brilliant for you. Can you talk me through your races?

Cenerelli: Yes, straight from the Saturday qualifying I have a good speed, we know I can stay with the fast group. In the first moto I started about 20th position (this year the MX2 elite race with MX1 elite) so I was 5th in the MX2 class.  In the third lap I got into second position in MX2 and after Maxime Renaux’s mistake I took the lead and won the first race. In moto 2 my start wasn’t as good, after a few laps I made my way into third position. I had good speed and tried to pass Guadagnini but I couldn’t get it done and i finished third in MX2 and second overall.

Gatedrop: You won the first MX2 moto – just how did that feel? You beat some very fast riders.

Cenerelli: I’m so happy. We worked very hard this winter with my team S11Motorsport of Carbonari Matteo and Moroni and with my personal trainer Damiano Pellegrini DP Trainer, we have a good feeling with the bike already from the Internazionali d’Italia but an injury stopped me for twenty day’s and I wasn’t ready to race in Valkenswaard.  I couldn’t ride during the Covid-19 pandemic but I didn’t stop with the physical training.

Gatedrop: Some riders said the track was quite dangerous, what were your thoughts on the track?

Cenerelli: The track was a bit dangerous but it was the same for all the riders/

Gatedrop: Coming into this season what were your goals for the Italian Championship?

Cenerelli: My goal is to be top three in the MX2 Italian Championship.

Gatedrop: The format has changed for the Italian Championship with the “elite” class which means you race with the MX1 riders. What’s your thoughts on that?

Cenerelli: The format of the race this year hurts the MX2 riders, it’s to much harder to start and overtake the 450. Also, I won the first moto of my class but for all the viewers the winner was Paulin!

Gatedrop: You didn’t race the opening round of the EMX250 series – are you planning to race the rest of the series and if so what’s your expectations?

Cenerelli: For my future, I want to ride in the World Championship.

Thanks to Gatedrop for this interview!