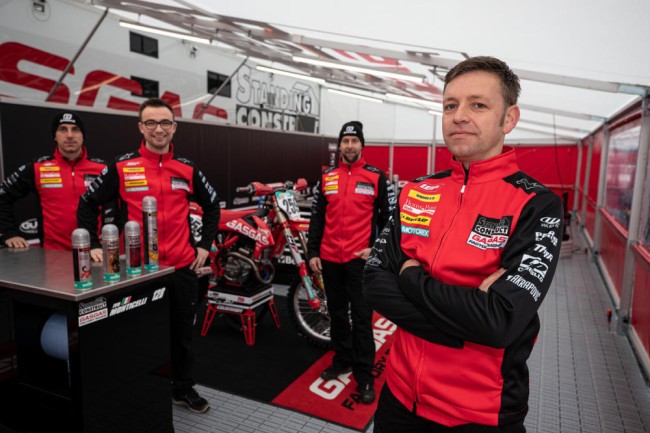 GasGas Standing Construct Factory Racing’s lead technician, Wim Van Hoof, explains how the team have worked in MXGP with Glenn Coldenhoff and Ivo Monticelli and moved in their own direction with a new brand, but a familiar motorcycle base. “For sure, in the beginning it started from the base of the KTM, much like the Husqvarna did, but then turned into a new platform,” he says. “The frame is the same but then everything around it is different.”

Could you describe a couple of the ways in which the MC 450F varies?

For the moment the design of the plastics and a new fuel tank means the bike is slimmer and smaller than a Husqvarna, which the riders really like and that was the first feedback from the initial tests we made pre-Covid 19. During the break in racing we had a lot of time. We are a factory team but we still build our own engines. We built three and then the first test we made with Glenn, he tried the first one and felt we’d made a big step again. We had more feedback from our test rider who said it felt like a completely different bike: that was positive for the feeling of the chassis and for the suspension, and this was also Glenn’s feeling. We kept the GP bike from the first two rounds and then this new one and each time Glenn took out the second bike we noticed a difference in lap-times from 1.5 to 2 seconds quicker on each track. The engine was better but reflected the ability of the chassis better. The bike was easier to ride fast and didn’t move so much. It helped him to that GP win in Latvia. For the starts, he was initially struggling with the new set-up because the bike pulled so much harder and was lifting. But Glenn worked a lot on his technique and this is one of the great professional things about him.

Any hint as to what you found with the engine?

Normally I don’t have much time to put all my ideas into the engine but the Covid break gave us that chance. We are quite a small team and a small group but we have quite a lot of trust in each other. I was able to test a couple of these ideas in the engine last year and they did not work out. Now I had the time to realise why they didn’t work and what I had to change. It’s a massive internal change and it’s working.

You cannot be wanting more power with the GasGas engine?

The KTM stock bike has more than enough power for amateurs but for MXGP we need more power than production and the important thing is to ‘stretch out’ that power. Glenn is always using 2nd and 3rd gear. That’s one thing he told us when he came to the team “sorry guys, you can make what you want but I am always a 2nd and 3rd gear rider”. Max Anstie the previous season was always in 3rd and 4th and Ivo is always in 3rd and sometimes 4th. It’s a plus-point for us that we can do what we want with the engines and customise them fully. In many teams they are given the engines and they have to do what they can with those engines; if the rider is unhappy then he just has to adapt to the bike. We can make it personal.

Being a factory team for a new brand must mean a close connection for technical development?

I’m always filling in race reports! They know a lot about our engines, so things like the camshafts and compression ratios. They are always moments when you make a gain and you want to keep it for yourself! There is one factory in Austria but with three brands! We know if any rider from those brands are winning then it is good for Austria but we, as teams, want to keep something so we are the ones winning and making ground.

Will a GasGas engine come from the combination of all that feedback between riders then? Or are you more direct with the factory?

READ  Nathan Watson to race the MXGP of Lommel

We’ll see, because I also don’t know how good the other engines are. As a team you never know if you have the best engine compared to the others. It’s about making the complete pack: the chassis, suspension, engine and mapping has to fit to the rider. When he’s happy then the results come. One rider might have a less powerful engine but makes better results because of the fit. The rider himself needs to blend with the bike and to be happy with things like starts. On the chassis side we are using a completely stock swing arm and link system and the riders are happy with this material. We tested other components – different links – but we always come back to stock. So, it’s at a good level. With factory bikes there are always some progressions because of the feedback. We are happy with the frame we have now but there is a possibility that others are coming in the near future.