Barr on his MX Nationals win: It makes it all worthwhile! 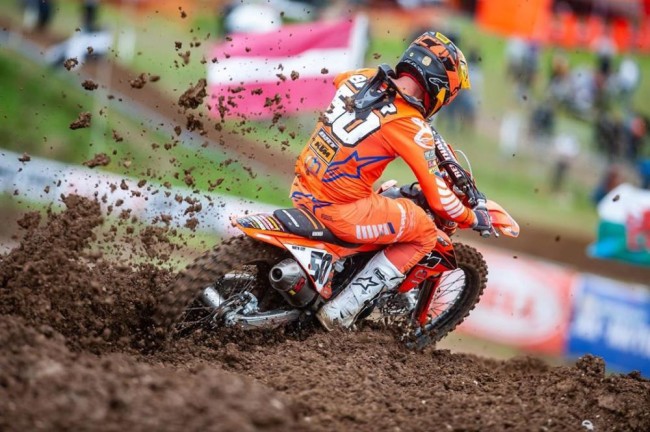 Running your own team during 2020 with Covid hasn’t been the easiest of things to do for Martin Barr, but the man from Northern Ireland ended his season on a high with a brilliant overall win at the final round of the MX Nationals in tough sandy conditions in FatCat.

Barr’s win on his BRT KTM team amidst the difficulties of the season verify his ability on the bike and also his professionalism off it to organise the logistics and running of the team as well as continue his physical preparations to ensure he comes to the races at 100% despite the unsure nature of the 2020 season.

“The final round of the MX nationals at FatCat was absolutely fantastic,” a very happy Barr told us. “The day started decent with sixth in qualifying although I didn’t get a completely clean lap in I wasn’t away and it set me up nicely for the day. I felt really good on the bike.

“In race one I made a really good start and took the holeshot but I dropped to third on the first lap, Bobryshev and Van Doninck passed me but I didn’t get in a fluster, I knew it was going to be a long race with the track being so gnarly. I settled into a rhythm and a couple of laps later Van Doninck slowed off so I passed him and eventually he dropped out. But while I was doing that I could see I was closing in on Bobryshev, so I just carried on pushing on and kept that flow and with three laps to go made the pass.

“I just tried to keep going and break away because I knew if he saw an opportunity he would try and pas me. But I kept a steady head and pulled away and felt really comfortable to win by 8 seconds at the flag. That was my first win this year at the MX Nationals and it felt fantastic.

“Race two I was really looking forward to it, didn’t make such a good start, still top 5/6. But the first lap I came together with somebody and lost a few positions and it took me a lap or two to get into a rhythm but once I started doing that I just used my head and started picking the riders off. Once I seen Bobryshev at the side of the track with a DNF, I knew if I got by Milward for third position it would give me the overall. once I done that I just used my head and kept that rhythm going. I did close in on Tommy at one stage but made a little mistake and stalled in one of the corners and once I did that, I just used my head to bring it home to get first overall this year, the first for BRT KTM.

On his achievement to win while running his own team, Barr said: “With running my own team it felt absolutely fantastic. Being the rider, the team manager and having that extra stress and pressure on me to make sure everything is right. On days like that when you go out and get a race win and overall for the team, it makes it all worthwhile. It was good to show everybody I have still got it, I have always known I have the speed to win but it was just piecing everything together, it was nice to go out and do that and make it happen.

On 2021 Barr says things are looking promising: “Hopefully it (the win) will stand by me. For 2021 I am in discussions at the minute, but nothing is concrete, so hopefully in the next few weeks we will have everything in place to knuckle down and start getting bits and pieces sorted and have a really good winter’s grind and come out swinging again in 2021.”