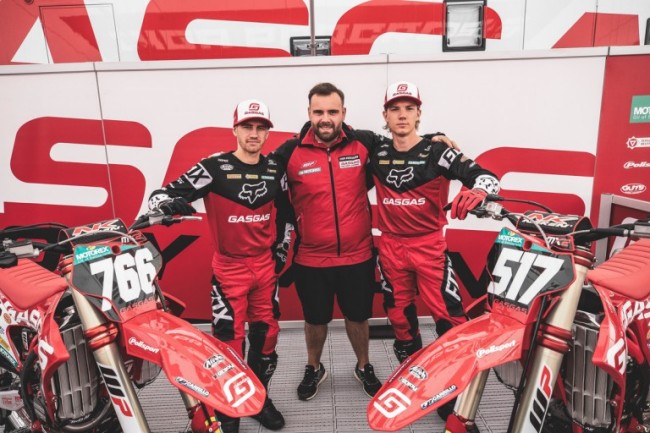 The first two events in Mantova are over, give us an insight how it went for DIGA-Procross GASGAS Factory Juniors?

Justin Amian: We are very happy that we could gain two replacement riders for our team, who represent the brand and the team very well. The cooperation is very professional and we are happy to give Isak Gifting and Michael Sandner a chance to show themselves at the highest level.

Three weeks ago DIGA-Procross and GASGAS suddenly found themselves without a rider before the third event of the Triple Header in Faenza, as both athletes (Jeremy Sydow and Simon Längenfelder) were injured. Give us an insight into your thoughts from 3 weeks ago.

Justin Amian: Unfortunately, in motocross, events and injuries happen that are not nice and nobody expects them to happen. Dealing with these situations is the task of me as manager, the team including mechanics, trainers and riders. Unfortunately, sport is merciless and I hope that the two boys will recover quickly and have not suffered any permanent damage. We are making the best out of the situation and continue to give everything to get to the top with our athletes.

Can you tell us something about the state of health of Simon and Jeremy?

Justin Amian: Both boys are doing well, according to the circumstances, and are on the road to recovery. Rehab has already started for both of them and we hope that both of them will be back as soon as possible.

Now you have brought two other young athletes to the start in cooperation with GASGAS. How did it all go?

Justin Amian: The time to get everything up and running was very tight. In the days after Faenza I made countless phone calls and conversations. When it was clear that Isak and Michael would be competing for us, the first thing we had to do was sort out all the formalities and get the equipment. A GIANT thanks to our partners who acted immediately and supported us with enough material for the two athletes. Then we arranged the next steps and tests.

How much time did you have before Mantova for testing and arranging everything?

Justin Amian: We had exactly 7 days to prepare and coordinate everything. Because we work very closely with the factory, we were able to quickly organize suspension tests with WP Suspension and also test some other parts. Normally such a procedure takes several weeks, and we are very happy that we were able to do all this in such a short time.

What were your expectations when you came to Mantova?

Justin Amian: There was no real expectation for Mantova due to the short time of preparation. Our goal was to develop and improve from race day to race day and to score as many points as possible for GASGAS.

This expectation was clearly exceeded by Isak Gifting’s two top 10 rankings. Did you secretly expect this?

Justin Amian: After the first tests I had a hunch about the direction it could go. BUT you never know how things are going to go on a race weekend, especially when a rider gets out of the EMX250 and starts in the MX2 World Championship for the first time. Overall I am very satisfied with Isak Gifting’s performance.

Michael Sandner said after the last race that he was struggling a bit. What does he mean more precisely?

Justin Amian: Michael Sandner has been training exclusively on hard ground in the last weeks/months and therefore had to get used not only to the new bike but also to the sandy ground again. In addition, Michael has caught a slight effect, which fortunately has subsided again. All in all, we are still satisfied with his performance and we know that he will attack fully again this weekend.

What are your expectations for the last event in Mantova next Sunday?

Justin Amian: For the last race in Mantova I hope that both boys will have solid starts, score points in both races and just give their best. In addition to the points mentioned above, it is very important to me that both athletes develop personally and show even more routine in their daily MX2 GP routine.