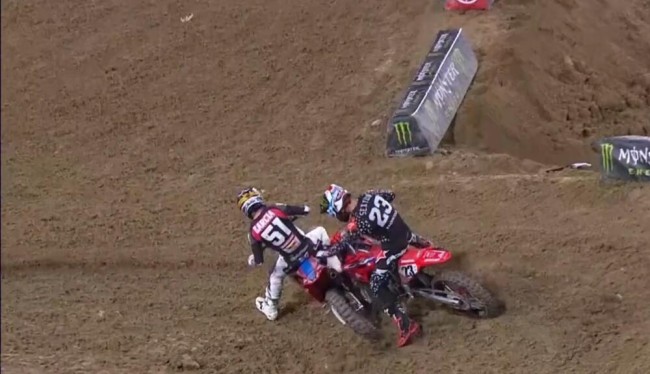 After being taken out by Jason Anderson in the heat and not being happy about it (with Anderson laughing at the irony saying Barcia can give it but can’t take it), Justin Barcia put Chase Sexton down in the main event in the exact same spot, then said he didn’t want Sexton to hit the deck!

Things are getting interesting in San Diego 🍿#SupercrossLIVE #SuperMotocross pic.twitter.com/vF9aQ8CzDv

Barcia: “Track was tough, had a pass on Chase and I was so bummed he went down, we came together so hard after the triple. That’s where Jason got me too, and it’s juut one of those corners when it’s left open and we come together so hard, that was lame. I hate it, I threw my hand up because we are buddies, I hate that, don’t want to have that happen – no fun.”

Malcom and Sexton down early 😱

Meanwhile, Sexton told Jason Weigandt in the Weege show, “There’s not much you can do with that, because you are going to get the same thing every time. I actually talked to him before the main event, he took me clean off my bike. I don’t know, you kind of expect that from him. I didn’t know he was behind me.” Full chat below: