Barcia battles to first AMA Supercross podium of the season 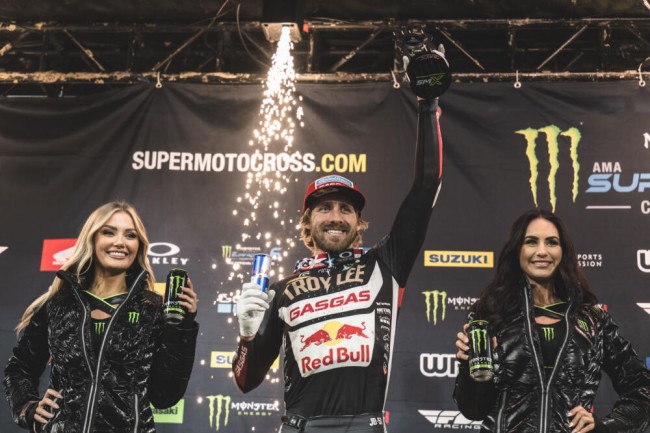 After an unexpected weekend off for the Troy Lee Designs/Red Bull/GASGAS Factory Racing Team due to flooding in the NorCal region, Justin Barcia and Pierce Brown returned to action at an all-new venue for San Diego, Snapdragon Stadium. Barcia showcased some serious speed to earn third on the night in the 450 class, while Brown tallied a strong fifth in the 250 West main event.

450SX
A third-place finish in his heat race showed that Justin Barcia was ready to battle for a podium spot by the end of the night. When the gate dropped in the main event, Barcia was in sixth place early on aboard his MC 450F Factory Edition before working his way into the top three at the three-quarter mark.
Justin Barcia: “In the heat race I was hitting the whoops really well, and staying with Eli, which was sick. Towards the end I had a few mistakes and Anderson got around me good, which was a bummer. But I ended up third and got a solid gate pick. In the main event, I got off to a good start. There was a lot of pressure, and some awesome battles. It was super-gnarly and the track broke down a lot, but I ended up third. I had a lot of fun, and I’m stoked to regroup before heading into Anaheim 2.”
250SX West
Coming off a tough start to the season at A1, the unexpected weekend off was well-timed for Pierce Brown as he scored some extra time to rebound. As usual, he showed serious speed after qualifying in third spot, while also finishing second in his heat race aboard his MC 250F Factory Edition. In the main event, he came home with a solid night, finishing in fifth.`
Pierce Brown: “We have a lot to build from. I got third in qualifying, second in the heat, and then fifth in the main. I need to clean a bunch of stuff up to get closer to that front group and fight for some wins. But we made it out alive, so we’re going to get back to work this week and hopefully bounce back and build off of it next weekend.”
Next Event (Round 4): January 28, 2023 – Angel Stadium of Anaheim in Anaheim, California
Results – 2023 AMA Supercross Championship, Round 3