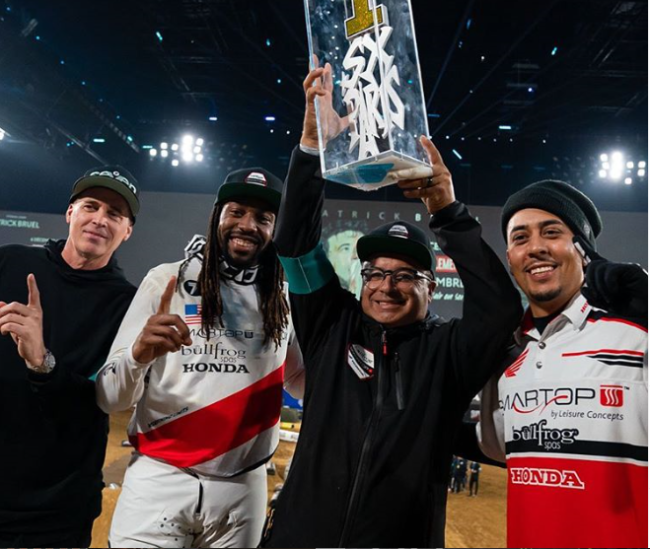 The Smartop/Bullfrog Spas/MotoConcepts Honda team have a very strong team heading into the 2020 Supercross season as they have three experienced and strong riders under the awning.

Vince Friese has been with the team for a number of years and has earned the team’s trust for another season – with his good starts he’ll be looking for good results.

We spoke to Tony Alessi, the team manager and he’s feeling confident heading into the season.

“Vince Friese is a staple on our team and is the longest standing rider. Known as a strong starter and very aggressive expect to see him leading many heat races this year”, Alessi told GateDrop.com.

A new member for the team this year is the talented Justin Hill who certainly has what it takes to be at the sharp end. He’ll be hoping the package from the Smartop/Bullfrog Spas/MotoConcepts Honda team is what he needs to showcase his true ability. Alessi wants him to be on the podium!

Malcolm Stewart seems to get better with age and with his Supercross experience shouldn’t be discounted.

“Hill has the raw speed and talent to be a podium contender. He’s improved his starts and 20 lap moto’s. Malcolm is the most fit of our guys and we all know he can turn it up at will. I expect Malcolm to be a steady top 10 finisher all season”, added Alessi.

Alessi is also happy with the work the team have put in before the first round which takes place in Anaheim this weekend.

“Our team did four off season races along with starting our training and testing in late August while most were still racing motocross”, he concluded.