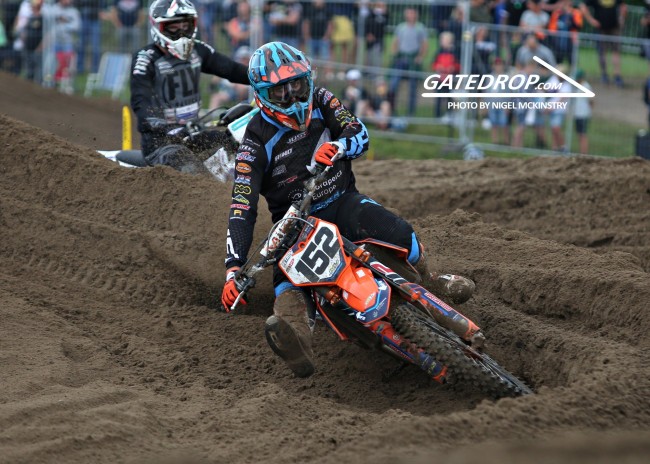 Petar Petrov is one rider whohas a wealth of experience in the Motocross world as he’s been in the GP paddock since the age of 16.

The Bulgarian has had some good results and especially in the MX2 World Championship even getting on the box. Since making the move up to the MXGP class things haven’t went quite as well but he’s eager to change that in 2020.

Petrov’s team last year, the North Europe Racing team have joined forces with the VRT KTM and for 2020 the team will be known as the VRT Nordpesca team.

Away from the track, Petrov has also recently become a father which is a game changer and starts to give you a different outlook on life.

We caught up with Petrov to discuss the season and much more.

Gatedrop: Petar, let’s start with the team – it was the first year for the team in the MXGP paddock in 2019. How was it being part of the team?

Petrov:  It was good. We did a lot of work with organising everything and it was mostly myself and my mechanic so it was not always easy but I thought we did good job.

Gatedrop: The team have changed slightly this year after joining forces with the VRT KTM team – it’ll now be known as Team VRT Nordpesca. Can you explain the changes in the team and how’s everything going so far?

Petrov:  So far everything is going good. It’s changed a bit as it was not always easy for me to organise everything. We spoke with the team boss and he decided that it would be easier this way and especially for me and for the other people that are involved in the team. This way the 2 teams can try and make 1 bigger and better team with more budget and more support from KTM as well as all the other sponsors.

Gatedrop: Just on the 2019 season, how would you summarise the season – where you happy or left wanting more?

Petrov: I think at the end I was disappointed with my season with not having a team after 2018 to doing the beach races and after GP’s it was far from easy for me.  I I felt the moment that my results and speed were starting to get better I got injured in Latvia and after that it was again a struggle. I tried to come back as soon possible but I didn’t feel good with my wrist, it was not ready for racing. I had pain and I tried to keep riding but it was hard.  On the other hand all season was my mechanic and I so was not always easy but we did our best that’s for sure.

Petrov: I’ve been in Belgium and the plan is to stay here until the new year and then off to Spain.  For the moment it’s been hard with the weather but we could always find a track to practice on so it’s been okay.

Gatedrop: For 2020, MXGP is looking so so stacked. What’s your thoughts on the championship and are you ready for the challenge?

Petrov: Yes, it’s really stacked that’s for sure and it seems like we are saying every year that it’s more and more stacked. It’s just crazy but it’s good for the sport to have more winners and more podium contenders, it makes it exciting to watch and makes it fun for the fans. I remember at the Russian GP this season I was on the gate something like 18-19 riders, I am not sure and looking to the left seeing all the guys I think from the 1st guy till 24th everyone had a GP podium. I don’t think you can say that in many sports and with a few more podium guys and a world champion coming to MXGP next season, it will be even more stacked.

Gatedrop: What are your expectations for the 2020 season?

Petrov: The goal stays the same, to try and improve my results. I’ve been for sure struggling since I moved to MXGP and I need to try and make a season without any injuries.  After that I want to improve every race and prove that I can do good in MXGP and not only MX2.

Gatedrop: We are seeing new riders start new teams, Leok a few years ago and now Shaun Simpson and Kevin Strijbos. You must be relieved to have a team behind you but is that something you’d consider in the future?

Petrov: Yes, it’s just so many good riders in MXGP and not enough places so it’s kind of normal for riders to look at other options. I am very thankful that I could find a team and I don’t need to look at this option. It’s not easy at all to find the budget and to able to start your own team so I have a lot of respect for what these guys are doing with starting their own team.

Gatedrop: What’s your plans from now until the MXGP season starts at Matterley Basin with regards to testing and pre-season races?

Petrov: We will do some testing in Spain early January and we will stay there for practice. Then the plan is to do Hawkstone International and Lacapelle-Marvial.

Gatedrop: Away from the track, you’ve recently become a father, how’s that going for you?

Gatedrop: Anyone you’d like to thank and anything else to add?

Petrov: I would like to thank just all the people around me and all the sponsors from North Europe racing for supporting me and the team this year and just everyone involved – Thank you.