Tomac and Shimoda on their podiums at Indianapolis 1 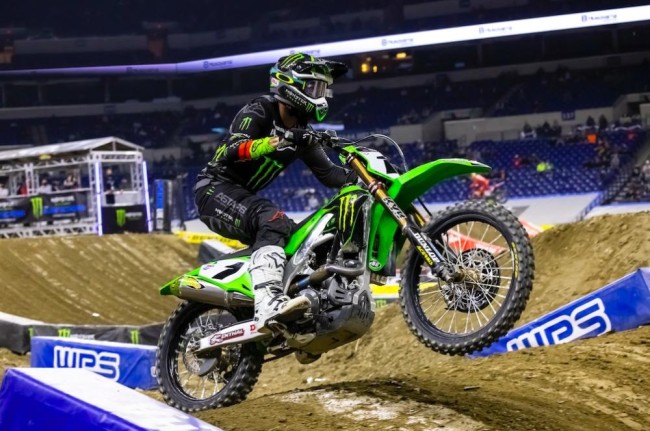 Round 4 of the Monster Energy® AMA Supercross, an FIM World Championship kicked off the first of three races in Indianapolis, Indiana on Saturday evening, where Monster Energy Kawasaki rider Eli Tomac scored his second 450SX podium of the season with a second place finish, while teammate Adam Cianciarulo was close behind in fourth. In the 250SX class, Monster Energy/Pro Circuit/Kawasaki rider Jo Shimoda once again proved that consistency pays off as he piloted his KX™250 to his first career 250SX podium with a third-place finish.

As the snow began to fall outside of Lucas Oil Stadium and qualifying came to end, the No. 1 KX™450 of Tomac stood atop the 450SX class with his 47.194 qualifying time, while teammate Cianciarulo was hot on his heels in fourth place with a qualifying time of 47.388.

Despite the frigid temperatures outside, that did not stop Monster Energy Kawasaki’s dynamic duo of Tomac and Cianciarulo from bringing the heat to the 450SX Main Event. Both Kawasaki riders blasted out the gate aboard their KX450 machines with Tomac grabbing his first holeshot of the season and teammate Cianciarulo in tow. Tomac and Cianciarulo began pulling away from the competition, but a slight tip over by Tomac at the end of the whoop section dropped Tomac to third and handed the lead to his teammate. Cianciarulo began leading the charge for Team Green, leading 10 out of the 20 laps raced in the main event, as Tomac quickly remounted his machine and rejoined the lead pack. Tomac would pass his teammate and challenge for the win down to the last corner, but ultimately finished a close second while Cianciarulo settled for fourth place.

Eli Tomac: “That was an eventful day of racing. We kicked off the day in pole position in qualifying and had a decent heat race working my way forward. In the main event, my KX450 rocketed me out the gate and I was able to get the holeshot which felt amazing. I began clicking off my laps, but I had a slight bobble at the end of the whoops and tucked the front end. I’m bummed that we fell short of the end goal, but really happy with my riding. I can’t thank my Monster Energy Kawasaki team enough for all their support. Let’s go get it done on Tuesday.

Adam Cianciarulo: “I wasn’t 100 percent content on my riding performance today. I felt like I struggled to find a flow, but there are still some positives to take away from the day. We led some laps, we battled with the boys, Eli (Tomac) and Ken (Roczen), and took another step towards our goal of getting on the top step of the podium. I am already looking forward to Tuesday.”

For the Monster Energy/Pro Circuit/Kawasaki race team, the No.30 KX250 of Jo Shimoda lined up at Round 4 in Indianapolis while teammate Austin Forkner stayed behind to heal from a crash suffered last week. Just as he has done all season, Shimoda rode consistently throughout practice and qualified in fifth place.

In the second 250SX Eastern Regional heat race of the night, Shimoda found himself in the top-3 during the opening laps before losing ground to the leaders and tucking the front end just before the finish line jump. Still in qualifying position, Shimoda quickly remounted his motorcycle and began an impressive charge to catch all the way back up to third place where he ultimately finished.

As the gate dropped on the 250SX Main Event, Shimoda found himself mid-pack off the start and came around the first lap in the top-5. The Japanese native rode consistent laps for the 15 minute main event and on the last lap, Shimoda was able to capitalize on a mistake by the riders in front to move his way into third and ended the night with his first career 250SX podium.

Jo Shimoda: “It feels good to get my first career podium out of the way, but I think I could have done better. Craig and Lawrence came together before the whoops which allowed me to capitalize and cross the line in third. I felt good on my Kawasaki KX250 today and even with a tip-over in my heat race, I was able to climb my way back up from mid-pack to third. I’m happy with tonight’s results, but I want more. I’m going to carry this momentum into the next round and take another step towards proving that I am one of the top-3 riders in this class.”