Watson continues positive adaption to the 450 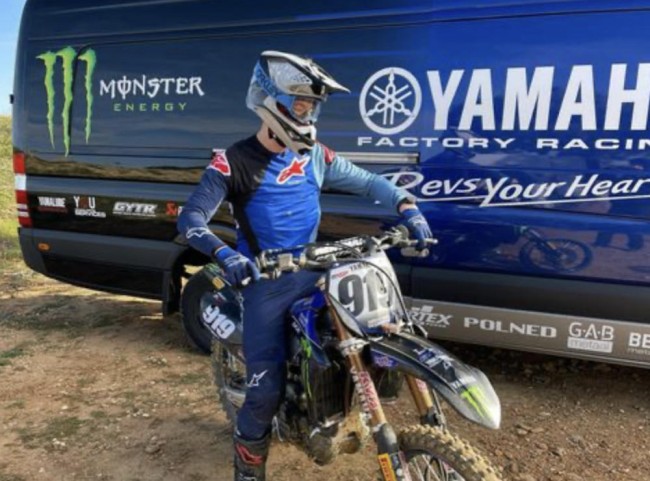 Monster Energy Yamaha rookie Ben Watson finished the 2020 season as one of the brightest and fastest riders emerging from the MX2 category and was obliged to enter MXGP due to his age of 23 years. Initially slated to be a ‘development project’ for Yamaha Motor Europe in a supported team, Watson was instead slotted into the factory squad for his rookie term after the manufacturer restructured their presence in the Grand Prix paddock and were impressed by the maturing Brit’s progress.

Watson, who won two GPs and finished on the podium in five of the last six MX2 rounds, began testing with the YZ450FM directly after the final fixture in Italy in November and has since been clocking the miles on the bigger machine. According to Yamaha bosses the tall #909 has already demonstrated encouraging speed.

“It was important for us to keep Ben considering the [his] loyalty and connection to the brand and, of course, his performances in MX2,” explained YME Off-Road Racing Manager Alexandre Kowalski. “His problem in that class was his height, and with that comes weight; there was sometimes a difference of more than ten kilos between him and Jago [Geerts] and that’s obviously a handicap on the 250 for the starts.”

“It will be very interesting in 2021 because he has even more potential on the 450, and from the first tests and sessions he has been really impressive,” he added. “He was immediately very fast and somehow found the feeling with the chassis easier than on the 250. We’re very optimistic for this year.”

Watson will begin his fourth year with Yamaha in 2021. Even though he stresses his sole objective is to learn and show signs of evolution as a rider and in the premier class, he is undoubtedly finding life on the bigger machine easier. “At the moment I haven’t been doing anything crazy, just trying to get some laps,” he said. “I’m enjoyinglearning the new bike really. Since having a bit of time off my hands went a bit soft and I’ve struggled with blisters but otherwise I’m loving it. Since my test after the last GP in Italy I haven’t changed anything with the bike, I feel it’s more important for me to get used to it and thecharacteristics of the 450 rather than changing loads of stuff right now.”

The same approach worked admirably for Watson’s friend and training partner Romain Febvre in the winter of 2014/2015. The Frenchman was a reluctant debutant in MXGP for ’15 after also aging-out of MX2 but rode the Yamaha constantly to get a base feeling for the demands of the motorcycle and the extra power. Febvre would go on to win the world title that season, still Yamaha’s last in the FIM Motocross World Championship.