Reed on racing Carmichael and Stewart – who was most intense to compete against? 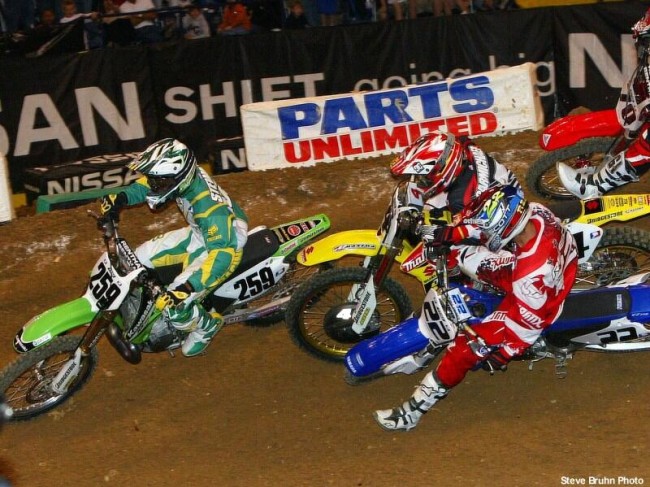 At the end of our interview with Chad Reed we asked who he found the most intense to race against, Ricky Carmichael or Chad Reed, this is what he had to say…

Who was your most intense rival? Ricky? Because that seemed quite spiky 03/04 and obviously James it was a longer period. Who played on your mind the most or who did you feel the most intense towards?

They are so different but they are equal I would say, both of them, it’s hard to say one or the other. The big difference is James had not many, but more weakness than Ricky. Ricky seemingly, from the outside, just never had a weakness. Like a fighter, when you feel like you had him on the ropes, and right as you are ready to try and knock the dude the f**K out and put him out and win, he just found a way back – always! Right when you are okay, you are wearing, wearing, wearing and you are thinking, ‘I’m good, I’m good,’ He would just come back stronger and find something that was another level and you are just like, ‘where did that come from?’

James had the ability, his speed was unbelievable. There were days when you just had to acknowledge you just couldn’t go that fast or the unwillingness to die to go that fast! And so some of those days, I would basically because I was for the most part and easy second, and when he was that good, sometimes I would pull back. And sometimes when you pulled back that’s when he would make the mistakes.

Do you think that is concentration on his part?

Yeah and that was his weakness. Sometimes you would be throwing down lap after lap, after lap and I would be like, ‘ i don’t know if I can go this fast,’ and sometimes if you just let him go and almost gave up and somehow, two laps later, he would somehow cartwheel and you would be like,’ alight that’s it!’ And it didn’t always happen but there was a chance of that, but more often than not he went on and won the race. Somehow there was that concentration weakness that Ricky didn’t have.

And when Ricky crashed he didn’t really get injured somehow…

His bad day was second or third and really third, just always second and a guy that you are going toe-to-toe in the championship, that’s what taught me to be there. I feel like I became consistent nd needing to be there, seconds, seconds, seconds, thirds, thirds thirds when you couldn’t win, you had to be on the podium just because of what I learned from Ricky.

It’s hard to say, but Ricky probably gets the nod of most intense because of the ability to find everything you had to beat him.

You can listen to the full interview here on iTunes or below on Spotify or YouTube: