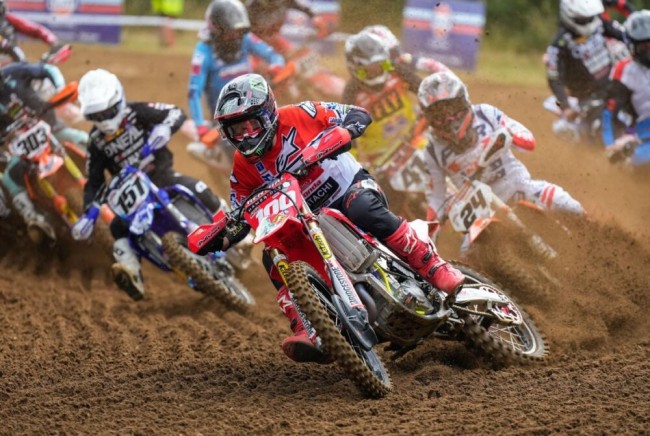 With the Michelin MX Nationals powered by Milwaukee at the half way stage, the intensity and pressure is starting to hot up at the sharp end as the championship rolls into Cusses Gorse MX this weekend.

While the immaculate Harri Kullas (Cab Screen Crescent Yamaha) has a healthy lead of 46 points in the Leatt MX1 Elite class, over Josh Gilbert (SC Sportshomes Husqvarna) in second, with Tommy Searle (Crendon Fastrack Hitachi Honda) another point further back in third, it’s all much spicer in the Apico MX2 Elite class. Tom Grimshaw (Chambers Racing Husqvarna) currently has his hands on the championship leader’s red plate and with it being the first time he has led a pro championship he will not want to let go of it until it turns to gold. He’s going to have to work hard for that to happen as he has a confident Jamie Carpenter (GRT Impact KTM) only 17 points behind and he’s turned plenty of laps around Cusses Gorse. Third in the the championship is Calum Mitchell (Fabrican Racing Team) just another 8 points behind Carpenter and he’s also putting together a solid and consistent championship with plenty of racing left to run.

The Michelin MX Nationals haven’t just proved great racing over the years in the Fastest 40 Elite classes though, the varying other classes bring so much to the table and make the championship what it is, with a packed two days of racing. That will very much be the case again at Cusses Gorse, with the RFX Expert, Motoverde Amateur, Moto Connection Clubman MX2, Worx Sports Insurance Clubman MX1, Seven 125/250 Youth and Syntol Lubricants Open 85cc classes all battling hard in their own right for championships that mean a lot to them and British MX.

There’s also the now annual running of the MX Nationals ‘Straight Rhythm’ on Saturday night, after a full day of race action out on track. The 2022 ‘MXN Straight Rhythm’ presented by Phoenix Tools, Carbon Comps and in memory of Melvyn Brunell will provide a brilliant night’s entertainment with most of the U.K’s top Supercross and Arenacross racers going side by side to be crowned champions. Reigning champions Dylan Walsh (MX1) and Florian Miot (MX2) will be joined by Dylan Woodcock, Jack Brunell, Josh Gilbert, Adam Chatfield, Joe Clayton, Jordan Booker, Chris Bayliss, Matt Bayliss, Ben Clayton, Scooter Webster, Calum Mitchell, Gareth Padgett, Aaron Ongley Alfie Smith, Charlie Putman and Ash Greedy all lining up behind the BMX style drop down gate ready to lay down from one end to the other as quickly as they can.

If you can’t make it out to Cusses Gorse and soak up all the action you’ll once again be able to catch all of Sunday’s action on MXN-TV on YouTube and Facebook starting at 9.30am as well as live stream coverage of the MXN Straight Rhythm on Saturday night at 6.30pm

Spectator tickets are £10 for the Straight Rhythm or £20 for a full weekend ticket to take in both days of the Michelin MX Nationals powered by Milwaukee out on the full MX circuit and the Straight Rhythm. Weekend camping is £10 per vehicle.