Josh Grant interview: I’m happy with my season so far! 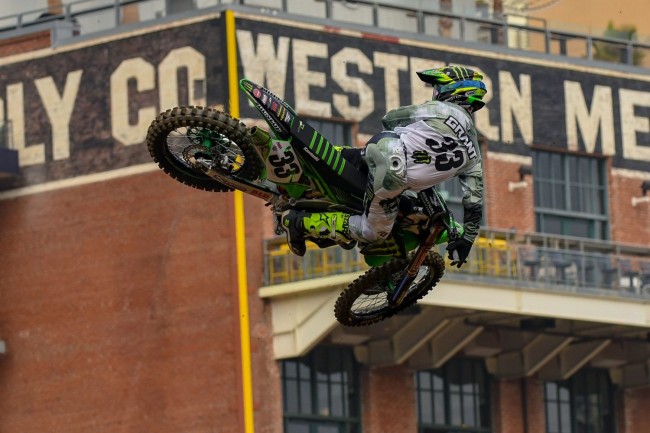 Josh Grant has had a steady start to the supercross season but the Kawasaki rider has upped his pace in recent weeks and looks to be a top five threat.

Doug Turney caught up with Josh to talk about his season so far at press day in San Diego.

How did you feel about Oakland last week in the ruts?

Yeah it was petty hectic. When we started for first practice it was already getting deep. When we walked track walk it looked like it was going to be a pretty hard-based track but underneath that layer was really soft. It wa fun it was definitely difficult, there were a lot of mistakes being made. That whole race was pretty much being able to accomplish jumping all the jumps and rhythms consistently and you were going to have a good night. It changed the approach to racing a little bit more that a normal track because it was about limiting the mistakes.

How does this track compare to last weeks?

The dirt is a lot different, it’s more hard-pack. We have only ridden a couple of sections, it seems really tight with a couple of sharp jumps. They will probably slow it down a little bit, it might be similar without the ruts.

The start here is pretty short, does that change your strategy?

It doesn’t change much, obviously your whole goal is to get out front, I feel like that’s 80% of your main event. It looks really narrow all the way down into that first turn. I feel it will bottle-neck pretty heavy, so I feel it will be a lot different to the last few rounds where the first turn was swept and opened up. You will probably see a lot of tangles there in the races.

What do you think of your season so far?

I’m happy with my season so far, the goal at the beginning was to be inside the top ten and be a top ten guy. I have always stared off the season a little bit slow due to injuries or not being fully prepared. This year I am fully prepared and I knew being inside the top ten was a good starting point for me and the way I am feeling riding the last couple of weeks, I feel I can be in the top five, I have had some good rides, it’s about limiting mistakes and really capitalising on a good start and I need these things to line up in the main event and I think I will have a good weekend.

After San Diego we go to Dallas, Tampa, How does that affect your preparation during the week, does it cut down on your riding time?

I already started that, being a little bit older, I focus a lot on recovery, I am not able to come home and go riding for the next four days before we go race again. I think it will change a little bit more and ease off on the riding just due to the long flights from the east coast back to California, I won’t be staying out on the east coast like a lot of guys do – we have baseball practice and a lot of fun stuff at home (with his son). It’s going to be a bit of a challenge but I like going to the East coast just because the dirt is really good, I like tacky dirt and having ruts, I don’t think I need to practice every day to feel it, it’s kind of exciting to go there and be excited about the good dirt instead of being used to it!