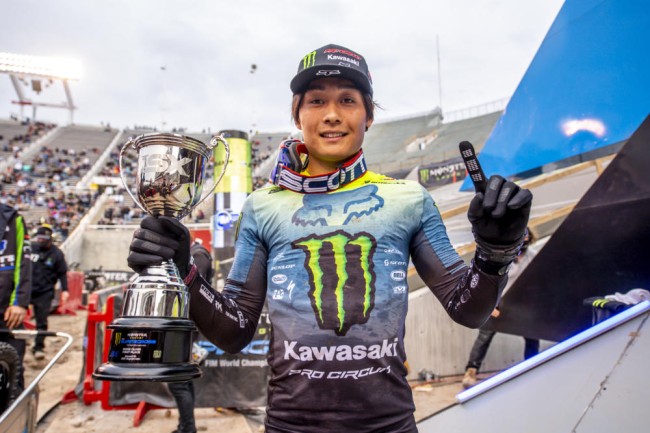 As the 2022 AMA Pro Motocross Championship concludes, Monster Energy®/Pro Circuit/Kawasaki rider Jo Shimoda is gearing up for a busy post-season race schedule. The Japanese-born rider will visit his native country to compete in Round 4 of the All Japan Motocross Championship at Meinhan Sports Land in Kinki, Nara, before returning to the U.S. to represent Team Japan in the MX2 Classification at the 2022 Motocross of Nations (MXoN) at Redbud MX in Buchanan, Michigan.

Since his professional debut in 2019, Shimoda’s race-winning success has placed him among the best Japanese names in motocross history. In 2021, Shimoda etched his name in the archives of Japanese motocross as the first rider from the island nation to win a Monster Energy Supercross Main Event. In 2022, Shimoda pioneered another Japanese-first when he won the AMA Pro Motocross overall victory at Redbud; an achievement he swiftly repeated with another overall win at Unadilla. As Shimoda continues to compile impressive accolades, the youthful Japanese rider is proving himself as a championship threat in the premier racing series, Monster Energy Supercross and AMA Pro Motocross, and establishing himself as one of the best Japanese racers in the history of the sport.

With his sights set toward the upcoming Meihan Sports Land National in Japan, Shimoda looks to race his Kawasaki backed KX™450SR to the top step of the podium in front of his home crowd before traveling back to the United States for the distinct honor of representing his country at the 2022 MXoN aboard his Monster Energy/Pro Circuit/Kawasaki KX™250.

“I moved to the U.S when I was in elementary school to compete at the highest level of amateur motocross. Since turning professional in America, I haven’t had a chance to go back home and battle with my old friends, so when the opportunity was brought up, I immediately said yes. I’m looking forward to competing in Japan for the first time in seven years. I’ll be on a Kawasaki KX450SR and will do my best to live up to all expectations. Similarly, it’s an honor to be selected for Team Japan and represent the Japanese people at the Motocross of Nations (MXoN). I earned my first overall win at Red Bud earlier this year, so I hope to continue that success and make everyone back home proud.”
– Jo Shimoda.

Round 4 of the All Japan Motocross Championship at Meinhan Sports Land in Kinki, Nara is set to take place on September 10-11.

Premier riders from each nation will team up to compete for the 2022 Motocross of Nations Championship at Redbud MX in Buchanan, Michigan on September 23-24.