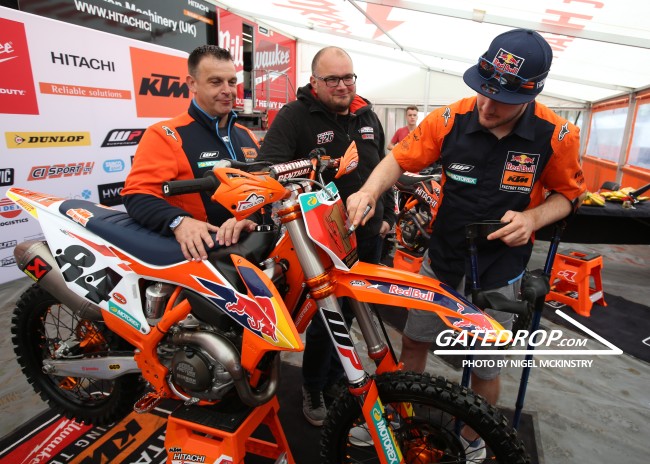 Jeffrey Herlings was a very popular man at round five of the British championship at Desertmartin where he appeared as guest of Roger Magee’s Hitachi KTM fuelled by Milwaukee squad in what was a home race for the Northern Irish ran team.

From the moment he got there, Herlings, personally sponsored by Milwaukee, was swamped by media and fans, a lot of whom had never saw the fastest man on the planet in person. The autograph queue was long and constant all day but Jeffrey was kind enough to give us ten minutes of his time to talk about what has been a very tough year as well as what he thought of the track at Desetmartin.

Jeffrey, you are here at Desertmartin, we were hoping to see you racing but unfortunately it didn’t turn out that way – but it looks like your sort of track!

Yeah it’s an awesome track. It’s definitely on my bucket list to come and race here. I really like this track, even if I didn’t have an injury I wouldn’t have been racing but maybe in the future we can go out and be racing, we will see it’s a great track. I like being here, it’s a shame I’m not racing.

Yeah that would be nice, it’s a bit sandy – I like sand, that’s nothing new! That’s why I say it’s a shame I’m not racing, but hopefully in the future they will hold a GP.

The only shitty thing about Ireland is it rains a lot (smiles as a heavy shower hits the track during interview). Even now mid-summer it’s still raining! I think the track is definitely capable of having a GP, why not!?

On your injuries, the last one, I don’t know you managed to win a race with a broken ankle! How did you do that?

Compared to what I had with my foot, this is peanuts, we are just two weeks in and I am already walking a bit. It was a pretty clean break and we will see how things will turn out. Hopefully I’ll be back as soon as possible, but I don’t need to ride for a championship so there is not really a rush but yeah, just try to get healthy and once I’m healthy think about racing again.

That first injury plus this injury, how do you deal mentally with that, motocross is basically your life and you are not able to ride your bike, is it difficult to keep coming back from this?

Yeah, if you do a wrist or a hand you can still go running or cycling but with a foot you can’t do anything, you can’t even walk. It’s a shame, it’s the third time I need to re-group this year. In the winter you have your time off from, then you prepare for the season, I was fully fit then got the foot injury then had to come back again, I was starting to feel good, four weeks on the bike and winning a moto in the GP, then I got injured again and have to come back from this once more.

It’s a pity but there is nothing I can do about it. The crash in Spain was my own fault but this one, obviously I tipped-over, but then someone ran over me so it was really bad luck. When it’s not your year it’s not your year and I feel like this is definitely not my year!

Was it a good boost to still win that moto in Latvia?

You know, I went to Russia with a different mental attitude, it was my first race back and if I got top five I would be happy, I got fourth and that was good, when I went to Latvia I wanted to win and if I’d went to Germany I wanted to win as well.

At one point I thought I had just hurt my ankle and there would be some swelling then after a week it would be okay, but then I could feel the bone, (makes noise of bones grinding together) and I was like, ‘ no this ain’t good.’ Mid-way through the moto I thought I had broken it. In my post -race interview I said thought I’d broken it and then we did the X-Ray’s and the doctor couldn’t believe I had even rode and finished the moto with that ankle.

I had surgery straight away on the Tuesday and got it repaired, all the injuries, it takes a toll on you, but it’s part of racing.

A lot of people know the talent you have to ride a bike but sometimes your will to win is even more impressive! You rode with a not fully healed femur to try and win the MX2 title, just won a moto with a broken ankle. What do you have inside of you that makes you reach those levels?

I have a big desire to win. A human being can take so much – but at one point it’s enough. It’s tough mentally to always have to ride in pain or come back from injury and people expected you to podium or win. It’s definitely mentally tough, that’s why I just want to heal up and if we can do some races at the end of the year that would be amazing.

I just want to heal up and be 100% healthy, otherwise there is no point racing. For KTM I just want to represent them the best possible way, last year we won 17 out of 19 races we raced and came second twice. I think for them it’s important we come back healthy and show what we are capable of as a team and me as a rider.

You were riding and also training at a really high level last year, and you said at the end of the season you were looking forward to a break. Will all this time off maybe help you in the second half of your GP career, because you get a bit of a break from all the racing, training and travelling?

Yeah it did, I basically had almost a year and a half off. If you look from last year when I had time off, (after MXoN) until basically March next year, yeah I did a few races and prepared before the season started, so it’s not fully time off but, yeah I don’t know what to say about it (injuries). Let’s heal up and get the number one plate back next year – but it’s important to stay healthy, that’s the most important thing.

I feel you get a bit of an unfair reputation on crashing, you actually rarely crash in races. Tim Gajser has probably had more big crashes this year. Is it frustrating that you don’t seem have crashed too much when racing recently and people still think you ride over your head in the races?

I mean I don’t want to judge about Gajser’s crashes but everyone has seen his crashes! My one, I got my foot between a wall in Spain and had a small crash, it was like peanuts – I just can’t believe I shattered my foot with that one! Then in Latvia a small crash and somebody ran over my foot, I can’t believe the bad luck I’ve been having. If I’d had the crashes Gajser has had this year I would probably be dead by now!

Either he is just really flexible or having a lot of good luck. The crashes he had in England, Valkenswaard then the one in Mantova, the start crash, he could have broken his neck in that one. He has been very, very lucky but it’s just his year, I think he will win the championship this year, he and Tony have been the best but when it’s your year it’s your year and when it’s not it’s not. He’s having his and I’m not having mine!

The Nations at Assen I guess is your big goal now, you (team Holland) we’re very unlucky last year, is it good to have that to look forward too and be motivated for?

The Nations is about three months away I believe, but I can’t really do anything, I can’t run, I can’t cycle I can’t do anything. First I need to get healthy before get training, so even that will be a short amount of time (to be ready). But to be able to finish off the year good with a good feeling and put it on the podium with the team would good. But it’s still far away and a lot can happen, so we will see.

The American media are already making reasons for America not coming this year, but I’m sure you are hoping they will turn up so you can race Osborne/Webb/Tomac or whoever they pick?

Yeah that would be nice (to race them) but I am not in a position to say ‘hey you guys need to come and I want to beat you guys.’ I haven’t raced all year, I haven’t shown anything all year, so I just shut my mouth. We will see how things turn out, last year I was the man to beat but this year I haven’t won anything or shown anything.

Finally, it has just been announced that Jorge Prado has signed for another four year with KTM in MXGP. It looks like he will be your competition soon, what are your thoughts on him as a rider and racing him?

I haven’t really watched the races too much this year and haven’t watched MX2. But when you look at the championship and the competition, it’s not the competition that maybe we faced six or seven years ago with Roczen, Osborne, Paulin, Tommy Searle. I think now the competition is weaker, also he has the perfect body for an MX2 bike, he is, I don’t know, around 65 KG and on the best bike in the MX2 world championship, so he holeshots most of the time and he is the fastest, and fully healthy so, I think he has been doing good but the 450 is totally different.

The competition is much stronger, it’s different. Right now he is a pretty small and thin guy but when he goes 450 he might need more muscle, although you see with Marvin Musquin he is a pretty thin guy and he can win 450 races, so it doesn’t mean that could be his weak point but we will see.