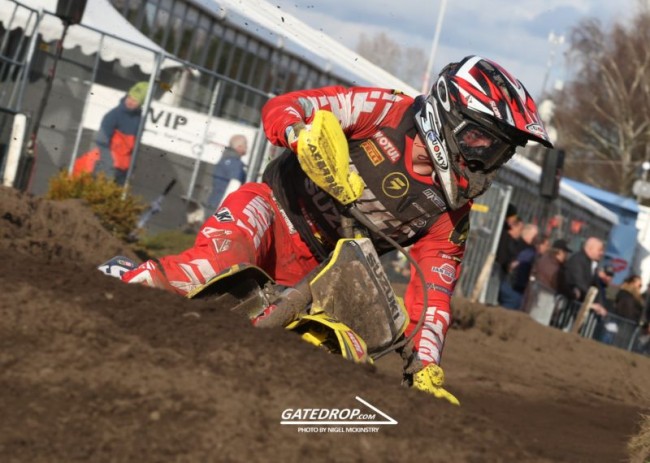 Young Dutch talent, Bas Vaessen has a lot of talent but since making the step up to the MX2 World Championship hasn’t had the results some might have expected the previous few years.

However, Vaessen has signed with the Hitachi KTM fuelled by Milwaukee and is like a new rider in 2019. He’s starting to show the results and speed that’s been expected of him in the past.

We caught up with the friendly Dutch rider to talk about his win at the British Championship at Desertmartin, his MX2 season and much more.

Gatedrop: Bas, a great day for you showing some very good speed. I would say the quickest MX2 rider but you just ran out of time in the second moto to make it the perfect day.

Bas Vaessen: All day long I was the fastest. In qualifying, I was the fastest. In the first moto I got the holeshot and immediately pulled away to pull a big gap so that was all good. In the second moto I dumped the clutch a little bit too much so I got like fourth or fifth out of the gate. I made some quick passes, I was trying everywhere to pass Walsh but I just couldn’t. I was faster so it’s a little bit frustrating. In the end we got the overall win so I am happy about that.

Gatedrop: The track seemed pretty one lined, did you find that? You were all over Walsh but just couldn’t find a spot on the track to make it happen.

Bas Vaessen:  Yeah, there was a lot of places I was faster but then you’d get in the same line again and I’d be a step behind him. That was a little frustrating. I thought it would get a lot rougher but it wasn’t rough at all, okay, some spots were rough but it was just easy. The track was quite easy to ride. I would have liked it a lot more rough.

Gatedrop: The track today actually reminded me of Latvia quite a bit on race day because they groomed that track every chance they got.

Bas Vaessen: Yeah, I would say they were about the same.

Gatedrop: This is your first time racing here at Desertmartin, you probably don’t know much about Motocross here but driving in and seeing that track what where your thoughts?

Bas Vaessen: Yeah, normally I just take a look at the track and don’t walk the complete track but I saw it and immediately fell in love with it. It’s such a beautiful track and beautifully prepared. It was an amazing track.

Gatedrop: Just on the GP’s, I feel like you’ve really stepped it up this year with your riding. What would you put that down too and are you happy with how it’s going?

Bas Vaessen: Yeah, I am really happy. At the beginning I was being a bit more patient, I thought I had my bike setup all ready but practicing and racing is a lot different. When racing it was a little bit different because I rode a lot with Japanese bikes and in the race it was quite a big difference. I was still finding the right setup for me during the first couple of races but now I am finding the setup good. I feel like I pretty much have everything under control now.

Gatedrop: You are riding with so much flow and confidence lately. I was in Germany and was really impressed with how you were riding. It’s almost like you’re letting the track come to you instead of maybe over pushing and you’re hitting all your marks much better?

Bas Vaessen: It’s possible now to do it. Before I was on the Suzuki, the Suzuki was a great bike. With the Honda, the chassis and the suspension was good but you had to ride a bit too fast for the bike to keep up with the other guys. Those bikes they weren’t that quick, they didn’t have the quickest of engines so most of the time I had to ride faster than the bike would let me. That is why I’ve had a lot of injuries but now I’ve got a solid engine, solid suspension, solid bikes and a really good team. Now I can focus more on my riding instead of pushing so I feel like that’s been beneficial.

Gatedrop: I feel like in the past you’ve been under a lot of pressure to perform, especially at Suzuki with Everts. Whereas this team, the atmosphere seems a lot more relaxed, you can have a laugh and share a joke. Also, they are maybe leaving you to your own devices as long as the results are good. Is that all helping take the pressure off?

Bas Vaessen:  Yeah, the thing is, with this team, they are really open. They say, “okay, we give you the tools, you work with it”. From the beginning, that was one of the reasons that put me into the team because the team were like, we will give you a bike, mechanic, a van, you do your own program and we will trust in you. They said they trust me and that is an amazing feeling that the team trust me even though I am new to the team. From the very first moto on, they give me that trust to do my own program, to do my own thing so I think that was a major point for this year.

Gatedrop: Have you set yourself a target you’d like to achieve before the end of the season? Lommel is coming up and that’ll be a big GP for you!

Bas Vaessen: Yeah, I am going for a podium there. To say a win, obviously you always want to win but Prado is riding so well. I feel like if I could get a podium, maybe second or third. If I could beat everyone but Prado then I can finish the season happily.

Gatedrop: How would you describe the level of the MX2 World Championship? Some guys from last year moved to MXGP or to America but this year still looks really deep to me.

Bas Vaessen:  It’s strange. Before there was always like 2, 3 or 4 guys would be blazing fast, they would be much quicker than the rest then 5-15 would be alright, they were always good riders but now it feels like you’ve got Prado and then from second to twelfth – they can all get a podium on any given weekend.  I feel like that’s the big thing this year, the level is so so high that really the first 12-13 guys can all get a podium on any given day.

Gatedrop: I’d like to ask you about the MXGP track prep this year. They seem to be doing a lot grooming this year, do you like that or would you rather they didn’t groom them so much? Rui Goncalves seems to be the guy calling the shots so what’s your message to him.

Bas Vaessen:  I feel like he wants to keep it save and I feel like it’s okay to touch the jumps and maybe sometimes a corner if it gets too rough. My standpoint is they should always do jumps, that’s the major key because that’s where the biggest things happen. I feel like they are doing too much in the corners this year, they should let the corners a little bit more of what they are because then I think we’d see more passes.

Gatedrop: Just on the British Championship, what are your goals for the last three rounds?

Gatedrop: If you do that you have a good chance of winning that title!

Gatedrop: Have you got a deal with the team for 2020 yet?

Bas Vaessen: I have got a deal. I am staying with Hitachi KTM, last year I signed a two year deal with them. From this point on I’m still staying with the team, I am really happy with the team at the moment so I’m enjoying my time here.

Gatedrop: You’ve two more years in MX2 after this year, things should only continue to get better for you after so far a solid 2019..

Bas Vaessen: Yeah, with Suzuki I had a couple of really good moments. I got a couple of top five moto’s, got one top five overall finish in Ottobiano and even though I missed half the season due to injury. I still had quite a few good races but last year with the Honda I was struggling to get into the top ten so it’s really refreshing to be up front with all the other guys.