Interview: Tim Gajser on winning in Lommel, closing in on the title and MXoN 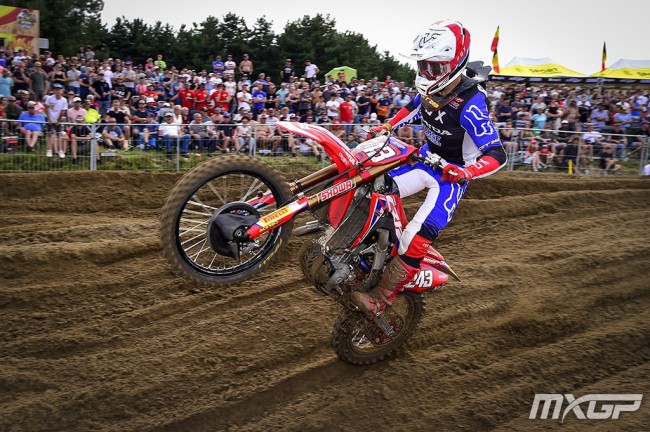 Tim Gajser didn’t quite do enough to clinch his third Motocross world title in Lommel so he’ll have to wait another two weeks in Imola to lift another MXGP World Championship.

The HRC Honda was still in impressive form in Lommel at a track that isn’t a track he always does well at as he prefers the hard pack tracks but he won in Lommel.

Gajser could have played it safe and not took any risks but he still wanted that GP win and by going 1-1 it meant he got another overall victory this year.

We caught up with Gajser to discuss Lommel and much more.

Gatedrop: Tim, Lommel isn’t exactly a Tim Gajser track but you didn’t let that stop you this weekend winning in the deep sand, you must be very pleased to win here?

Tim Gajser:  Yeah, definitely. In the past I was always struggling here. This year was quite mentally tough, I prepared myself better mentally and physically for this track. I felt good, I already felt good during the qualifying race as well as the warm up. In both moto’s the start was really important and I took two good starts, the second one a holeshot. I raced a smart race, tried to push at the beginning to make a gap and then just ride smooth until the end. I managed to finish two times second for the overall so I’m really happy.

Gatedrop:  You say you prepared yourself better this year for this race, did you do more sand riding than before or what would you put it down too?

Tim Gajser:  With the team, we have put a little bit more time in riding and testing in the sand. In the past we didn’t have so much attention for the sand tracks. Also, myself, I didn’t train so much in the sand but this year I trained a lot in it and I think that’s the key.

Gatedrop: How was the track out there? I think that’s the roughest it’s been in a few years from memory.

Tim Gajser: I would definitely agree. I think it was really rough and especially the second moto. They didn’t do much (track prep) between the moto’s or even overnight. From yesterday until today they just flattened the take off, landings which meant they left the corners and everything else so it was really rough.

Gatedrop: Do you like that they didn’t do much track prep this weekend compared to some GP’s this year? or would you rather they flattened the track more this weekend?

Tim Gajser: It’s easier to make a difference when it’s rougher. Definitely, it was tough for all of us out there, it was a good race.

Gatedrop: It’s pretty much certain now you’ll win the title in Imola and you’ll have a lot of home fans travelling to the race there. Just how special will that be for you?

Tim Gajser:  Yeah, definitely. If it is going to happen, I think the best place for it to happen is Italy. All the team is from there and it’s really close to Slovenia. It’s definitely going to be an amazing GP.

Gatedrop: Last year Slovenia didn’t do the Motocross Des Nations, have they confirmed yet if they’ll race this year at Assen?

Tim Gajser: Yeah, we are going to do it this year.

Gatedrop: Are you looking forward to Assen? It’s another tough sand track.

Tim Gajser:  Yeah, definitely. Now I am starting to enjoy the sand as well and I’m really looking forward to that one.