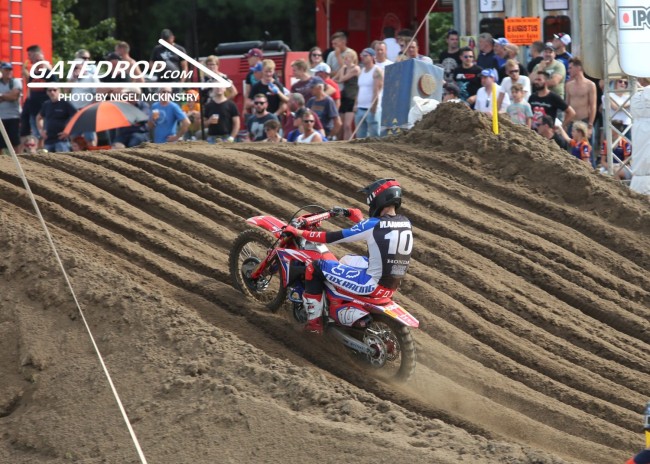 You wouldn’t think it when you see Vlaanderen ride but he’s missed five rounds of the MX2 World Championship rounds through injury. Since making a return to racing in Indonesia he hasn’t needed much time to get back to the front.

Vlaanderen ended up second overall at the brutal sand track of Lommel to get back on the podium.

The podium comes at a good time with the Dutch Motocross Des Nations selection for Assen just around the corner.

Gatedrop: It was a good weekend for you getting on the box here at Lommel. Can you talk me through your races?

Calvin Vlaanderen: Second overall, it’s pretty cool. The first race, I had a really bad start down in thirteenth but came back to sixth. I went down with a small crash and went back to thirteenth again but fought my way back up to seventh which is where I finished. In the second moto, I had a better start. I was running in third and got passed by Jago (Geerts) and Ben (Watson). I could get passed Ben again and then I got Vialle too. Jago’s bike then broke so I was a little bit lucky with that. I rode home for second and I was quite happy with finishing there.

Gatedrop: After finishing seventh, you probably thought a podium wasn’t possible today never mind a second overall. That’s the joys of Lommel I guess, anything can happen..

Gatedrop: What was your thoughts on the track out there? It was really rough obviously but I think it was even worse than last year from my memory anyway. Do you enjoy that sort of track?

Calvin Vlaanderen: It feels like every year it gets rougher and rougher out there. Honestly, it was really brutal today. The more rougher it got, the more better it got because it kind of got long smoother bumps. Yesterday, it was kind of choppy but smaller bumps. I preferred it the rougher it got out there.

Gatedrop: In GP’s this year, they seem to be doing a lot of track prep to certain tracks this year. Was it nice to race a really rough track again?

Calvin Vlaanderen: Sure, I really like it when it’s rough and technical with a lot of lines which makes it easy to pass. I think they need to stop making them so flat but today, they fixed the take off and landings as well as some really bad sections. But I think the track overall was pretty good.

Gatedrop:  You obviously missed quite a lot of racing and some guys when they’re back they need time to run at the front again but you don’t seem to have such problems. What’s it like being right at the front straight away again?

Calvin Vlaanderen: I would like to be more at the front. I want to battle with Jorge (Prado) a little bit more. Today, it was tough, Yesterday I saw he had good feeling and was fast. I don’t think any of us could really get that close to him today. I think hard pack is a little bit closer so maybe I’d like to battle out with him. But like you said, after the injury I’m doing good. I still worked hard while I was injured, I knew that coming back it wouldn’t be too tough. Mentally it’s always tough but it’s part of the game. I try to work mentally and physically and I’ve came back pretty strong after my injury.

Gatedrop:  There’s a lot of talk about the Dutch Des Nations team that will head to Assen. I think it’s between yourself and Roan van de Moosdijk for who will ride MX2 but I guess you’re hoping to be the one to get the nod to race in Assen.

Calvin Vlaanderen:  To be honest with you, I don’t really mind. If they choose me to ride I will be really happy and do my best for the country. If they choose Roan, I am supporting him, he’s a good rider and deserves the spot as well. It’s up to them, they can make the decision. As long as Holland wins at the end of the day I will be happy.

Gatedrop: There’s a lot of riders looking rides in MXGP next year and you’re one of the guys moving up from MX2. Is there anything in the works for you, any talks?

Calvin Vlaanderen: I don’t know what I can say and what not but I know that I don’t have a ride at the moment. I’m still looking for a ride and that’s pretty much it.

Gatedrop: There’s been rumours floating about that HSF Logistics could start up a team again. Have you heard anything about that or is it nonsense?

Calvin Vlaanderen: No, that is nonsense!