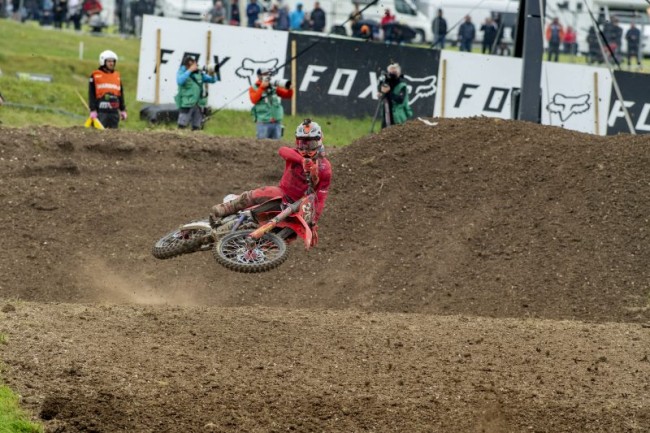 It has been an almost perfect start to the season for an in-from Tim Gajser. The reigning MXGP world championship has somehow lifted his level even higher for 2021 and has won three of the first four motos of the season. We caught up with the amiable Slovenian to discuss his British GP, that brilliant second moto win and his impressive start to the year.

That first moto maybe wasn’t what you wanted but you had a pretty phenomenal ride in the second moto with a last lap pass for the win, you must feel pretty good about how the day ended!

The first race, the riding was not bad. Like I mentioned in the press conference, the track was quite flat first moto, not many lines and it was kind of difficult to pass, so everybody was fast because it was difficult to make a difference. I was happy for the fourth. I didn’t want to risk, I was just waiting if someone was going to make a mistake, if you wanted to pass you had to go over your limit a little bit, so I didn’t want that.

For the second one I take a little bit better start, I made a couple of good moves in the beginning and then I was behind Romain but by the time I got into second place, Romain had quite a comfortable lead already, so I tried to get that gap down. Then I was just following him and just waiting because I ran out of my tear-offs as well with five minutes to go. I didn’t want to be right behind him all the time because I got roosted pretty hard. The last lap I say, ‘I have to try’ you know?! We passed each other a couple of times so it was nice, I enjoyed it a lot so it was good.

That second moto, the start of the it was very intense, all you top riders fighting all at once, you were battling with Tony as well and then Romain right at the end, do you enjoy that battle or do you prefer it just like Russia first moto when you just went away and cleared off?

I think it was good racing, we had quite a good crowd, of course they were just allowed 4,000 people but at least we could hear them around the track so that was good. I enjoy it a lot, it’s nice when you are battling because the race goes quicker! When you are in front and just turning the laps, it goes slower, so it was good.

Just on the track, it looked great at the end of the EMX races yesterday, I was hoping they wouldn’t level it, what were your thoughts when you rode it this morning?

I thought they would have ripped it a little bit. Okay, I know they were afraid of the rain situation but in the end it turned out not to rain so the track was quite hard, the bumps were harder than usual, less ruts in the corners. It was lets say, a bit of a different Matterley Basin that what we were used to.

You seem to go well whatever the conditions here, you have always been fast on this track!

Over the winter you seem to have got even faster. Russia, I think that second moto was, I don’t know what you think, but it was maybe the best moto of your career. That’s three of the four motos you have won now, it’s a phenomenal start to the year. Have you done anything different over the winter, do you feel better?

I had a good winter. The most important thing is that I stayed healthy and injury free so you can improve yourself, you can train normally and you can get better. Always I just try to search for weakest points and try to work on it. Even if you are world champion you can still improve yourself, you can get better. The difference is not big but you can step by step, little steps, get better in some places. That’s what we are doing during the winter.

You seem very calm, even coming through the pack this year. Sometimes (in the past) you have had a few big crashes, but this year you don’t even look on the edge you look very in control.

Yeah, I try to improve from the past years. I did quite a lot of mistakes in the past – big crashes! I try to learn from them and not repeat them. So yeah, hopefully this season goes good. I am feeling really good, of course we are just in the beginning, the second GP of the season, still a lot of GPs to go but overall I am super happy.

You can listen to our review of a brilliant British GP on iTunes or on Spotify or YouTube below: