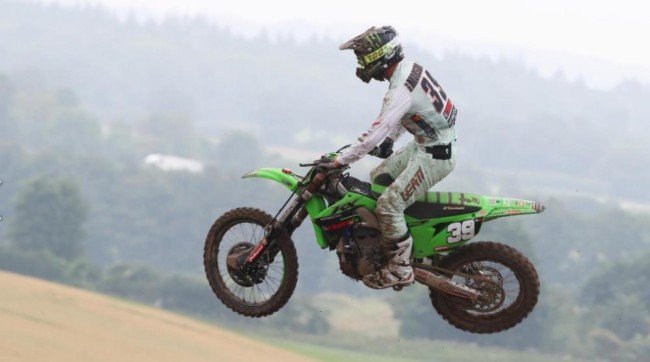 The MX2 GP at Matterley Basin produced some fantastic racing and the drama started in free practice. After attempting to ride a few laps, current MX2 World Champion, Tom Vialle decided to pull out of the GP due to a hand injury.

Vialle had been putting in the laps at Lelystad in the Netherlands to prepare for the second round of the MX2 World series when he collided with F&H Kawasaki rider Roan Van de Moosdijk in what was a complete freak incident.

We caught up with Roan Van de Moosdijk who was kind enough to talk us through what happened.

“The track was prepped really deep and there were a lot of ruts on the start straight. I was concentrating on my start to get as good as possible through the ruts off the gate. There were so many ruts that another rider took absolutely the most outside rut possible on the start straight and I was a little unbalanced and unfortunately we had a head on collision. It was a very unlucky moment but it was never intended on purpose”, Van de Moosdijk told GateDrop.com.