Interview: Thomas Covington on his season and going back to the US 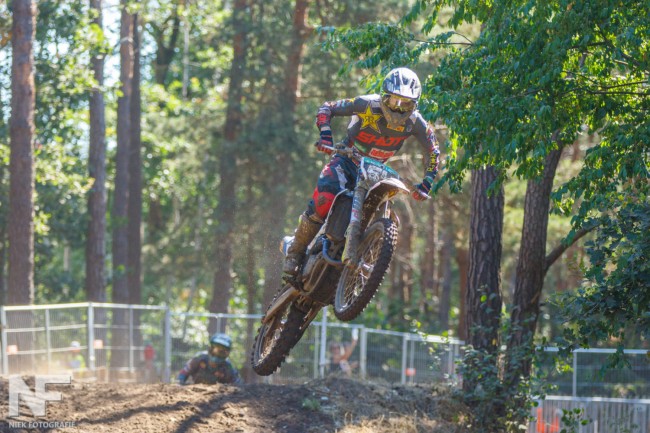 Young American, Thomas Covington has improved a lot since leaving America and racing the MX2 World Championship. The Rockstar Husqvarna rider has made the decision to go back to America next year to race Supercross and the Nationals over there.

Covington can go back to America proud of his GP career as he’s won plenty of GP’s during his time in the paddock.

We caught up with Covington to discuss his season so far and on going back to America.

Gatedrop: Thomas, not too sure if you’ve rode the Zwarte Cross festival before but what’s your thoughts on the festival and the motocross race?

Thomas Covington: This is my second time here competing at the Zwarte Cross.  It’s an awesome event, it’s a cool atmosphere with all the crazy fans. Also with the music, the two things I love the most – music and motocross! It’s cool to see those two things come together. Unfortunately, this year I’m not feeling good. I’ve been kind of sick ever since we got back from Indonesia and not getting enough sleep, my immune system is a bit run down. I did what I could to finish off third in the championship, it’s a little bit of a bummer to end the Dutch championship like that but that’s the way it goes sometimes.

Thomas Covington:  I don’t think there’s anything like this anywhere. It’s cool how motocross is such a big part of the event and has been since the beginning. That’s pretty cool to see, there’s a lot of music festivals here in Holland and Belgium but to bring in motocross I think creates a cool atmosphere. The fans seem to love it so hopefully it’ll keep growing, maybe I can come back sometime.

Gatedrop: Considering you’re not too well, the first moto went decent for you but the second moto didn’t look fun for you having to come back through the pack and it was hard to make passes too!

Gatedrop:  Just on the GP’s, ever since you’ve announced you’re going back to America next year everything has fell back into place for you after a tough start to the season and also with the knee injury. You’ve seemed to put that behind you now?

Thomas Covington:  For sure. I felt like I was getting back to myself at the third or fourth round in Italy and then Portugal I felt like I was on form too. When I re-injured my knee it kept be back a bit, I lost a little bit of my confidence in the corners with my knee. It’s taken a bit of time to get that back but I feel like we are finally back to 100% and it’s shown in the results. Hopefully I can finish off the season like this, I’d really like to get a few more GP wins before I go back home so that’s the goal right now.

Gatedrop:  The last two GP’s were fly away races in Indonesia. Obviously, the entry list isn’t as stacked because the private teams don’t go so from that side it’s not great but I thought they did a great job of the track last week except for maybe the watering.  What was your thoughts on them and are you a fan of the fly away races?

Thomas Covington:  I’ve always been a fan of the fly away races, it makes the GP’s a real-world championship and something that makes it unique. I thought they did a really good job organising everything considering the circumstances. The weather for the first round, they did what they could but the track for the second round, it was really impressive on the Friday. Everyone was really excited but it didn’t really shape up like everyone thought it would, it got really hard packed and blue groove. It was a bit over watered, I’m sure that’s pretty hard to control when you have the local guys out there watering, it seems like they could do a little bit of a better job with that. But you know, I enjoyed the Indonesian rounds, even though you don’t have a full gate you have the top guys there so it’s the same thing.

Gatedrop: Do you think you’ll miss the fly away races next year when you go back to America and also events like the Zwarte Cross?

Thomas Covington:  For sure, I think that’s what I’m going to miss most, the fly away races and unique events like this. In the US you don’t get stuff like that, all the travel and things like that. That’s kind of what I fell in love with at the GP’s to begin with so I’m definitely going to miss that.

Gatedrop:  I’ve heard rumours in the past that you’ve been homesick over here, is that true or completely false? I personally don’t really believe it…

Thomas Covington:  I mean to some extent that is kind of true. It’s always hard being away from home for so long but now I feel like Belgium is kind of a second home to me. I’ve been there for so long and I’ve got a lot of friends there, they’re pretty much like family to me now. It’s a little bit sad to leave actually, it’s going to be hard to leave my friends and stuff from here but I’m sure we’ll get in touch. A lot of people I’ve met here have already made plans to come over and watch some Supercross so that’s going to be cool.

Gatedrop:  Just on America next year, I’m sure you’ll have no problem for the nationals, you’ll probably be top five but Supercross, have you rode much SX throughout your time in America growing up or will it be relatively new to you?

Thomas Covington:  It’ll be pretty new but I actually rode quite a bit of Supercross when I was amateur. I rode the Monster Cup three years in a row in the amateur class, leading up to that every year I rode some Supercross. It won’t be completely new for me but it’ll take some time for me to learn it again. I haven’t touched a Supercross track in over 5 years so it’s going to be a learning experience the first year. I’m just going to try and stay steady, just get through the first season and learn as much as I can. I will really focus on the outdoors the first year.

Gatedrop:  For the outdoors season what will your goals be for that? Obviously, you’ve seen Zach go back and win, Dylan Ferrandis is one of the quickest guys over there now so that must give you confidence?

Thomas Covington:  Long term, the goal is always to win, it’s always the goal. It’s such a long way away at this point, I’m probably more thinking about Supercross more than anything right now. But for outdoors, yeah, I just need to be consistent top five, that’d be the goal the first year for sure. If I did that I’d be stoked, I don’t expect to go out there and just kill it for the first year. I know it’s going to be tough and the 250cc class there is on a pretty high level I think, there’s a lot of fast guys so it won’t be easy.