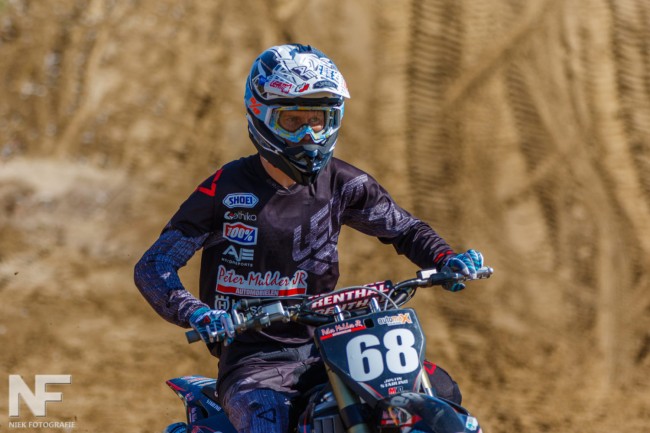 Malcolm Stewart wasn’t the only American wildcard rider at the final round of the Dutch Masters as Justin Starling also joined him at the Zwarte Cross.

Starling came in off after his strong Supercross season, the American has raced in Holland before but at Supercross not Motocross so it was all relatively new to him.

We caught up with Starling to discuss the event.

Gatedrop: Justin, we are here in Holland. What day did you fly in and did you get any riding in before the event?

Justin Starling: I got here on Wednesday, I rode Thursday at Emmen just to get the bike figured out because I didn’t bring any suspension or anything. I got one day of riding in and we kind of just went to the racing and had some fun.

Gatedrop: What’s your thoughts on Holland? You’ve been here a few times so you’re not a complete stranger but it’s still quite a bit different from America!

Justin Starling: Yeah, I’ve been here twice before but only for Supercross. This was new to me to come racing at outdoor event but I absolutely loved it. I fell in love with it, I’ve been talking to Peter about coming again to stay and race these often. To me it was better than racing in the States, it was a little bit different, the time period between moto’s was long whereas in the States it’s about 45 minutes. I thought the day program was ran very well. The track, some people say it was a little bit rough, a little bit too wet, I thought it was amazing and I had fun the whole time. I think it’s great, I wouldn’t say it’s better than the States because you can’t really compare but it’s good.

Gatedrop: Can you just talk me through both of your races?

Justin Starling: So yesterday in the qualifying race we didn’t finish so I had a bad gate pick for both moto’s. In the first moto we worked to around twentieth but on lap four I had a really big crash, I pretty much cartwheeled myself into a fence. I came from last again with my bike pretty bent up to fourteenth. I felt really good time, I was charging. I’m in pretty good shape right now so it’s no problem. Second moto, we had a little bit of a bike issue, I think there was some water on the electrical wires so it was popping. Right off the bat was kind of salvage mode just to get to the final, we had no front break either from the first crash in the first moto. We ended up thirteenth, I feel like I’m in good shape so that was good.  It was okay, I went 14-13, I don’t know what my overall is yet but for my first outdoor race in probably four years, it was okay.

Justin Starling: I’ve definitely never seen anything like this. We have a race that’s pretty big at the Nationals – RedBud and actually the Nations is there this year. It’s pretty wild and fans are crazy but this here is, I’ve gone three nights in a row just to go check it out. It was hands down the craziest festival I’ve ever seen. The people, apparently the Dutch really know how to party so it was pretty wild but for me, it was definitely right up there with the Nations with experiences.

Gatedrop: What are you up too after this event? You have any plans on visiting Amsterdam and when will you fly back home?

Justin Starling: My flight is on Wednesday, I’m going to go to Amsterdam tomorrow (Monday), I will spend a couple days there. We are working on getting to see if I can move my flight to like Sunday and hang out here a little bit more. Also, I just found out about a race in Italy this weekend. I’m going to contact Pellegrini about going to go and do that. I figured I’m here so why not keep racing and stay a little longer because I love it here.

Gatedrop: You’re a supercross guy, can you just summarize you’re Supercross season for me?

Justin Starling: Supercross was pretty good this year. I ended up twelfth again in the points which wasn’t ideal but it was pretty good. I got a career best fifth in Seattle, that was pretty cool. It was a good season and I’m happy with it. My team, AJE Motorsports Factory Husqvarna in the States did really well so it was cool to have good results with them. They were a new team as well. Super happy with it, I’m ready for next year again to come around and I think a couple days after Vegas I’ll be back in the Netherlands.