Interview: Stephen Rubini – gets that EMX250 red plate back 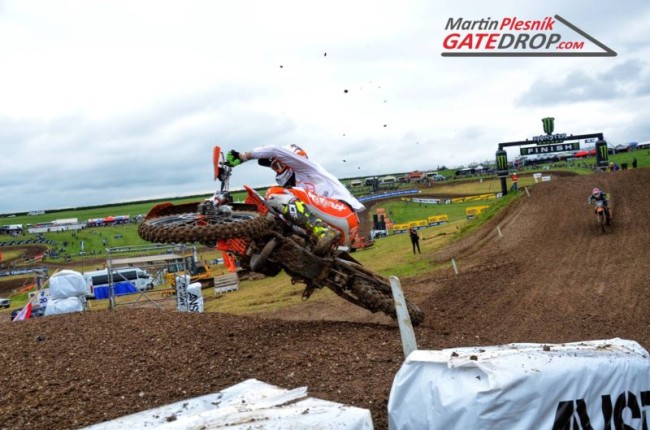 The French rider loves the technical, hard pack tracks and looked at home in Germany. You could say it was a must win race for Rubini with Lommel up next and he certainly didn’t disappoint.

We sat down with Rubini after his impressive weekend.

Gatedrop: Stephen, perfect weekend for you here in Germany going 1-1. Can you talk me through your races?

Gatedrop:  What would you say about the track preparation compared to last year? It was very different I think which meant a lot more ruts and breaking bumps compared to 2018..

Stephen Rubini: Yeah, I really like this kind of track with big ruts and big bumps. It’s not like Russia which was much faster. I really liked it and I hope for some more tracks like this.

Gatedrop: Russia and Latvia were very fast tracks, was it nice to ride a track which didn’t have such a high speed?

Stephen Rubini: Yeah, Russia and Latvia were pretty fast tracks and a little dangerous. Germany this weekend was slower and more technical. It was totally different and I really enjoyed it.

Gatedrop: In the second moto, in the last two laps you had quite a lot of pressure from Roan Van de Moosdijk, just how hard was it to forget about him behind you and focus on going forward? You did really well and I didn’t see you make any mistakes!

Stephen Rubini: (laughs) Yeah, it was pretty difficult with him behind me. At the end he was really fast so I tried to be really focused on my lines and to not make mistakes with the lappers. I did the job and took the win so it’s good.

Gatedrop: In terms of the championship how important do you think it was for you to win today? Especially with Lommel coming up, it’s not your favourite track but now you’ve something to fight for with the red plate!

Stephen Rubini: To be honest, in Latvia I was really pissed off because that was the first time for me I had the red plate but at the same time Latvia was pretty good for me. I only lost two points to Forato so now I take the lead again. We now have one month and a few weeks to train for Lommel. I will train hard to try and be on the box in Lommel.

Gatedrop: I guess you will be heading to either Belgium or the Netherlands to do a lot of sand riding then?

Stephen Rubini: We have planned some tests with the team in Italy. Of course I will go to Belgium for almost a month. I will train hard, I am not the best in the sand but I want this title and I will do everything for it.

Stephen Rubini: At the beginning it was really hard for me to go back to the EMX250 series. Actually now I am really happy about this, I’ve grown up in the head and mentally I’m much stronger now. I worked really hard this winter to be on top. Now it will be the time to talk with the teams and see what we can get. I don’t want to make any mistakes and to take the best decision to be in the best position for good results next season.