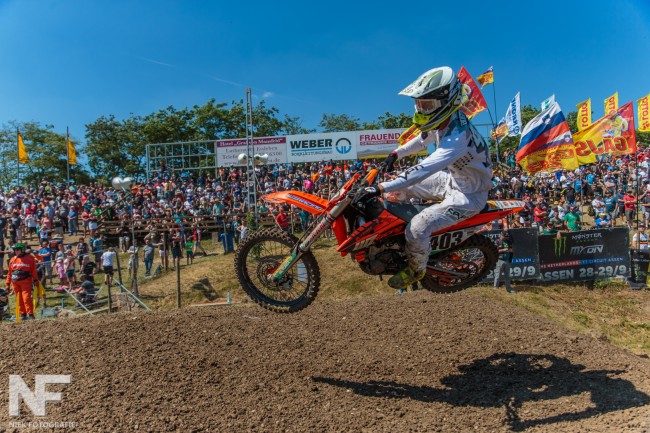 One rider that missed the start of the season was Bastian Bøgh Damm as he agreed a deal with the WZ KTM Racing team late in the off season and wanted to fully prepare before making a return to the GP paddock.

The Danish talent, has raced the last two rounds of the EMX250 championship and despite missing a lot of races has showed some impressive speed.

Bøgh Damm ended up eighth overall in Latvia and tenth overall in Germany – not bad at all considering the circumstances. With more races under his belt and bike time he should only get better.

We caught up with Bøgh Damm after the EMX250 round took place in Germany.

Gatedrop: Bastian, overall I would say it was a good weekend for you here in Germany. Can you talk me through your moto’s?

Bastian Bøgh Damm: The first moto wasn’t the best. I had an okay start in around seventh or something but then I had a crash at the second turn. It was not so good but I came back to twentieth or something and I had another small crash again. I was thirtieth or something but I fought my way back up to twelfth so it was good, the riding was good. The track was a little bit sketchy with deep ruts but it was okay.

In the second moto I had a better start, I was tenth or eleventh or something like that. I fought back up to seventh so it was a pretty good weekend for me.

Gatedrop: You passed some pretty good riders in the second moto like Josh Gilbert, how did it feel passing those guys? You looked to have had a good flow around the track..

Bastian Bøgh Damm: Yeah, I just tried to keep my head cool. I was pushing but tried to take it like a training almost. I tried to keep it cool so I didn’t feel any pressure and it worked out good. It felt good to pass those riders.

Gatedrop: You only raced the EMX250 from the last round of the championship whereas most these riders have been doing them from round one and are all up to speed. Have you found it difficult getting up to speed straight away?

Bastian Bøgh Damm: Yeah, during the off season I didn’t really know what I wanted. We were talking to some guys and I came here to WZ Racing. I came into the racing a little bit later because I wanted to get more training. Now I think I am picking up the pace quite good. The first round for me (In Latvia) was pretty good for me also.

Gatedrop: How’s everything with the WZ KTM team going and how’s the bike compare to the Kawasaki?

Bastian Bøgh Damm: It’s pretty good. I also really like the electric start as well as the stable engine. I know I can finish every moto so I only need to work on myself.

Gatedrop: Have you maybe surprised yourself a little showing the pace you have done so far in the two rounds you’ve done in EMX250?

Bastian Bøgh Damm: I am a little bit surprised but I really didn’t know what to expect this year.

Gatedrop: What are your expectations for the rest of the season?

Bastian Bøgh Damm: It would be nice to make it on the podium or even the top step. I will work as I can, we will work from here and see what happens. Every weekend is getting better and better I think.

Gatedrop: As you get more time on the KTM and more races, you should continue to improve as the season goes on..

Bastian Bøgh Damm: I think so, every week we try some new things and I keep getting to know everyone here at the team better and better. It’s more stable for me so it’s nice.

Gatedrop: Denmark have some top riders like Olsen and Haarup but when it comes to the Motocross Des Nations I’m guessing you’re hoping to at least put yourself in the selection process?

Bastian Bøgh Damm: I would love to ride the Motocross Of Nations but the Danish coach needs to pick me for the team (laughs). I need to prove that I’m worth putting forward for it.

Gatedrop: Any you any plans to do any rounds of the MX2 World Championship this year or will you just focus on the EMX250 series?

Bastian Bøgh Damm: I think I am just going to focus on the EMX250 series. Maybe next year I can do MX2, we will see what happens.