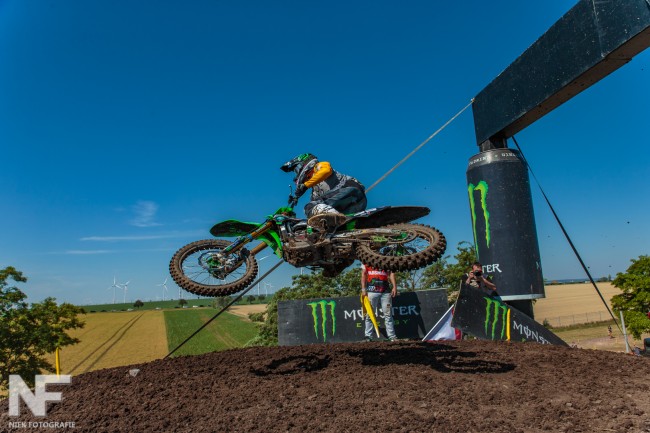 Young American rider, Mitchell Harrison had the opportunity to make the move from the American paddock to race the MX2 World Championship after BUD Racing and Brian Hsu parted ways.

Harrison, who’s now raced seven rounds of the MX2 World Championship, continues to improve with every GP and had his best round yet in Germany finishing eighth overall.

We caught up with the American to discuss the MX2 World Championship, living in France and more.

Gatedrop: Mitch, eighth overall here in Germany and your best GP to date, can you talk me through your weekend?

Mitchell Harrison: Overall, it was a really great weekend. My bike felt great all weekend as well. Qualifying, ah I’ve always had issues with it, I was like twenty-second or something but got twelfth in the qualifying race. I made progress each moto so I got two top tens and eighth overall, I felt amazing all weekend. I had the speed but just had terrible starts.

Mitchell Harrison: Well, in America there’s more lines. I would usually qualify around twelfth, that’s not good over in America on a factory bike, it’s not good. Over here, it’s the same situation, I can race but qualifying is an issue and that ended up with me having a terrible gate pick so that doesn’t help. I just think there’s something about sprinting I’m not that comfortable with until I get to the race.

Gatedrop:  It seems to be that in the race you’re able to watch the guys in front of you and follow what they do and then progress forward..

Mitchell Harrison: Yeah, I think that’s a major thing. In practice I just like to get out there and get going. Maybe if I was more patient and followed someone like Prado or Jacobi or something I could pick up on their lines and do a good lap. I get too impatient, I just want to get out there. Maybe I will do that next time.

Gatedrop:  Just on the MX2 World Championship, did you know much about the class before making the switch and is it matching your expectations? What did you expect?

Mitchell Harrison: Well, I rode three World Championships in the States – Glen Helen, Charlotte and WW Ranch.  I did get one podium but it’s different. It was different when them guys came over there because they’re our tracks and I knew them more. These tracks are weird over here, it’s hard to pass and if you get a bad start it’s almost impossible. That’s what I’ve got to learn. The tracks are really one lined sometimes unlike this weekend, there were lots this weekend so that helped. I think that’s the major thing but everybody is fast.

Gatedrop: The depth in MX2, is it maybe deeper than what you thought coming over and what people say about it in America? I know some American journo’s don’t have good things to say about it at all..

Mitchell Harrison: Ah it’s really quick (laughs), we can shut them up right now because down to twentieth they just rip. The top five are just insane but it’s different. You can’t really compare the two from US to GP’s with the soil they’re on but they’re both quick. I mean Prado would do well over there, Herlings has beat them over there. The guys are fast over here that’s for sure.

Gatedrop: A lot of Americans say they need time to adapt when they move to somewhere in Europe and race MX2. What do you think you need to adapt too the most?

Mitchell Harrison: I just need to adapt to the tracks really. I’ve never been to all these tracks so that’s my main challenge. It’s just learning it, learning the lines and the fastest lines. I think that’s it.

Gatedrop: You are based in France I believe, just how is everything for you in France and the lifestyle? It’s different to what you’re used too..

Mitchell Harrison: I actually really love it. More than were I was living, I was living in California and I don’t like California, it’s terrible. I live in Hossegor and it’s beautiful. People speak English there, there’s like a beach town. I absolutely love it and it’s actually quite easy to adapt. Especially with the BUD Racing team helping me out a tonne. They speak like three languages so honestly it’s really easy for me. I love it there in France.

Gatedrop: Have you had a go at trying to learn French?

Mitchell Harrison: Yes, I’ve been trying to learn French. It’s going to take longer than I thought though, my mind doesn’t absorb like it used too (laughs). I’m trying my hardest, I think if I’m living there then I have to learn the language. That’s what Americans expect when they come over to our country. It’s a cool language and I’m loving it.

Gatedrop: Does it helping having a fast team mate like Brian Moreau, he’s been riding these tracks for a number of years racing in EMX etc. Has he been giving you any tips?

Mitchell Harrison: No, not really but it’s good to ride with him because he can put in a really solid, fast lap so I try to learn off him. It hasn’t been working so far so maybe I need to follow him more.

Gatedrop: Just on the future, are you open to staying to compete in the MX2 World Championship for 2020 and beyond?

Mitchell Harrison: I’ve got two years left, three including this year. I would like to stay over here, I think it’s helping me tremendously as a rider. I mean if someone offered me a ride over in the States it would be cool but we will see. I would love to stay over here.

Gatedrop: I would say you’re more of a motocross rider than a supercross rider, would you agree? If so it probably makes more sense to race the MX2 World Championship with the best 250cc riders in the world.

Mitchell Harrison: You know, I’ve done better in Motocross but I love Supercross. It’s fun but I don’t know, I haven’t placed well in Supercross, let’s say. I think coming here will actually help me a lot for Supercross in the future. It depends, I like Supercross a lot but outdoors is cool.

Gatedrop: If you do stay racing in the MX2 World Championships in 2020, what will your expectations be?

Mitchell Harrison: I mean once I learn the tracks and with how my progress is going now, I think top three or top fives. It would be perfect and even some win’s would be awesome. I think I’m good enough to do that too so that would be my expectations.