Interview: Ryan Hughes on Coldenhoff, racing in MXGP and America 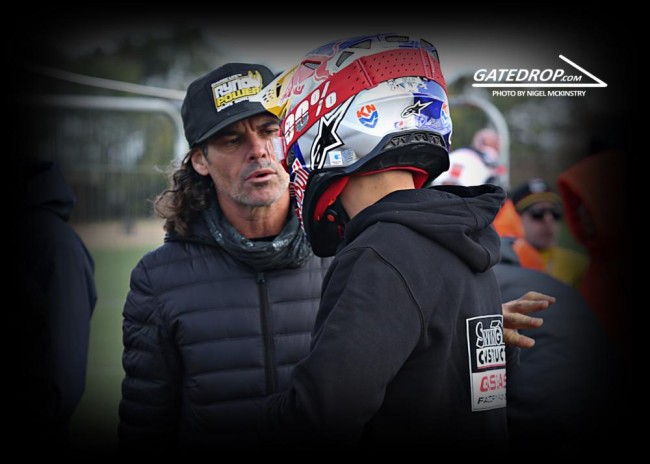 We caught up with the American after his return in the MXGP World Championship and he had some fascinating thoughts on the racing in MXGP, America and much more.

Gatedrop: You haven’t been to a World Championship for a number of years, you picked a wild one to come too with the weather but just on the racing, what was your thoughts?

Hughes:  The racing was good, the field was stacked just like your going to see in the States just like in Supercross where the field is stacked. I don’t think anybody really stands out at the moment. Maybe from today, Herlings and Gajser but Gajser didn’t have a good moto in the first one and Herlings in the second moto, he was there but didn’t run away. I don’t think anybody stands out but if you’re going to say it, it’s those two right now.

With everything else – the pits, the organisation, it is very professional. The track turned out being really good with all the different weather conditions we had and with the rain. It was good, with Glenn (Coldenhoff), who I’m working with, we had a good solid weekend with a 6-6. There’s a couple of little things we need to work on. This is the first time I’ve actually seen him race so to speak apart from the TV and I’m getting to know him. We will fine tune things a bit more and be more of a team here shortly just because I’ll have had more experience with him. It’ll be easier that way but the first race is good, you can’t win the championship in the first race but you can lose it. Today, we were consistent and he was the fastest guy at the end of the second moto, the fittest guy so that tells you something and now we just have to fine tune it.

Gatedrop: How did the opportunity come about to work with Glenn and what’s he like to work with? A nice guy and a hard worker I can imagine..

Hughes: The platform called Instagram linked us together (laughs). I do a lot of stuff on Instagram teaching and coaching and he sent a message to me thanking me for the information I give out to the people. I said well hey, if you ever need any help just let me know and he messaged me back right away asking if I’d come to Spain to work with him for a week which is what I done. Two days later we agreed to do the GP’s, we got along really well and connected well quickly. He’s a really quick learner and isn’t afraid of change, he’s a super super super good guy. It’s easy and a blessing for me, it makes my job easy (laughs).

Gatedrop: When he asked you to work full time in MXGP with him was that a tough decision or right away did you just decide to go for it?

Hughes: I just said let’s do it. I’m free in my life so I can do whatever I want, I just had to go through some obligations I had at home from schools and coaching. Other than that I just said let’s do something different. I’ve been the educator for so many years now – educating, educating and educating so it’s kind of cool to come to somebody I can just fine tune.

Hughes: I live in Holland right now close to Glenn so that works out well. That’s where I need to be, close to him so we can work together. It’s good. It’s good to be back in Europe, I like the diversity of it. Each country I go to there’s different food, different languages, different architectural looks and the next country I go to it all changes. I like that in my life, I like things that are different and unique. Uniqueness is beauty to me so that’s why I continue to travel round and continue to do things and make myself as free as possible so those opportunities can come about and I don’t have to turn them down due to other things.

Gatedrop: Just on racing, in America the tracks are all pretty similar terrain whereas in MXGP, there’s a lot of diversity in the tracks. Do you think that’s what is helping these guys be better than the Americans when it comes to Motocross?

Hughes: Yeah, I think so, that’s one aspect of it. I wouldn’t say they’re better than the Americans, it’s just the conditions they’ve been riding at the Nations that we’ve had favors them. I think the biggest thing is that after the American’s last National, it’s a month until the Nations and that alone, you take a race course and put it in a stable, when you take it out it’s going to be a click behind. A click behind is a second, yeah it’s not much but one second every lap can become quite a bit. That is what I think we are facing a little bit and the mindset is already on Supercross. You can’t say that Gajser, Herlings or Glenn is faster than Eli but you can’t say Eli is faster than them.

Gatedrop: Well, would you like Eli to come and race the MXGP World Championship then so then we would see..

Hughes: Yeah, I mean I think Eli would be the best guy to do it. He’d be the best guy to do it for sure. I think the tracks in America, if you look at the Supercross tracks, they’re all the same, all the National tracks are the same. They’ve all got the same sh*t, same, same, same, they only allow you to develop one way or a certain amount. Here is different, you have a bunch of diversity. It’s the thing that we deal with in Southern California. The tracks are so easy that we aren’t developing any fast riders anymore. If you aren’t challenged when you are practicing or when you are racing then you won’t progress yourself. Back in my day, we didn’t have practice tracks, we had tracks in the hills and they were the sh*tist things ever so you learned good technique and how to relax even if you were out of control. That is what you are seeing here a little bit, if we had a GP at a 100 degrees or whatever then I think you’d see the Amercan’s come out on top.

There’s been this comparison since the 80’s and the 90’s who’s better, who cares? We all ride motorcycles man. How about which person is better, not nationally because you’re judging people by lines on the map. I’ve flown over the world many times and I’ve never seen any lines over the earth, you know what I mean? It’s kind of stupid that people are like oh American’s and European’s! No, they’re called human beings that ride a motorcycle so let’s say which name is the fastest not which side of the water. But that’s how people work and I am happy just to be in a different place, seeing racing in a different view.

Gatedrop: What was your thoughts on the track today? Honestly I thought it was one of the best Matterley Basin’s I’ve seen, it was very technical out there..

Hughes: The track was technical, it was slower because it was super technical. I walked the track a little bit and the ruts were really deep. Is it any different to a National? No, probably not. It’s just this track worked out really well for the weather that we had. The track workers did a really good job, they were smart not to disc it up. We couldn’t have asked for a better track on race day for sure.

Gatedrop: It was announced that you’d be working with Glenn for four months in MXGP. Is the ideal you’ll head home and then back to MXGP for the rest of the season or is it still to be decided?

Hughes: I mean we will see. Right now it’s one step at a time, I don’t like to get to far out into the future and put pressure or expectation on anybody. We will decide what’s going to go on in the future in probably another month or so. Right now let’s just get our feet wet and let’s get going with some GP’s first.

Gatedrop: I noticed Stuart Edmonds commented on one of your Instagram posts about a training school in Ireland, is that something that is likely to happen? Also I saw you were in Dublin a few weeks ago, where you actually in Dublin or was it for a connecting flight?

Hughes: I just made a stop through. I would love too, I just need someone to help me out a little bit with that. It’s hard for me to organise it, I don’t know the riders or that stuff. If I can get someone to help me organise it then I’d do a school, I’d do a school in the bathroom if I had too (laughs). If there’s someone wanting to learn, people wanting to be better on a motorcycle then I’ll be there. I like to go to different countries to do stuff because that’s my interest, to teach in as many countries as I can before I say I’m done. You’ll see me there this year probably, it’s much easier because I’m much closer being in Holland.