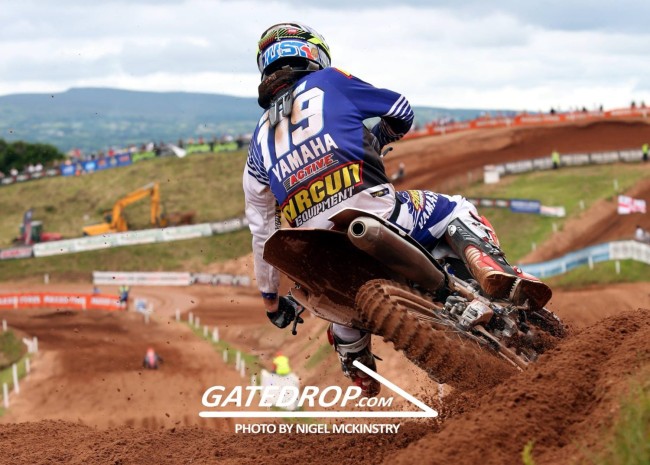 One of the British riders competing in the MXGP World Championship this season is Ryan Houghton who signed with the I-Fly JK Yamaha outfit. Houghton is also focusing on the Maxxis British Championship as well as the world series.

In the MXGP World Championship, Houghton is still searching for his first championship point but they aren’t easy to come by racing against the best riders in the world. Houghton has showed signs of improvement throughout the course of the season.

We decided to catch up with Ryan to talk about the season so far.

Gatedrop: Ryan, you got on the box at Blaxhall, you must be pleased! Can you talk me through your day?

Ryan Houghton: Yes, I was very pleased, third in qualifying set the tone for a good day. I felt strong and really comfortable all day. My starts were not the best but I made some quick passes on the first few laps of both moto’s which put me in a good place.

Gatedrop: You’ve been competing in the MXGP World Championship too, how has that season going for you?

Ryan Houghton: It’s certainly a massive learning curve that’s for sure. The first couple of rounds I done I just felt myself riding instead of racing. But I quickly learnt that you cant hold back at all or you are gonna get swallowed up fast. So I’ve been working on my intensity a lot.

Gatedrop: Just to go back to the start of the season, you signed a deal with the I-fly JK Yamaha deal. How did the deal all come around?

Ryan Houghton: We got talking at the end of last year and one thing led to another.

Gatedrop: You didn’t really focus on a full championship in 2016. Where you surprised to get a deal to race MXGP?

Gatedrop: It’s an Italian team, how is it working with them? Is the language a problem?

Ryan Houghton: No, they all speak really good English. It is probably better than me.

Gatedrop: Have you been helping with developing the bike? You have a bit of experience of testing bikes etc. How’s the bike now compared to the start of the year?

Ryan Houghton: I raced a yam for two seasons in 2014 and 2015 so I already had a good idea what I wanted from the bike. We had the bike working well at the beginning of the year. But we have kept on developing it throughout this season and I’m really comfortable on it at the moment.

Gatedrop: What’s the level like in MXGP this year?

Gatedrop: Are you enjoying the British series? Are you behind the change of format to two moto’s instead of three?

Gatedrop: What’s your goals for the rest of the season?

Ryan Houghton: If I could break into that top 20 at the GP’s I would be happy. Also, carry on performing well at the last two British rounds.

Gatedrop: It’s still early but have you any plans for 2018 yet?

Ryan Houghton: I have nothing sorted yet…

Ryan Houghton: Yes. My Mum and Dad, Girlfriend, mechanic who all put a lot of effort into me and my racing. Clinton Putnam and Dickie Dye for believing in me.