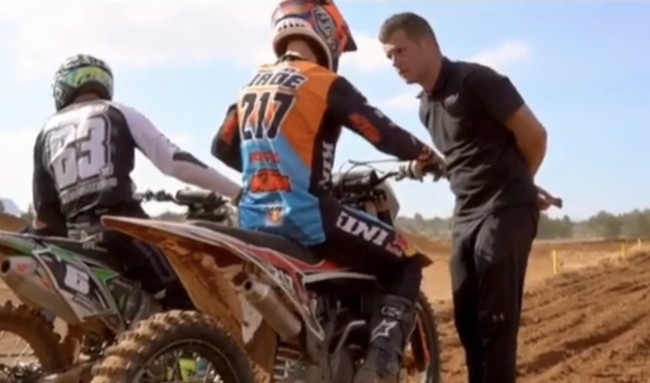 Richard Mike Jones is one of the leading riding coaches in the UK and has been running a successful training academy for a number of years as he bids to help young riders achieve their potential.

A former British championship rider himself, he has the experience on both sides of the fence, so we asked him about his goals for the academy, the riders he is working with as well as what he feel the likes of Cairoli, Prado and Herlings do differently to make them the best of the best.

Can you tell me a bit about your training school and what you’re trying to achieve..

Ever since I started the RMJ Academy my goal has remained the same, and thats to raise the standard of coaching Moto X in the UK. Every year we’re trying to raise the standard of what we offer and having 2 full time coaches, our own S and C coach, a great partnership with Harris and Ross who the care of our Pro Academy riders we feel we’re getting to a point where we can help riders achieve their goal, what ever they might be.

You’re coming over to Ireland the week before the British Youth Championship at Desertmartin, can you tell me a bit about that and what you have planned?

For years i’ve wanted to coach in Ireland, and now Ashley (Wilde) has retired from racing and is coaching full time it seems like a good time to get over there. We’re going to do a 3 day Boot Camp on the Tuesday, Wednesday and Thursday before the British Youth Championships where we will cover everything from Starts, technique, lines, speed and motos.

Can you tell me about some of the riders your working in 2019?

So we have a big group of riders this year between the Pro and the Rookie Academy, in the 85cc class we have Finley Evans leading the SW class, Charlie Heyman, Sam Atkinson and Bailey Johnston locking out the top 3 of the BW class, Reece Jones and Brandon Buckley first and second in the 65cc and Drew Anderson in third place in the Open class… To speak about riders individually would take all day, that said we’re super lucky as we have a great group of riders who all get on and give 100%, i’m a firm believer that the riders training together really pushes them to keep improving at the same time as getting them used to battling and pressure ready for race day. We also have some amazing up and coming talent which is great for next year too!

Eddie Jay Wade is one of Britain’s next best hope’s, do you think he has what it takes to become a world class rider in future?

I think he’s already a World Class rider! We have worked with Eddie and his family since he was 9 years old and their commitment to amazing. Eddie won the 85cc World Championship 2 years ago, in his first EMX 125 race got a 7th despite breaking his collar bone only 4 weeks earlier and a 3rd in his second round on the 125.   This year has been tough, after breaking his femur at the end of last year he didn’t get back on the bike and pushing until January, but bit by bit he’s starting to get back to 100% and has been in the top 3 at the last 2 EMX 125 race and won the last 2 Spanish Championship rounds.

Adam Sterry in terms of speed is having a good season. Do you see the progress he’s made over winter and working with Marc de Reuver?

I think Adams speed has always been his strength. In his first ever GP as a wild card he ran inside the top 6 and came home 8th overall. Adam has had some terrible luck, in his first full year he broke his wrist in the first GP of the year without even crashing, he still went on to nearly win win his first GP race in Assen with a 10 second lead after 15 minutes before a freak crash cost him.

In his second year he snapped his ACL putting him out for 6 months, again without crashing, and last year on his come back in Hawkstone he got 3rd after 10 months without racing then the week before the first GP sliced his tendons in half in his finger, again, without even crashing, quite crazy really… This year he is working with his team trainer and I know one of their goals is to be consistent which he is achieving so thats really good to see!

Is it your goal to train with a GP rider again and try to take them to the next level?

Yes, it’s absolutely my goal, however its now about the RMJ Academy, not just me, Ash has become an amazing coach and between us and the people around us we have a lot to offer riders. I am still Adam’s manager so depending on which team he is with and if they have a trainer he may return, as well as the fact we have some amazing talents up and coming who we have worked with a long long time and want to help take them all the way.

Prado, Cairoli and Herlings. When watching them ride what do you see them do that makes them so good?

Firstly I want to say their mentality, something most look past. In terms of riding the bike though, they’re all very accurate, carry great speed, smooth on the power and all use their legs a lot! Their body position means they’re using their legs and not hanging off the bike or crouching, this means that they are strong on the bike, save energy and safer with more control.