Interview: Josh Gilbert on EMX250 and his season 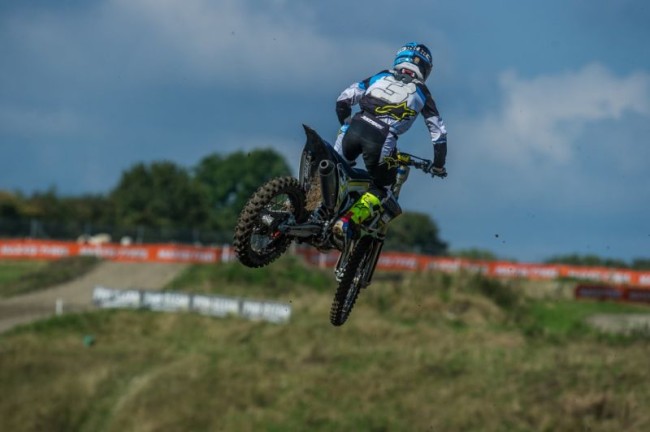 One rider that’s having a very consistent season is British talent, Josh Gilbert. The Buildbase Honda rider is quietly going under the radar but is showing some good things this year.

In the EMX250 championship, Gilbert sits a strong seventh in a very competitive championship but is doing even better in the British Championship as he’s second and only one point off the red plate.

After a hard day at a technical track of Teutschenthal in Germany we caught up with Gilbert to discuss his season so far.

Gatedrop: Josh, I would say it was a very solid weekend for you here in Germany but maybe you wanted more. Can you talk me through your moto’s?

Josh Gilbert: Yeah, I mean qualifying has been going really well, I was fourth in my group and I felt pretty good actually. My speed is there, the last few weeks it has been. In Latvia I was second in my group, this weekend fourth in my group. In the first moto I was seventh out of the gate I think, I ended up sixth which was strong. If you look at my lap times, there were always within a couple of seconds each lap, I was happy with that race.

Today, the track was a little bit flatter and quite a bit faster but the ruts and stuff were quite good for the second moto. I think because it was faster and not as technical, that maybe didn’t go in my favour a little bit. I didn’t get the best of jump out of the start actually but then kept it tight around the first turn to come out about seventh or eighth I think. I actually felt pretty good to start with, I made a few passes and got up to sixth.  I stayed there for quite a while but the last five or ten minutes, I’m not used to the intensity, I mean I am getting more and more used to it but it’s frustrating because just at the end I faded a little bit and let the others get to me. I lost four positions in the last four laps so I’m annoyed at that but I do think there’s a lot of positives to take out of today.

Gatedrop: You mentioned the track was flatter and faster for the second moto. That seems to be the trend this year as Russia and Latvia was the same. Would you rather the track crew left the tracks overnight so they would get even rougher?

Josh Gilbert: Yeah, I mean in Latvia, the Saturday for us was rough. I watched MX2 and MXGP and it was quite good too. Then on Sunday they obviously graded it and our race is always closer and faster on Sunday because our race is out early. I don’t know, it’s a tricky one really. But going off from what I’ve heard from MXGP and MX2 in Latvia, they said they graded it between their moto’s, I mean when have you ever had that before?  I don’t think they’ll grade it at all today (In Germany) and I think it will turn out good because they’ll leave it and the only reason ours was a bit faster was because we were out first again today. I think that this weekend they’ve done quite good with the track prep compared to Russia which wasn’t very good.

Gatedrop: Obviously, there’s a new u23 age rule in the EMX250 series class this year, what do you think that’s done for the class? Is it similar to last year, less or more competitive?

Josh Gilbert: If I’m honest, I think it’s stronger. Last year I was battling with Mel (Pocock) in Britain and then he’d go to Europe and be at the front of that. Mel’s a good rider and I’m not saying he wouldn’t be at the front but going from what my speed is at the minute to what it was last year, I think I’ve got a little bit better over the winter. Maybe not massively but just a little bit and I’m still battling for sixth and places like that. The top three, I mean they’ve already proved it. Van de Moosdijk has had a fifth in MX2, Forato has had a seventh overall so those boys are on rails.

Gatedrop: You’re racing the British Championship too which is pretty much all sand races. How tough is it racing sand at the British and then coming to EMX250 and riding proper hard pack tracks?

Josh Gilbert: Down in Cornwall it’s all hard pack really. It actually took me a lot to get used to the sand growing up. I’d say I’m better on hard pack but the amount of British tracks now which are sandy on top and hard underneath so I don’t know. I’ve had to get used to both so it doesn’t really affect me too much.

I mean I need to get ready for Lommel, that will be a tough one because that is deep sand. The British this year is much better, it’s a deeper field with the top five or six but doing these European races are definitely helping me because of the intensity. I need that at the British with the GP boys as they’re used to thirty minutes plus two rather than the twenty-five plus two. It is helping me but it’s a bit of a slow process at the minute.

Gatedrop: Just on the British, you’ve got guys like Vaessen, Ostlund and Walsh to name a few. What’s it like racing them and are you happy with how it’s going? You’ve been very consistent.

Josh Gilbert: Yeah, I mean I am one point off the championship lead so it’s very close. I’ve been pretty consistent but I’m kicking myself a little about FatCat because I didn’t do too well there. As for the rest, I think I’ve been on the podium every time. We are only half way through so we just have to keep our head down and hopefully come away with the championship at the end of the year.

Gatedrop: Just on the future, I’m not sure how many years you’d have left in the MX2 World Championship if you were to move up now – is that something you’d like to jump up too in 2020?

Josh Gilbert: I’m 21 but I’m 22 at the end of this year so really I’ve only got one more year which is really annoying. If I was two months younger I would have had two years but it is what it is. The goal is to race the World Championship, if you ask any rider they will say the same, it’s the pinnacle of the sport. It would be nice to get to that level but at the end of the day, it is a job as well so you can’t keep spending the money just to get there. We haven’t got loads of money (laughs).

I mean I’d like to stay where I am with Buildbase Honda because I am really happy with the team. Dave (Thorpe) isn’t overally keen on the MX2 World Championship. The ideal situation for me would be for him to say, that’s it we will do MX2 next year and I would be made up but we will see.

Gatedrop: You’ve got a difficult decision to make because if you were to leave the great team you have,  you’d only have one year in MX2 before having to leave and then maybe you wouldn’t be able to get such a good ride in Britain again!

Josh Gilbert: Yeah, I mean it’s starting to come around for deals time so I need to kind of  start to really think about what I really want to do. Hopefully we can figure something out with Dave and the team because for me they are the best in the country. We will see what happens (laughs).