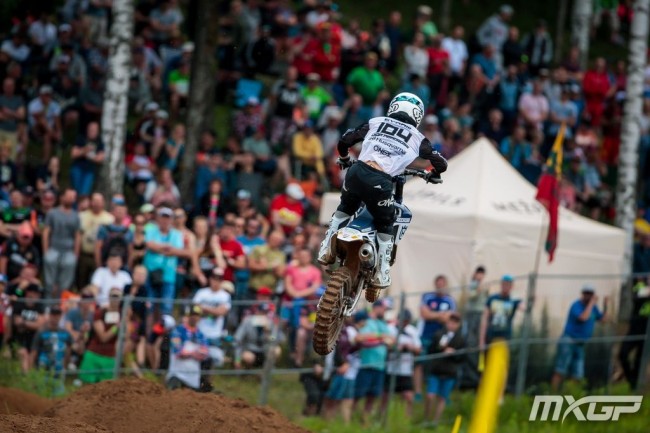 Young German rider, Jeremy Sydow picked up an injury at the first round of the EMX250 championship but recently made a return to racing. The DIGA-Procross Husqvarna rider has been so good you wouldn’t think he’s had any time off the bike at all.

In Latvia, Sydow had a great weekend and if it wasn’t for a crash at the end of the second moto it would have been a 2-2 finish but to end up third overall and to get his first podium in the competitive EMX250 class was a great weekend for him.

We caught up with Sydow to discuss the podium and his season so far.

Gatedrop: Jeremy, you’ve just made a return to racing but already shown some very good speed. Have you surprised yourself a little?

Jeremy Sydow: Yes, I definitely didn’t expect that. I was 2 months off the bike because of the scaphoid injury. Before Möggers I just rode 5 times.

Gatedrop: In Latvia you got on the box with a third overall. Can you talk me through your races?

Jeremy Sydow: In the first race I took the holeshot. Roan passed me after some corners and I was the whole race on 2nd place. I just found a good rhythm and rode a pretty good speed. In Race 2 I had another good start and I was quickly into 2nd again. Rode the whole time without any mistakes and that 2nd place was normally safe. Unfortunately I had a big crash in the difficult wave section with 3 laps to go. I was lucky to finish still in 5th position because I saw stars after the crash.

Gatedrop: Just how did it feel standing on the podium for the first time at that level?

Jeremy Sydow: Actually, at first I was pretty sad because I threw that 2nd place away. But when I was standing up there I was really happy and proud of myself. It was just ab amazing feeling and finally all the hard work payed off.

Gatedrop: What would you put your good return to racing down too?

Jeremy Sydow: I never stopped training my body due to the injury. I also didn’t expect anything from the races because I had no idea where I’m standing. I just feel super good now on the bike and just enjoy riding right now. I also worked with my new riding coach Joel Roleants on my riding style.

Gatedrop: Just going back to the first round when you picked up the injury, just how tough was that to take at the time?

Jeremy Sydow: It was really hard for me! I worked really hard the whole winter and I was riding pretty good until the crash. The first two weeks were really sh*t for me. I wasn’t really motivated to come back but when I got some good news from the doctor my mood was getting better and better.

Gatedrop: It’s your home GP this weekend, just how much are you looking forward to that and what’s your expectations for Teutschenthal?

Jeremy Sydow: I’m already looking forward to this the whole year. I love to race in Teutschenthal because it’s not far away from my home and many fans are coming. My goal is to put my bike again on the podium. That would be super cool in front of the home crowd. Top 5 would be also okay for me but a podium would be really special.

Jeremy Sydow: I just want to improve my riding from weekend to weekend. I want consistent races and score as many points as possible. In the ADAC championship I have still a chance for the title so I go for that.

Gatedrop: Do you have any plans to race any rounds of the MX2 World Championships that don’t collide with EMX250?

Jeremy Sydow: Yes, my first GP will be in Loket. We plan also to do 1 or 2 more but we will see how it goes.

Gatedrop: You joined the DIGA-Procross Husqvarna team for this season, how’s everything going with the team?

Jeremy Sydow: Until now everything is going really well. I really love the bike and the familiar atmosphere in the team. They give always 100% for me and I really appreciate this.

Gatedrop: Have you thought about 2020 yet – have you a preference between racing EMX250 again or the MX2 World Championship?

Jeremy Sydow: My plan is to move up to MX2 next year. It’s the right time to make this step I would say.

Jeremy Sydow: Yes, I want to thank the whole Team DIGA Procross Husqvarna, my trainer Joel Roleants, every sponsor that supports me, my family and also my girlfriend. Wouldn’t be able to do that without them!