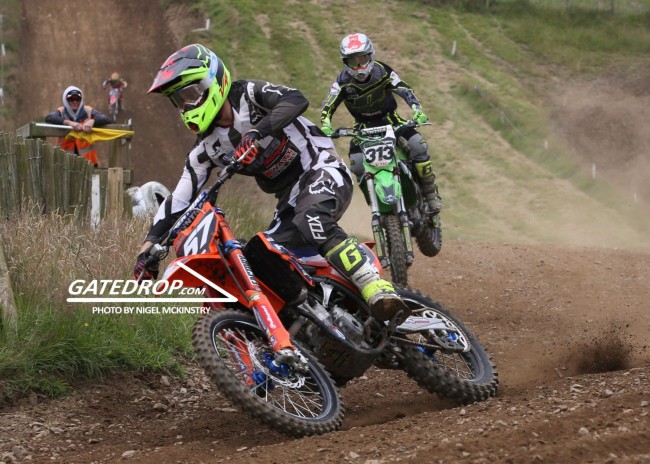 Richard Bird has been in the Irish motocross scene for long time now and has always been at the front in some competitive classes. It’s clear to see he has worked hard to get the most out of his career.

Bird already has five Ulster and one Irish title to his name. He has been in good form this year and looks like he will add another Ulster title to his collection.

As well as all his titles he also represented Ireland at the Motocross Des Nations which he will look back on with fund memories, not much can top riding for your country at the biggest race of the year!

After round four of the Ulster Championship we caught up with Richard to discuss his season so far.

Gatedrop: Dicky, it was almost the perfect day for you winning six out of six but a crash in the last one ruined that, can you summarise your day for me?

Richard Bird:  Yeah, it was a good day for me so it was.  It’s the first time racing the MX2 bike this year so it is, it was good to win all three races. It’s just a pity in the last MX1 race there I had a wee slip and went down so I did.  But, overall it was a good day.

Gatedrop:  How did you find racing the 250cc and the 450cc on the same day? You didn’t have much time between moto’s to adjust!

Richard Bird: Yeah, it’s tough going so it is. It’s alright when the races keep going but with lunch break and stuff like that you start to seize up a wee bit. It’s hard to get food and stuff in the body but I really enjoyed it so I did.

Gatedrop:  I was hoping you’d ride the more competitive MX2 class earlier in the year but you didn’t, what made you decide to race it today?

Richard Bird: Davy Dickson said to me about a couple of months ago about riding it and then I hurt my ankle so I didn’t get a chance too. Today, he said about riding it again and I said I would to go out and try it. I’m glad I did because I definitely enjoy riding the MX2 class, probably better than in MX1! It was fun.

Gatedrop:  You mentioned you hurt your ankle, just how much was it holding you back and is it 100% now?

Richard Bird: It’s still niggling a wee bit now. I done it at Athlone where I tore a ligament, it’s not too bad riding the bike. Fitness wise, it’s hard to train and stuff so it is. We’re getting there now with it as I’m back in the gym and stuff so we will just roll onto the rest of the year.

Gatedrop: The Ulster Championship is going great for you and it looks like you’ll clinch the title. In the Irish Championship you’re up against Stuart Edmonds, are you enjoying that challenge?

Richard Bird: It’s never over until it’s over, there’s still two rounds left and you never know what can happen but we are looking pretty good in the Ulster so we are. In the Irish, having Stu there it’s definitely fun, he’s doing well in the British Championship so it allows me to push in the races to try and stick with him.

Gatedrop: You haven’t competed in any British Championship races this year, seeing Edmonds doing so well have you thought about doing any? You could push for top ten results!

Richard Bird:  I did think about doing Desertmartin but I hurt my ankle just two weeks before it so whenever that happened I couldn’t do it. You definitely can’t compete at a British Championship when you aren’t at 100%.  I won’t be across the water racing, I’m a dad now so I just don’t have the time now to be running about doing what I want.

Gatedrop: Yeah, you’re a father now. How is everything going off the track and is it hard to find the balance between being a dad and racing life too?

Richard Bird: No, lucky enough, Sorcha is pretty laid back so she is (laughs). She doesn’t mind me going out training and putting the bike time in, she knows how much I enjoy it. It definitely does change your life though, you start to look at things differently. But it’s all going good so far.

Gatedrop:  Do you still have the same motivation you had 5-6 years ago? You are a hard worker and that’s helped get you were you are!

Richard Bird: Yeah, definitely. Everyone knows that I love training in the gym and I’m always there training. However, now I have bills, I have a job as I’m self-employed running my own business sort of thing so you do look at it differently. I’m getting older so I am, I’m not a young boy anymore but I defiantly do still enjoy training and putting in the work.

Gatedrop: As you said you’re not getting any younger, but do you reckon you still have a few years racing left in you yet?