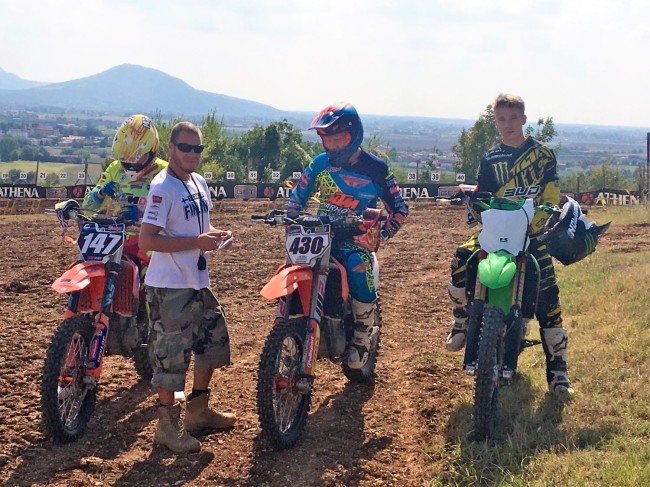 It’s not every day that an ex GP rider gets in touch with you to say you’re doing a great job promoting the sport but Jussi Vehvilainen dropped us a message a few months ago to say what a great job we are doing! It was pleasing to hear such positive feedback from an ex top GP rider.

Despite his retirement from racing Jussi is still very enthusiastic for the sport he clearly loves which is great to see. He is very busy running training schools and is also team Finland’s team manager for the Motocross Des Nations event.

We caught up with Jussi to discuss a range of topics including his life after motocross, what he’s up too now and the current level of MXGP.

Gatedrop: Jussi, how many years has it been since you rode at a professional level and what are you up to these days?

Jussi Vehvilainen: Well, it has been long time after my last race, even though it feels like yesterday! My last race was back in 2007 in Italy, the last round of MX3 World Championship. I secured the 3rd overall in the Championship that day and since that I haven’t been behind the gate as a rider.

I was supposed to race the MX3 Championship again in 2008, but after two shoulder operations during the winter I just withdraw of the series. Since 2008 I have been busy with my mx-schools and training. Also, I have been doing some things in the US during the winter periods and now I’m the co-owner of a company called Race SoCal as we do mx vacation and training trips to Southern California. During the summer, I’m busy with my schools. It depends on the year a bit, sometimes I have more guys I train, some years less, but the schools are the most important part.

Gatedrop: The sport is pretty different now to when it was when you were riding, what would you say the biggest changes are?

Jussi Vehvilainen: Sure, the sport has changed and mostly for the better. The internet and social media gives us so much good coverage of the sport these days, I love it as a fan! For the top riders and fans the sport is really cool at the moment I think altogether.

The only down sides I can think are, on money side, maybe it’s tougher for the riders who are not in the good or the factory teams? Other than that, I would like more the old school tracks. Some of the tracks might have the same name as before, but their personalities are mostly gone. I mean, back in my days, we had races on rock hard, sand, in the trees, with only some jumps, with many jumps, etc… Every track was just a different animal!

Gatedrop: Youthstream have made lots of changes, what are your thoughts on the job they are doing and would you do anything different?

Jussi Vehvilainen: Like I said, I love the media coverage of the series. I don’t know if it’s just the standard of any sports these days? But its great! Everything looks more organised and professional when you arrive at the event for sure.

About the age rule in MX2, I’m not sure… My feeling is, sure it makes the guys move up to MXGP and does make that class great. But at the same time, it makes MX2 bit less interesting at least for me because no big names are in it. But, the guys are fast in MX2 for sure too, as the top guys are doing really good in MXGP immediately when they do move up. But in another way, maybe we just need to have one main class? I really like to follow road racing, but as I’m busy and not the most hardcore fan, I only watch the MotoGP. Right now I have no Idea what’s going on in other classes.

Gatedrop: You must be watching the MXGP series this year? It’s been great some racing with Herlings, Cairoli, Gajser etc and the young guns in MX2!

Jussi Vehvilainen: Yep, MXGP has been awesome! Tight and hard racing, many different winners and top of that, as myself and my kids we are big Cairoli fan, it’s great to see him doing great! About MX2, it has been good racing too, but somehow before the race I always have the feeling that the Jonass kid is going to have it.

Gatedrop: What do you think of the current level in MXGP?

Jussi Vehvilainen: Sure, it’s on a high level, even some of the top guys are struggling to get top-10 after a bad start or luck. If all the riders are healthy and you do count all the factory, or factory supported riders in that class, you have like 20 of them!

Gatedrop: What’s motocross like in Finland at the moment? Is it in a healthy state, things could be better in Ireland!

Jussi Vehvilainen: It’s a bit the same over here. As a country, we are not doing that great with the economy side, many families are in trouble with the money. Our sport is expensive, so it’s not really a great combination to get more kids into the sport or to get our young riders to try and go for international racing.

Gatedrop: I believe this will be your tenth year being Finland MXDN team manager, are you looking forward to the event this year?

Jussi Vehvilainen: As a rider, I was part of the team nine times and we scored two bronze medals back in 2002 and 2003. Since my retirement of racing, I have been the team manager, and yes, I really like that event, great memories!

The last couple of years has been difficult, we have been fighting with the Irish team to be in A-final, and last two years we have lost! At the moment, it looks like it’s not going to be any easier as our number one guy, Miro Sihvonen is out because his injuries. We are going to fight hard to be in that A-final. Sure, I wish team Ireland is in it too, so we need to drop some other team out.

Gatedrop: Are there any young guns in Finland that you are keeping an eye on who could make it big in the future?

Jussi Vehvilainen: Most of guys you know are already doing the EMX series, some are doing good and some are still learning. Those riders are our biggest hopes for the next few years. After those guys, there are some young kids, 65 and 85cc riders who are pretty good. Now I just hope those few kids can stay injury free, develop their skills and come up the international ranks.