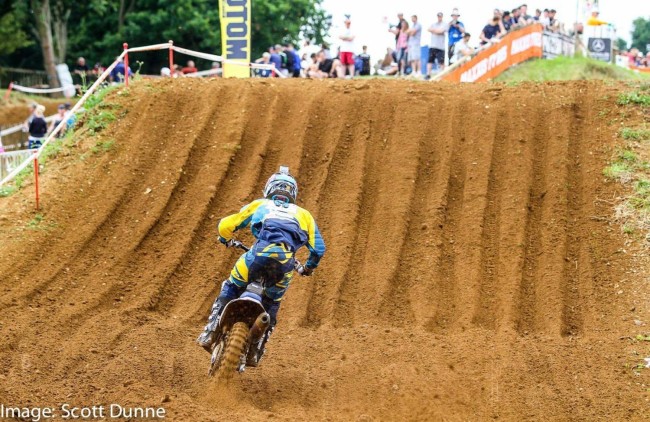 One rider in the British scene that has improved a lot during the 2017 season is Dan Thornhill. He is one of the younger riders in the class after making the decision to move up from the MX2 class when he was relatively young.

The Cab Screens Husqvarna rider is having a solid season as he sits an impressive tenth in the series. At the last round at Blaxhall he had his best round yet with a strong fifth overall which is his best round yet in the MX1 class.

Thornhill will be hoping to break into the top five during the last two rounds of the series too. We decided to catch up with him to talk about the season so far.

Gatedrop: Dan, you had a good round of the British Championship at Blaxhall. Can you talk me through your weekend?

Dan Thornhill: Yes, Blaxhall was a solid round for me. I’ve been working hard on and off the bike like always but just lately I’ve been looking deeper into everything to get the best out of myself. The weekend started good for me with a decent qualifying. All the guys between 4th and 11th were on the same second which just goes to show how fine it is getting between riders. I took a reasonable start in the first moto and worked my way up into 5th by half way and by the end I had pulled up to 2 seconds behind Rob Davidson in 4th.

I struggled a little in moto 2 from the word go to get a good flow but pushed along to bring home 8th and my best overall of my career to date with a 5th overall!

Gatedrop: You’re still one of the younger guys in the MX1 class, why did you decide to move up to the MX1 class so early?

Dan Thornhill: A few things happened for me back at the end of 2014 when I had just completed my first full year in MX2.  Unfortunately, I fell short of a ride/support with bikes for the following year. I had a second hand 450 Honda that at the time I was riding in the Beach Races and at that point I thought my racing was taking a step back. That was when CabScreens had set up a team and it all just fell where they were looking for a 450 rider and I was looking for some support with bikes and I’ve not looked back since!

Gatedrop: The format of the British Championship has changed from three to two moto’s for this year, what’s your thoughts on that?

Dan Thornhill: I like the two race format, mainly because the races are longer. I feel I am physically in a good place and on some of the demanding tracks the longer races sort the men from the boys. With the intensity at the start of the races and the longer duration it makes racing better for the spectators and shows the effort that each rider puts in away from the races!

Gatedrop: Your also competing in the MX Nationals, how are those going for you?

Dan Thornhill: The MX Nationals are going quite well for me this year. The group is stacked with top MX1 and MX2 riders which makes the racing really interesting. I’m currently sat 5th in the Championship and I am looking forward to taking some confidence from Blaxhall into this weekends Mx Nationals at Canada Heights!

Gatedrop: I believe you’re a self employed electrician, can you tell me a bit more about that?

Dan Thornhill: Yes that’s right, basically before Cab Screens gave me the great opportunity of trying to fulfill my racing career and take a step away from full time work I was just qualified as an electrician. I enjoy the trade and became self employed so that when I need to I can jump on the tools and it also helps pay the bills!

Gatedrop: Is it hard to balance working life and motocross racing in terms of fitting in training and riding during the week etc?

Dan Thornhill: At first I found it a little difficult but over time I have learnt how to prioritise and obviously not everyone gets an opportunity to try and fulfill their dream. I focus as much as I can on riding and training physically and as I said sometimes when things are tough or I have free time I will always do the odd days here or there to help keep me and my racing on the straight and narrow!

Gatedrop: You’ve been with the Cab Screens Husqvarna team for a number of years now. You must be really comfortable there and is there a good environment in the team?

Dan Thornhill: I have been with Cab Screens since 2015 and I can honestly say I wouldn’t be sat on a British Championship start line without them. My family and I have been very close throughout the years of my racing and the team is exactly that just on a slightly larger scale. Each person involved wants the best for each other and it’s like one big family under the awning.

Gatedrop: What are your goals for the rest of the season and also your long term goal?

Dan Thornhill: My goals for the rest of the season are to maintain my progress each week as I’m getting stronger in the areas I’ve previously been weak in and I’m looking to take that into the off season and build for next year! My long term goal as a kid was to race British Championships and I thought that was a dream but I’m here so I just keep setting target goals and when or if I achieve those I keep making the targets higher and I’m excited to see where things will go!

Dan Thornhill: I have so many people to thank for helping me along the way! My family and Girlfriend play a massive part in my everyday life, I couldn’t do all this without their support. The whole CabScreens Husqvarna Team and their sponsors. All my personal sponsors who have stuck with me over the years as well as the individuals who take their own time to try and help me achieve my goals, they all know who they are! Massive Thank you again! #95