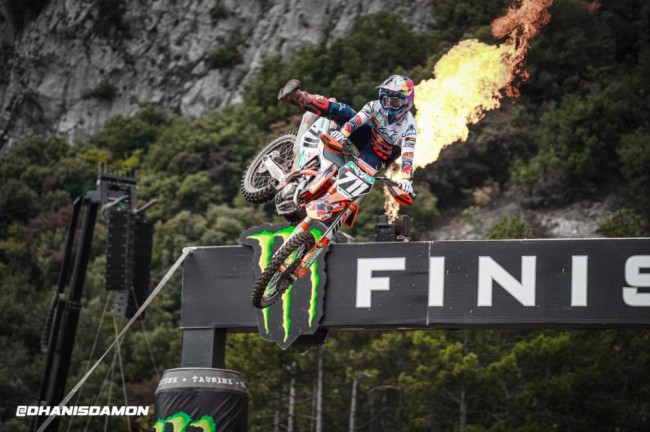 What a week it’s been for Rene Hofer at Arco di Trento. The Factory KTM rider was able to win his first GP overall and was in superb form. With another winter behind him he might be one to keep an eye on for the 2022 season.

Marco Kamper caught up with Hofer to discuss his GP win and more.

GateDrop: First off, I’d like to start off with Wednesday’s race, how good was that, are you still buzzing?

Hofer: Yeah, it was unreal. Everything just went perfect and to be a GP winner now…

Hofer: It’s not strange, but it’s crazy. I woke up the next morning thinking it’s a dream, maybe a bit scared, but it has settled in now. I’m obviously still buzzing about it, but now we need to focus on the last few rounds. The season has already been great with my first podium, my fist GP win. For the last two GP’s I just have to ride the best I can and have fun out there, then I will for sure have a great ending of the season

GateDrop: Did Wednesdays win give you more confidence or does it also add pressure?

Hofer: Nah, not at all. We’ve waited for it, my first podium, but now with my first GP win came quite early. I think I can ride more freely now. To know you can win a GP is a great feeling. I think being in the same position, leading a GP, It’s going to get easier and more natural every time.

GateDrop: Do you think you perform better under pressure, or do you prefer to just focus on yourself and not think too much about it?

Hofer: Well… when you’re leading by 10 seconds, it’s not so easy anymore. I think it would have been easier if Mattia (Guadagnini) would be right behind me. Being far out in the lead you start to think where the other guys are at and what’s the overall standing. You have a bit too much time, you know. The last two laps you get a bit nervous and start to ride more and more cautious, as you have quite a lead. Somehow, I brought it home and it was obviously a great feeling.

GateDrop: With last year not going to plan, with your injury, can we consider this year your rookie season?

Hofer: I think you cannot count last year as a rookie season. I only rode four GP’s. I also had a big break, four months off the bike. It took a lot of time to get used to the speed again. In the beginning of the season, I just wasn’t comfortable racing the other guys, it took a while. Actually, since the summer break I started getting more and more confident, the results got better and better and more consistent. Obviously, the last few races have been great and consistent – we can build on it. With another winter of building and training, for sure next year even more is possible.

GateDrop: With Tom (Vialle) being your teammate, do you like having a strong teammate or is it tough being in the same team as the reigning world champion?

Hofer: Clearly, we can see he is the fastest rider in the MX2 World Championship, he has the best starts, is the most consistent one. I can learn a lot from him. He is a good guy, and I am happy to have him as a teammate. Now it’s Tom’s turn to go for the World championship but when he goes up to MXGP, it’s my turn. Now I’m the young kid, but in maybe two years I’ll be there. Anyway, Tom and I help each other out and his family is really nice too.

GateDrop: Since Austria doesn’t have a GP, this might be the closest one to home, would you consider Arco di Trento a home GP?

Hofer: I don’t have a real home GP, but I have like four almost home GP’s: Mantova, Arco di trento, Teutschenthal and Loket. Those are all quite close to home and it’s nice to have at least some Austrian fans at the track at a couple of races. For sure, it is sad there is no Austrian GP, with KTM being Austrian and Red bull as well. But the motocross scene is small in Austria, maybe in the future if I can keep getting good results, it might lead to a home GP, I sure would like that.

GateDrop: So… do you think there are tracks that can host an MXGP?

Hofer: The biggest problem would be the paddocks, there’s to little space. I think the only option would be to build something at the Moto GP track, like they did at Assen and Imola.

Hofer: Yeah, we’ve started testing it. Already I’m quite positive about it already, but there is still a lot of work to be done in the winter. So, for now I’ll just focus on the last few GP’s. We’re really not far off I can say and I look forward riding the new bike next year.

Get to know René Hofer more with our in-depth interview below conducted a few weeks ago as we discuss his career so far and getting that Red Bull Factory ride. Listen on iTunes here or Spotify below as well as watch on YouTube.