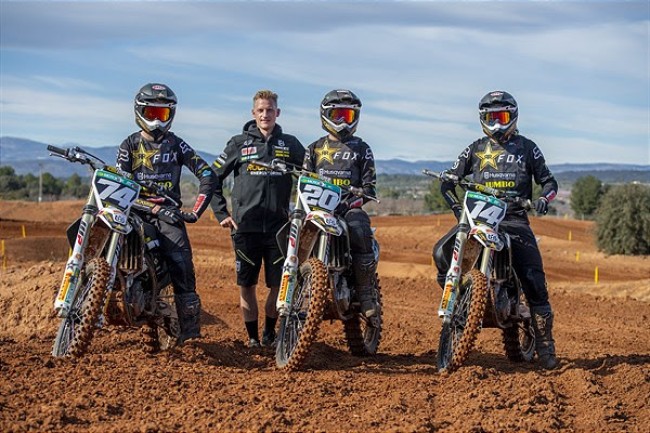 With the 2021 FIM Motocross World Championship starting in Russia this weekend, Rockstar Energy Husqvarna Factory Racing MX2 team manager Rasmus Jorgensen opens up about the long season ahead, the team’s preparations, and his expectations for each of the riders.

Rasmus, round one of the new season is just days away now. It’s been a long, long time since the final GP of 2020, how did the team adjust its preparation for 2021?

Rasmus: “The biggest thing for us was the uncertainty around when round one would be and knowing when to turn up the intensity with everything. The riders have still been riding a lot, a normal schedule really, but more for maintenance instead of any other focused training, just to keep loose on the bike and maintain their bike fitness. When the current calendar was announced we adapted accordingly and now we’re ready to go racing at round one.”

The team enjoyed a strong end to last season with race wins and plenty of podium results. Did the positivity surrounding that success keep the team’s motivation up through the long off season?

“The motivation within the team is always high and those results certainly gave the team a boost at the time as the hard work had paid off. But the racing never stops and we’re always looking forward to the next race. If we had results that were not where we’d like them to be, the atmosphere in the team was still really good and that’s still the same to this day. Last year was my first time as a team manager and probably the hardest one for anyone to start with because of the pandemic but myself and the team adapted, and overall we had a positive season with lots of great results.”

You mentioned last year was your first as MX2 team manager, what was the most important thing that you learned?

“I think the biggest thing was to not take on too much work. I’ve always been hands on with everything and want everything to be super-perfect, which isn’t always possible if you have a mud race for example. I like to be busy, but I’ve learned to spread the work across the team more, and this is working really well ahead of the season starting.”

Things look to be back as a more traditional style calendar for MXGP this year. Is this something that you welcome, or did you enjoy having multiple races at individual circuits?

“It’s a tough one to say. For example, in Mantova, Thomas and Jed went 1-2 overall at the first round there and that started the ball rolling with their confidence and that carried them through the next two GPs there and more great results followed. But on the other hand, at the first one in Lommel they couldn’t quite get settled and that set the tone for the remaining two rounds there. Their results were good, but it was a tough week. Then they both rebounded in Trentino and the results came back. But overall, Infront did a great job to deliver a racing season last year and we’re excited to be racing all over the world again in 2021.”

For 2021 you have one rider approaching the end of his MX2 career because of the age rule, and one entering his first season in the MX2 World Championship. It must be a challenging dynamic for you?

“Yes, it’s completely different situations with them. Last year, Jed met his goals. He did exactly what he wanted to achieve in having an injury free year, getting on the podium, and finishing the series in the top five. He ticked all the boxes. As 2021 is his final season in MX2, he does have a little more pressure to do well and secure a place on an MXGP team but he’s clearly capable and deserving of one. With Kay, he was strong in EMX250 but MX2 will be a big learning curve for him. He just needs to not overthink things and just ride like he knows he can ride. We believe in him 100%. As it’s his first year, we don’t have any huge expectations for him to perform, which is the complete opposite to Jed.”

Going by what’s shared on social media by your riders, they clearly have a strong bond as they’re often training, cycling, and practicing together. Surely, this creates a really good atmosphere within the whole team?

“What you see is exactly how it is among them. None of it is staged, they’re all great friends. They all support each other and want the best for each other. They push each other in training and keep the mood light. I’m super-lucky to have three riders that get along so well.”

What will it take for Jed to win the MX2 title in 2021? He has the bike, the speed, the talent, and the team behind him. Have you found the final piece of the puzzle during the pre-season that will take him to the top?

“There’s been a couple of things but nothing major. We focused on a couple of specific things with his physical side, and Husqvarna also worked on some bike changes. As we saw last year, the depth of talent in MX2 is deep and starts are so important. When Jed started in the top five he could podium, or win, so he has the speed. He just needs to start up front and be able to race with those guys. There’s been a lot of small changes which we believe will improve Jed as a racer and he’s happy with the direction that we’ve gone, so it’s looking good for an even better season than last year for him.”

What are your expectations for Kay this year? Will it be a year for him to find his feet and see what works and what doesn’t, or do you plan to try and harness his raw speed to ensure consistent results?

“Firstly, it’s important that he just focuses on himself. Then he needs to break down the season race by race, including the qualifying sessions, and if things don’t go well in one moto, to move on immediately and focus on the next race. It will certainly be a learning year for him like it is for any rookie in the MX2 class. He is physically ready, but it’s the mental side that you can only master by competing. Once he has a string of solid results put together, he’ll have momentum on his side and that’s when his results will improve as well as his consistency.”

When the season ends, what would determine a successful year for the team?

“I think both riders finishing top five in the season is certainly possible. Obviously, we want to win, everyone wants to win, but we have to be realistic. But we have the bike and we have talented riders that can achieve great things. For Jed, top three overall in the championship is easily achievable after his success last year and I think Kay can slot in somewhere between fifth and 10th overall should he prove to be consistent. For both Kay and Maxime, 2021 is very much a learning year and there is so much to learn in racing. They both have plenty of time on their side and they will use this season as a building year ahead of 2022. As we enter the season, we have three riders that are all healthy, happy, and ready to go racing. It’s a long season and I strongly believe in all of them. The homework has been done and I know that they will give their best effort in every moto. A new season is always exciting and I can’t wait to see what they can do this year.”