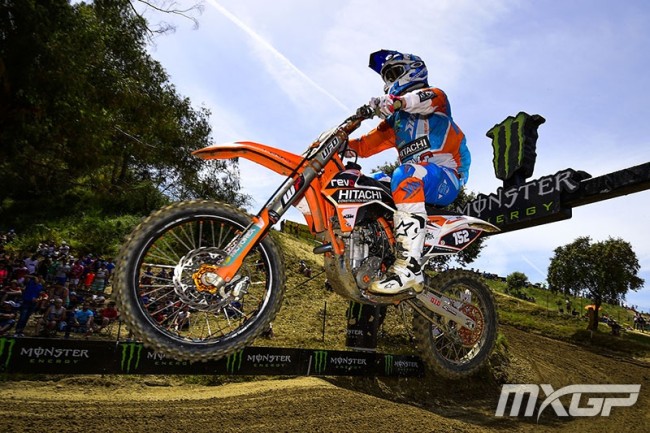 Coming into the 2017 season there was a lot of pressure on Petar Petrov’s shoulders to perform. Not only is this year his last year in the MX2 World Championship but he was also the number one rider in the Monster Energy Factory Kawasaki MX2 awning as he had two younger team mates in the form of Adam Sterry and Stephen Rubini.

Unfortunately for the Bulgarian the season hasn’t gone according to plan and mostly due to injuries. His latest injury coming in Russia where he dislocated his shoulder and means he is now out for the rest of the season.

Despite this season not going too plan Petrov has had some good times whilst coming in the MX2 World Championship and has had some podiums. He will be hoping teams will remember what he has shown in the past so he can get a ride in the MXGP World Championship. Petrov is a huge guy and should actually suit the bigger bike more than the 250cc.

We decided to catch up with Petar to discuss how tough this year has been and plans for the future.

Gatedrop: Petar, it’s been a disastrous season for you due to injuries. Can you just talk us through the injuries you’ve had this year and how frustrating it’s been?

Petar Petrov: Yes, it has been more than disaster this season you know, it’s just one of these seasons that whatever you do nothing goes your way.  I had a decent winter but it wasn’t the best as I had shoulder surgery to be ready for the season but still everything was going okay.

We then had the international race in lacappel and I was feeling good, the speed was good, we weren’t far off the top guys but during the 1st moto I hurt my ankle badly. We went to the doctor where we found out nothing was broken but sometimes ligaments take longer to heal than broken bones.

We tried to race in Qatar but it didn’t work, we just made it worse so I had to take a few weeks off.  I had a decent weekend in Valkenswaard finishing 8th so I felt like I was back to myself but during the next weeks I got some virus in my blood so I couldn’t practice or even race again. I was out for another few weeks but I came back in Russia where I was feeling the best I felt all year and during the 1st moto I lost the front in the mud, crashed and the bike hit me. I dislocated my shoulder so that was it, the season is done.

Gatedrop: With this being your last year in the MX2 World Championship, it’s coming at the worst possible time too..

Petar Petrov: Yes, it is, you know we had goals to be top five and fight for podiums but it just wasn’t our season.  There was nothing I could do, I did my best but just the luck wasn’t on our side this year.

Gatedrop: You’ve been with the MX2 Factory Kawasaki outfit for a few years now, how has everything been during your time with the team? There have been changes for this year I believe!

Petar Petrov: I have been with the team for three seasons. We have had good races and good seasons. There were some changes to the team this season as they moved to France and we had some new people in the team but they have been good to me.

Gatedrop: The under 23 age rule means you have to move up to the MXGP class next year, what’s your thoughts on the age rule?

Petar Petrov: I mean for the rule it’s not a bad idea as it makes the MXGP class very strong but in a way it’s not good for the smaller guys.  It’s not that easy for them on the bigger bike but I have no issue with it.

Gatedrop: You are a huge guy so you should actually suit the 450cc, is that a challenge you are looking forward too?

Petar Petrov: I am really looking forward to it! I love the bigger bike, I am much faster on the 450 and it just suits me much better.  I feel like I can show some good speed and results.

Gatedrop: I believe you’ve raced a 450cc before in the past at Belgian Championships etc, how did they go for you?

Petar Petrov: I have actually competed many 450 races in the past and it went good, I was battling with some top 450 guys. I always enjoyed it but I had a good opportunity with Monster Energy Kawasaki MX2 team and that’s why I decided to stay in the MX2 class. I feel I am more prepared for the big class and like I said I’m really looking forward to it now.

Gatedrop: It’s not easy getting rides in MXGP with the likes of Tixier, Searle, Guillod and Strijbos all thought to be looking. In terms of 2018 have you got any plans yet?

Petar Petrov: No, it’s not easy. There are many good guys and not many places to go but we are working on it and we will see how it goes.

Gatedrop: If worst case scenario, you don’t get an MXGP ride, would you consider staying on a 250 competing at a National series?

Petar Petrov: No, I want to move to the 450cc. I don’t really want to think about moving to a national championship at the moment.

Gatedrop: What’s your thoughts on both the MX2 and MXGP World Championships this year? Obviously in MX2 it’s been Jonass V Seewer and Cairoli has a massive points lead in MXGP..

Petar Petrov: I think both the MX2 and MXGP championship are the best so far. I mean in MX2 with Jeffrey moving up it’s more open for other winners and everyone is motivated to try to get on the podium. There are a few guys that are much more consistent and they are up front in the championship.

In MXGP Tony (Cairoli) has been unreal strong this season, it’s a bit unfortunate that Jeffrey (Herlings) couldn’t start the season in the shape he’s in now as it would have been nice.  There’s so many guys that can win and have won GP’s in the past.

Petar Petrov: I would like to thank everyone who supports me this season, all my fans and just everyone who was there in this difficult season.