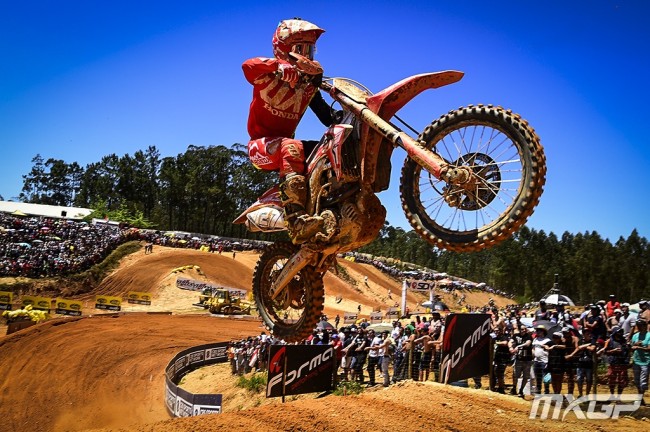 The HRC Honda outfit drafted in Anthony Rodriguez for the last two rounds of the MX2 World Championship.  At the first round in Italy, Rodriguez ended up fifteenth overall in the sand. A week later in Portugal was much improved as he finished eighth overall.

He now heads back to America to contest the AMA Nationals in the 450 class. Our friends at Station MX caught up with Rodriguez in Portugal and were kind enough to send us their interview.

Can you talk me through how the first GP went for you in Ottobiano?

Anthony Rodriguez: Ottobiano was definitely strange for me as the terrain was very different than what I’m used to and it was on a bike I hadn’t been riding very much but I for sure like the sand.

You said you expected to be in the top ten, are you surprised by the speed in the MX2 World Championship ?

Anthony Rodriguez: I’m not surprised by the speed in the GP’s because I knew they were fast as hell. I didn’t go to Europe underestimating anyone that’s for sure we all know they have some serious skills there.

Where you surprised at how rough the Ottobiano got? American tracks don’t tend to get as rough as that!

Anthony Rodriguez: American tracks also get very rough but it is a completely different way and plus I had raced the MXDN in Lommel so I knew how rough the sand can get oversea’s.

What’s your first impression about the MXGP paddock and it’s setup?

Anthony Rodriguez: The European set up is pretty nice, I sure like the hospitality trucks!

Did you prefer Agueda over Ottobiano?

Anthony Rodriguez: I actually liked both of the tracks they were both pretty fun.

Also, did you get a chance to watch the EMX125 & EMX250 classes? What’s your thoughts on the structure?

Anthony Rodriguez: I actually didn’t watch 125 as I was focused on staying rested but I did watch some of the EMX250 and MXGP. I definitely do like the structure, it’s just different than the American version, I don’t think it’s better or worse, just different.

Before Agueda had you heard of many of the MX2 World Championship riders? It doesn’t get too much coverage in America, do you think that could and should be improved?

Anthony Rodriguez: Yeah I heard all about MXGP I always watch the highlights and results of the races as u can find them on American websites as well!