Interview: Pauls Jonass on his strong start to the season – targets a podium! 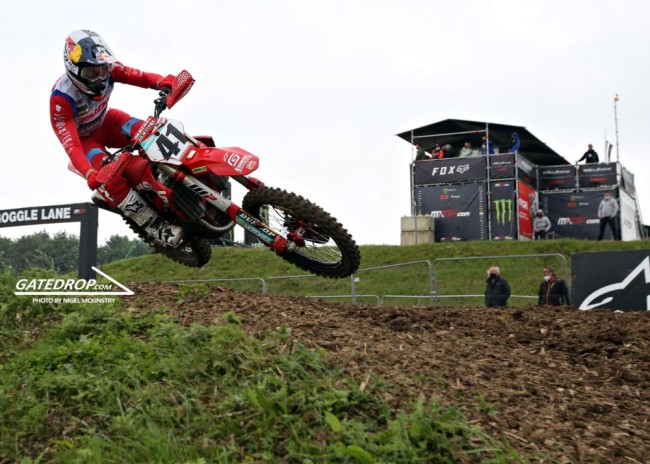 After an injury last year and no pre-season races before the start of the MXGP World Championship this year, Pauls Jonass came into the season without race action for well over a year. However, with the start the Latvian has had you wouldn’t think it.

The former MX2 World Championship signed with the Standing Construct GasGas team coming into the new season and looks great on the new bike. At round one he finished eighth overall and at round two he did even better going sixth overall which is a strong start to the season.

We caught up with Jonass to discuss his season, new team and more.

GateDrop: Pauls, the second GP of the year and you’ve had two very good rounds considering you haven’t raced GP’s in a while. You must be happy with your pace?

Jonass: Yeah, overall I am feeling really good on the bike. I just need to sort out the starts a little bit, the bike is awesome and really amazing. It’s just on me, I need to figure out how to be at the front from the start and then it’ll be much easier for myself. In both moto’s I came from quite far from the back. To go 6-6 is pretty good and consistent and I think the riding was very good. I can still improve weekend by weekend and I think soon we can fight for podiums.

GateDrop: Have you maybe surprised yourself a little by the start of your season? You haven’t raced MXGP in a while and everyone knows just how fast it is at the front but speed wise you’re not far off…

Jonass: I felt much better here than I did in Russia with my body and everything because the first race jitters were gone. I was feeling better than I did in Russia and as the season progresses I think I will feel even better as I haven’t raced for around fifteen months before the first round which is a long time. We had a really good winter and off-season so I would not say I was surprised because I knew my speed is good. I was just a little bit worried with how I was going to be with the stress and everything but so far so good and we will continue to working, I think that will bring results.

GateDrop: Just on the two tracks, Russia was very slick and hard pack, you needed a good throttle control! Matterley Basin was very fast but was it nice not having lots of ruts so you could go anywhere you wanted really?

Jonass: That was the good thing about Matterley, you could switch up the lines because there weren’t so many deep ruts but I think the track was a little too fast overall. I think this year the take off for the jumps were more mellow and not so steep like the years before. In some ways it was good but there’s always some positives and negatives.

Even though you could switch up the lines it was still hard to pass because the main line didn’t get bumpy enough and that was the negative thing. But you know, it’s Motocross, we need to race every surface and like you said, Russia was slick and slippery so you needed good throttle control. Here you could attack the track quite a bit but not as much as usual actually because it was quite slick around the corners. We will see what Maggiora will bring, it’s usually quite hard and rutty so we will see.

GateDrop: The two tracks so far, maybe in the past wouldn’t be your favourites but after Italy we have some sand with Oss and Lommel coming up – perhaps a podium could be on the cards as those are the conditions you excel at even though you’re an all-rounder?

Jonass: I would say it doesn’t really matter to me whether it’s sand or hard pack. I think I can fight for a podium at every single surface and that’s our goal with the team. I feel good in sand and hard pack, I just need to work on a few things. You know, the team have been supporting me the whole time and they’re awesome so I know we will get there. We just need to continue working and soon you will me on the podium.

GateDrop: Just on the team, I feel there’s a really good atmosphere with the Standing Construct team and I think Tim Mathys does a really good job there. How does it compare with other teams you’ve been with?

Jonass: The team is really really good. I enjoy being there and I feel like part of the family. I have a lot of freedom so I can pretty much do whatever I want and they will always support me and they’ve built really good bikes. There’s no negative, I can only say good things about them and they’ve been supporting me all the time. Actually first of all they give me the opportunity, after the injury no one really wanted me so they supported me through all those things. Now they deserve the podium so I will try my best for them.

GateDrop: I can’t believe no one wanted you after the injury, is that frustrating? I feel like you always go under the radar and people forget just how good you are!

Jonass: That’s sport, you know? People only remember the last race and have short memories that is normal. That’s motocross and the business we are in.  For sure it is frustrating but I cannot change that, I just need to make sure I am always up there at the front (laughs).