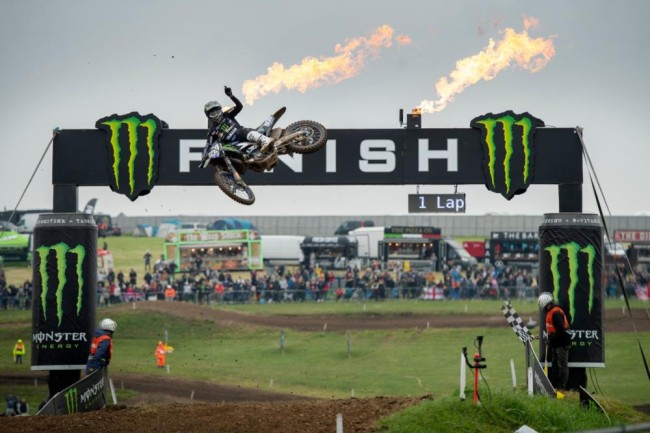 Maxime Renaux has been knocking on the door for some time now. Always talented, the Frenchman has had a couple of tough years in MX2 previously that have stopped his momentum but now he has everything going in his direction.

Promoted to the factory Kemea Yamaha team this year and now winning the British GP with a 2-1, Renaux looks calm, cool and collected out there as he mounts a challenge for his first world title. We caught up with the British GP winner to get his thoughts on his win.

Great ride today, especially that first moto, what are your thoughts on getting the win?

It was really good. I’m really happy first of all getting my first holeshot in the world championship and also getting win here it’s really good, a bounce back from Russia. Really happy, everything went well, so good day.

Did you feel the pressure leading? You seemed pretty calm throughout, even though those guys weren’t too far behind, but you had a wee gap…

I was feeling good, no pressure actually. I was just taking it easy and not trying to over push, if you win with over 50 seconds or two seconds it’s the same points, so I just pushed the first 20 minutes and really went on cruise mode let’s say for the last ten minutes and it was enough to win. The first moto was really good.

The second moto you didn’t get as good a start, you were coming through but when Boisrame went down you seemed to up your pace, you went from sixth to second pretty quickly. Did you see that was the moment to win the overall at that point?

Yeah, actually I started quite far back, I think I was around 14th or 15th. The start was not bad but I got closed off by one guy that started a little bit better and then made a great first lap. From mid-moto to the end I made my push let’s say and came back. I think I could have pushed a little bit more to go for the win but second was enough for the overall win and was good points, so that was enough for me and I didn’t want to take any risks, crash, and lose the points, so yeah, it was good.

Now the championship is very much on with what happened to Vialle today, I think you are now only a handful of points out of the lead, you must be feeling good now for the rest of the season!

I feel good, being second after the second race is great, now I just want to build like last year. Step by step getting my pace higher and higher, also the confidence, so really looking forward to the next races.

You are in the factory team now, it didn’t look like you had any problems with pressure today taking the win. Do you feel good with the team and ready to go for this title this year?

Yeah I feel really good with the team actually. They are not putting pressure on us. Yeah, if I can win they are going to push me to win but there is no pressure and they are really good with me. I also kind of like the pressure, the more pressure there is the better I’m going to be. I work like this and it’s good to be in this team, they work really hard. After Russia we had some improvements to make on the bike, they really listened and this I really appreciate so that was good.

You have had a couple of tough years with injuries, then climbing your way slowly but surely up to this stage, is it nice to finally be at the front and a world title contender after some tough seasons?

For sure, after some tough seasons it always feels great to be back leading a moto and winning a GP and step by step I built to come back here and I think now we have a strong base. Yeah, we can build smart and try not to make mistakes because the season is going to be really long and I think consistency is going to pay.