Fast Febvre on the British GP 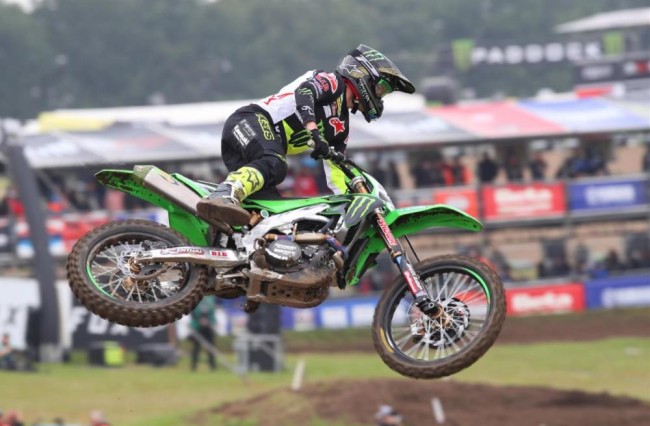 Third fastest during Qualifying practice in the morning Febvre was closed down by his gate rivals immediately out of the start in race one but already showed forceful style during the hectic opening lap to break into the top ten. From that point advances became more difficult around the high-speed track with its sweeping turns through the rolling South Downs landscape. After a decisive move for ninth on the next lap the Frenchman had to wait a quarter of an hour before the next opening presented itself but, once through to eighth, the Green leader immediately sprinted into the wheeltracks of the leaderboard pack and, with a startling downhill pass, advanced to seventh to put pressure on the riders ahead of him. But a further opportunity did not arise and he had to be content with a hard-earn seventh at the finish. Romain’s choice of gate for race two proved optimal when he grabbed his first Holeshot award of the season and defied all attempts to wrestle the lead away through a dramatic opening lap as drizzle returned to the valley to make the track surface even more slippery. Once the immediate threat from behind had been resisted the Frenchman could concentrate on his own lines and he established a solid lead of six seconds at one stage with a typically smooth ride on the impeccably-prepared KX450-SR. Responding with the fastest lap of the race as the ferocious competition in his wake started to nibble away at his lead he continued to lead until the penultimate lap as his closest chaser was able to mount a surprise attack; unruffled by the move Febvre immediately responded and the duo exchanged the lead several times before his rival – the defending world champion – eventually snatched a slight advantage. The move cost the Kawasaki rider his first race win of the season and his second consecutive podium but he has consolidated his third place in the series points standings as the series heads to Italy next weekend at the magnificent Maggiora facility where he has recorded two of his most emphatic career victories in the past.

Romain Febvre: “A lot of guys were fast today and with a bad start in the first race it was not so easy to come back through the pack; my jump out of the gate was good but I was maybe too far inside and after the first corner I was outside the top ten. I came back strongly to seventh, but then the speed was similar with my rivals and it wasn’t possible to make the difference. I changed my gate pick for the second race and my start was much better as I got the holeshot and for sure that made life much easier! There was one section on the track where I didn’t find the best line; that is where Tim passed me as I didn’t know which one he would choose. We exchanged the lead several times during the last two laps and in the end he won; it’s always frustrating to lead all the race apart from the last two laps but that’s it; we’ll continue to work before Maggiora next weekend.”

Only able to ride once in the last two weeks after his heavy crash in Russia KRT teammate Ivo Monticelli rode a solid first half in race one to recover from a mid-air collision with an errant rival on the opening lap and advanced to eleventh position before two errors pushed him out of the points in twenty-second. He was moving forward from an early stop to take fresh goggles in the persistent drizzle to reach eighteenth place halfway the second race before a further crash again pushed him out of the points in twenty-third. The Italian will work with the team this week to get his body in shape before his home GP at Maggiora.

Ivo Monticelli: “It was a really tough day. I didn’t feel too much pain from my crash in Russia but I could only ride once the last two weeks; I didn’t have a really good feeling and it was hard for me to find my speed today. My start was OK in the first race but I made contact with Jacobi on a jump already on the first lap and lost many positions. Then I crashed two more times and was out of the points. My speed felt better in race two but I had to stop to change goggles and I crashed again later in the race. We know from the warm-up races that I have the speed so we will work to be in shape for the GP in Italy next weekend. “