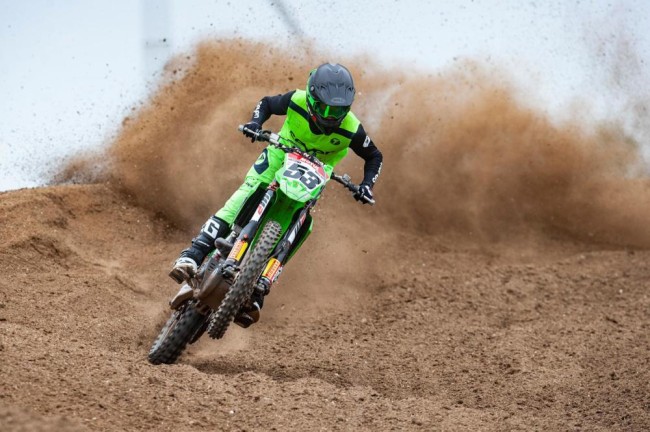 Dylan Walsh impressed a lot of people last year with his raw speed on a 450 in both the British championship and the MXGP series. For 2021 Dylan is back with his Revo team that he rode for in 2019 and he is going all out for the British title – before he heads to America at the end of the season!

We caught up with the Kiwi to discuss the upcoming season and his US supercross plans for 2022.

Gatedrop: New team for you this year, kind of, going back to Revo but up onto the 450 Kawasaki. Are you enjoying the bike, the team and familiar surroundings again?

Dylan Walsh: Yeah, obviously the team is really good and I get along with everyone really well and it’s not foreign for me so that’s a bonus. So far I have been really stoked on the bike straight out of the box and the team has been able to do a lot for me and make me quite comfortable. Obviously it’s still a bit hard to know where you are at until you race but at the moment I am pretty stoked on it.

Have you had much chance to ride the bike through lockdown?

No, during lockdown I didn’t ride at all, I started riding I think at the start of March. I headed off to Spain and that was the first time on the bike. I have been trying to do as much riding as possible, even just testing it’s hard to get time for testing when everything is quite strict but other than that I feel like we have done a pretty good job with the cards we have had, it’s been good.

Do ever get homesick or are you used to the UK and the bad weather and stuff?!

Yeah, I’m used to not being in New Zealand, I have only spent one Christmas in New Zealand in the five years I have been here, so I am pretty used to being away now.

Going back to last year when you got the ride with Jacky Martens, how did you feel that went for you? You opened a lot of eyes with your speed it must have been a great experience, do you feel you learnt a lot through all that?

Yeah I was super stoked to get the opportunity to come back to the GPs, it was a shame because I was still eligible for MX2 but I took the opportunity as good as I could. The biggest struggle I had before was I was practicing a lot of supercross beforehand. It was a last minute back to motocross and with no testing and whatnot, just jumping in the deep end just trying to get better each time. But I felt like I showed I could ride a 450 and I have the speed and stuff, I just have to put the package together and I can be a top rider.

Does that help your confidence to come back and ride British championships, because you have raced at the elite level and proven you have that capability?

Definitely, I have had a good few weeks training so I am quite confident of where we are at at the moment.

Your schedule for this year, are you concentrating on the British and MX nationals? Is there a chance you will still do some MXGP – even the British GP?

Yeah we are 100% in for the British GP at the moment. I should be doing quite a few GPs – just depending on which ones work out for the team.

And goals for the British Championship? It’s a pretty tough class with Tommy Searle, Shaun Simpson, Jake Nicholls and a lot of other guys, are you aiming to win it/ top three? What are the goals?

Yeah, this year it’s quite stacked but anything short of winning it, myself and the team will be quite disappointed.

And GP wise have you set any goals for that?

There are no goals because I’m just doing a few GPs other than to just go there and ride like I know how to ride and have no stress there.

Is this year a stepping stone to get back to MXGP full time with the team you are in or what is the long term goal – America?

Yeah the long term goal is I am going to do this season with Revo in the British and then the main focus is heading to California in October to get ready for East coast supercross.

Oh, very good! Have you teams and stuff lined up for that or do you know people there that can help you out?

I am putting together a privateer package at the moment just to get out there, so at the moment it’s just privateer but I have a few people helping me out and it should be a good gig.

Are you planning to stay there for outdoors which should be a bit more familiar with your British and GP experience?

Yeah but it’s a bit harder to do outdoors as a privateer, so the main goal will be to do supercross and see what that leads too.

You have contacts with Mitch Payton and stuff so hopefully you will be able to get competitive equipment? And I’m sure your MXGP racing has helped get your name a bit more noticed out there?

Yeah exactly, I know quite a few people out there so I think it’s time I bite the bullet and bet on myself, just go out there and do it.

That is something you have always had in your head, race the world championship and race in America, so you are going to get to tick that box off as well!

Yeah as a kid it was the only thing I wanted to do, it was my only goal. I had no real interest in Europe, it was hard to follow back in NZ growing up but the opportunity I got to come to Europe I took it and it was a good thing to do. It has definitely helped me out for the better and I wish I came earlier but I still want to go and chase my dream.

A lot of riders seem to follow American racing in New Zealand and Australia, is that just because the World Championship doesn’t have the same exposure down there? In the UK we watch both but NZ and Australia, America just seems to be on the radar?

Yeah well supercross is televised in New Zealand which the GPs aren’t. I’m not to sure what the reason is but everyone knows a lot more about supercross than GPs which is a shame really because it’s a tough gig over here and you have to appreciate everyone over here doing it.

Does that make it harder when you come to Europe because you don’t have the exposure of what it’s like? Racing in different countries and seeing the level, is it difficult to transition to?

Yeah, it was big difference. I went into the European classes first but I didn’t know anything about EMX or EMX250 so it was all a big learning curve but once you are here it all goes quite smoothly, everyone is here to help. It works out quite well once you are here but getting here is the hardest part.

Does living in the UK help because it is a more similar culture and language instead of living in Belgium or Holland full-time?

Yes and no. Living side of things with the language, it’s definitely easier in England but to ride, travel and test, Belgium is a lot easier I think. If you had to do it straight off the bat, you would go to Belgium I think.