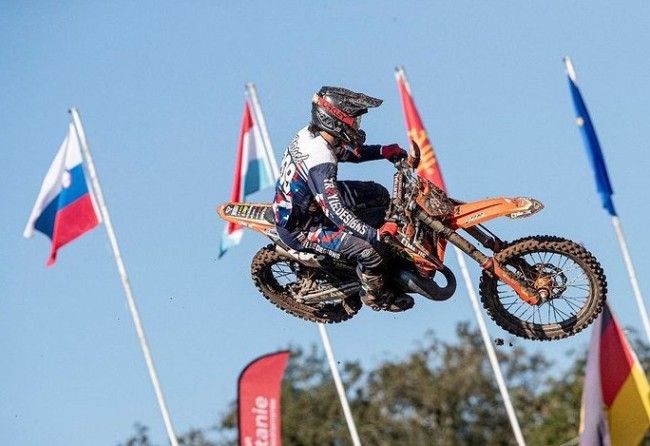 At the last two rounds of the EMX125 series, Nicolas Israel from Chile has been in the paddock after inking a deal with Spanish team, Jezyk KTM to contest the rest of the championship.

We caught up with Israel to discuss his first two races with the team, plans for the future and more.

GateDrop: You signed a deal with Jezyk KTM to contest the EMX125 championship, just how did the deal all come about with the team?

Israel: The deal started to form with a friend of ours that works in the GasGas125cc Junior team. He made contact directly to Jezyk Racing Team to bring a Chilean to the EMX125 championship.

GateDrop: It’s a Spanish based team so I guess you are spending plenty of time there, how do you find Spain?

Israel: Yes, I’m staying with the team at Olot in Spain. I’ve been riding a couple tracks like Roccos and I’ve been enjoying my time here.

GateDrop: You made your debut in Germany, how did you feel going into the event and did your day go?

Israel: Going into the event I was really excited to be able to race in a completely different environment and with new tracks, people, riders, and everything else. My weekend went pretty well as an experience and learning weekend. The results were not the best because of a couple mistakes.

GateDrop: France went better for you scoring your first point at Lacapelle Marival, can you talk me through your day in France?

Israel: In France I scored my first point. Happy about that but at the same time it was a bittersweet feeling because it was a tough weekend. I couldn’t feel myself at all, all weekend long. I had to fight with the track a lot and with crashing a couple times in the first moto ending 30th and with a bad start ended 20th second moto. It was the first point but I want more.

GateDrop: What’s your first impressions of the EMX125 series after the two rounds you’ve competed and how did you find the tracks? I thought both tracks were technical…

Israel: Everything is so different it’s like a complete different sport. Tracks are so different and brake up in a such different way that it is challenging but at the same time it’s awesome to be learning new tracks and making myself better on what I’m not used to riding. The event in itself is beautiful and awesome. It’s like your a pro rider at an amateur level. 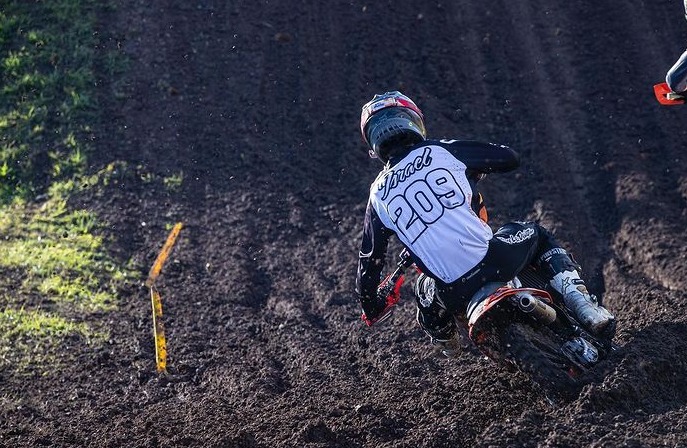 GateDrop: You have raced for many years in the American youth racing I believe. What’s it like racing there and what are your best results at Mini Os and Loretta Lynns?

Israel: Yes, I have raced in the US for a long time. Racing and training at a full time base is awesome. Staying in California it is nice to be able to ride with pro riders for a couple days each week. I would say I made a big change as a rider from last year to this year. I made myself a lot more competitive but still not getting the results I look up to.

My best moto this year at Loretta’s was a 6th coming from the back. The rest of moto’s had a couple problems or bad starts but I learned a lot and excited for next years Loretta’s. This year I won my first 2 AMA titles at Mammoth Motocross. I’ve been wanting that for a long time and I’m excited to keep fighting for more. The Mini O’s last year was tough with one week of riding after a shoulder injury but I’m excited for Mini O’s this year in November.

GateDrop: How would you say the EMX125 series compares to the youth racing in America?

Israel: It is very different. Here in the EMX series you have specific classes that you go grow up as you pass by every class before you go pro. So, you take EMX125 a lot more serious than in the U.S. Over there you go to races and there is 40 classes, you have stock and mod classes, age classes, and your used to short moto’s usually. The longest race you have is the 20 min moto’s at Loretta’s. In the 125 classes in the U.S many riders don’t go through that stage and just jump from the 85’s to the superminis to 250’s where you have A, B, and C classes. The front guys are always fast but there is more competition here.

GateDrop: The youth racing in America are sprints I believe whereas you get 25 plus two laps in the EMX125 series, how has that been adapt too?

Israel: Yes, like I said in the last question races in the U.S are usually sprint moto’s like five laps. It’s been hard getting used to the 25+ 2 laps as I’m used to going all in first couple laps. I’ve been learning to be more calm and not burn myself out in practice and qualifying.

GateDrop: What’s the level like of the EMX125 series?

Israel: The level is really high. The front of the pack is really fast and there is a lot of competition through the rest of the riders. For me it’s a learning experience these couple races and build from what I have. Like I said, it’s totally different and I will be getting better.

GateDrop: Obviously you are from Chile, it’s not exactly a country known for Motocross – what’s the sport like there and you must be glad to have raced in America previously and now in Europe?

Israel: Chile is not very known but it has a couple of known and good riders. We have Pablo Quintanilla and Nacho Cornejo in the off-road level racing Dakar. We have a couple good motocross riders that race in the U.S just like I do and a couple that stay in Chile. Races in Chile are not the best but with a organization has changed a lot for this year, I went to the last event and it was a lot better – I hope the level grows.

GateDrop: What’s your goals for the rest of the EMX125 series?

Israel: My goal is to have fun and learn as much as I can. I want to get the best results I can and keep growing as a rider. I want to build up for next year and for the future.

GateDrop: Have you got a deal with the team for the 2022 season – would you have another year in the EMX125 class or would you have to move up to the 250cc for next year?

Israel: This is my last year in the 125cc class. After this I will go to race the Mini O;s with a 250cc and stay with 250’s from there on. I don’t know yet. For now I will race all I can in the U.S. I will keep in touch with Jezyk racing team and if I have time in between races in the U.S, I would love to come back to race the EMX250 series.

GateDrop: In terms of your future, would you have a preference racing in America or the GP paddock?

Israel: For now, I will have the preference racing in the U.S but I would love to come for a couple of GP races if nothing changes for now.

GateDrop: Anyone you’d like to thank/anything else to add?

Israel: Yes, I want to thank Troy Lee Designs for always making me look good. Jezyk Racing Team for all the support and for representing me the best possible way here in Europe! Flow Motion for the bike and bike setup, All my personal sponsors and my team sponsors! As well as my family for all the love and support! Dad and Mom that all this is thanks to them. Cristian CRZ for the companion all this time and for your knowledge that makes me trust the process and my sister for always being with me through this life race.