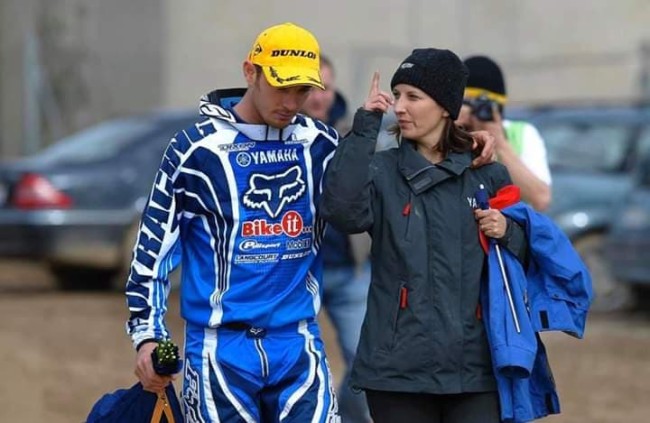 Andrew McFarlane was a fantastic motocross rider and had a great career competing in the MX2 World Championship and America. The highlight and his best season was in 2005 when he finished second in the MX2 World Championship behind Antonio Cairoli. If it wasn’t for a double DNF at a round of the series, who knows what way the title would have went.

The Aussie who was very well liked in the paddock sadly passed away 10 years ago after a practice crash but he’s never been forgotten and we are still waiting for an Aussie to top his GP World Championship finish from 2005.

We caught up with his beloved wife, Natalie McFarlane and part one of the interview discusses his racing career in which he had plenty of highlights.

Gatedrop: Andrew was a young rider trying to make it in the Motocross world coming from Australia. During his time in the GP paddock, what countries did he decide to live in and what was it like for him having to adapt to Europe? What was that like for you as well – was it tough being away from home?

McFarlane: We lived in Italy for one year and Belgium for four years. Adapting to Europe was not to bad as the Rinaldi Team took us in like family, which made our first year in Europe as easy as it could be. What amazing souls The Rinaldi Family looked after us so well. We lived in a little village called Casatico, Province of Parma. Andrew adapted very well to life in Europe as he was so starstruck with all the race teams and the new tracks he was living his dream.

Andrew was so happy.  I remember Andrew and I with our little translator book trying to order dinner in a pizzeria, going to the grocery store and trying to work everything out. The house we lived in had a big barb wire fence and I remember being quite scared as in Australia we only have those around our prisons. The second day we arrived in Italy, Andrew went on a trail ride with the Rinaldi boys for the day and I stayed home and accidentally locked myself out of the house after the first hour. I sat outside all day crying and scared and when Andrew came home I said I’m going back home and started packing. Andrew calmed me down and yeah I lasted 8 years in total overseas. That’s a funny story to me now. I missed home but I loved Andrew more so living overseas ended up being the best years of my life up until I had Tayla.  Then when we moved to Belgium it was a lot easier as most people spoke English. We made such great friends in both countries. These friends I still keep in contact today, very blessed. Most in which I call family.

Gatedrop: Andrew won his first world championship Grand Prix race in Italy, 2004 I believe. What are your memories from that day and what sticks out – he must have been over the moon that day?

McFarlane: My greatest memory of Andrew winning that day was the most amazing kiss he gave me when he saw me after winning and that hug was the most amazing hug we have ever had. Mt heart is so grateful we have gorgeous photos of this memory. My favourite photo of us.  I think we both felt all of the sacrifices and hard work had paid off. My other memory is Andrew’s Dad telling him “Well Done” and hugging him,  followed by all our beautiful team and fans that were so happy for Andrew. It was the most amazing day that I will hold close to my heart. It takes a team of people to win races and our hearts were grateful to everyone. 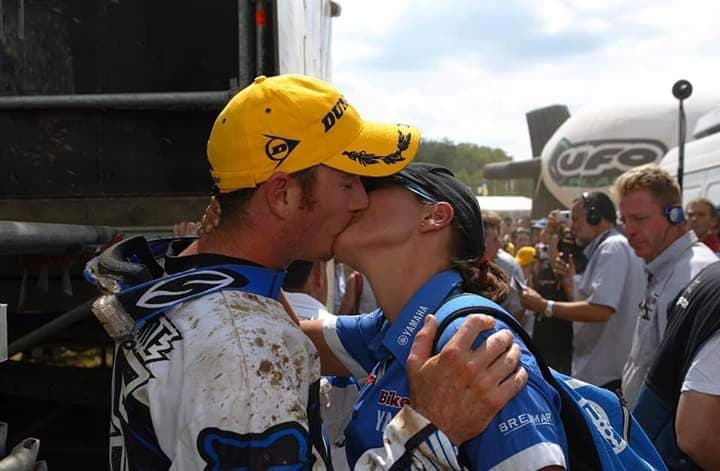 Gatedrop: In 2005, Andrew finished second in the MX2 World Championship losing out on the title to Antonio Cairoli. He must have been really happy that year!

McFarlane: To be honest it was a hard pill to swallow to come second. Andrew took this very hard as he was leading the Championship and unfortunately had 2 DNF’s in one round due to mechanical issues. That was hard to take so I believe after that Andrew struggled a bit to come back from that and unfortunately came second. Second in the world is an amazing achievement but I guess nobody wants to come second. Massive congratulations to Antonio, I still speak with his beautiful wife and follow their journey.

Gatedrop: I’m sure Andrew had some unhappy moments as well, riders want to win! How would he have handled a bad race or if the bike was setup wrong for example?

McFarlane: Andrew would just get so disappointed and angry at himself. He was never one to blame others or the bike. He worked extremely hard on bike set up.

Gatedrop: After the GP’s, Andrew raced in America. How was the American experience for you both coming from the GP’s?

McFarlane: Coming to America was a very different feel. I would have to say that Andrew and I preferred Europe to our American experience.

Gatedrop: When you think back, what races stand out for you the most when you look back at the career Andrew had?

McFarlane: Definitely life in Europe stands out and Andrews wins in Italy and England. I think Andrew had an amazing career and was very fortunate to have seen the world travelling and doing what you love. We had an amazing life and Andrew will always be my hero, my champion I am so very proud of him. 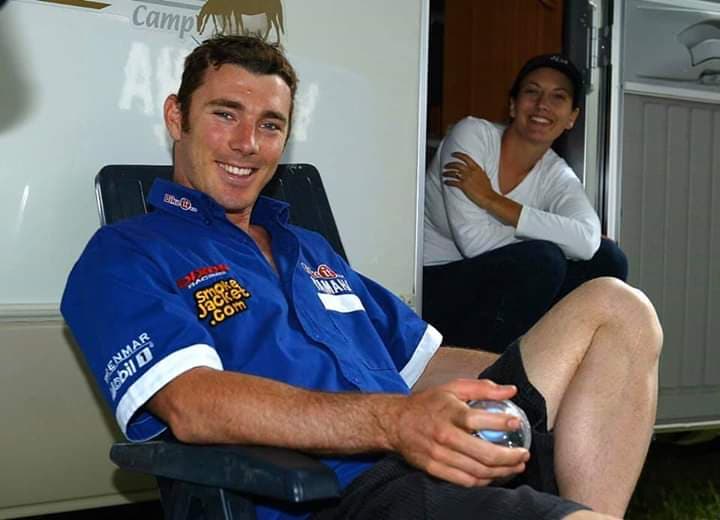 The happy McFarlane’s chilling out at the camper Pic: Ray Archer Photo

Gatedrop: How has life changed for you – do you miss travelling the world or are you content with life in Australia?

McFarlane:  Our life without Andrew is very hard but I always say we are strong girls. We miss him so much and feel robbed that he was taken away so young and especially before he was about to retire. I have been on my own since losing Andrew which is 10 years, and have raised Tayla to the best of my ability.  I have little family as my parents have passed away. I have a beautiful sister and her family and friends that I call family, so we feel very blessed in this sense.

Andrew never gave up and was very brave and strong we live by this and I would never let Andrew down so we live our lives as happy as we can so he is proud of his girls. I miss travelling the world so much, I miss our friends, the food, the culture. My daughter studies Fashion so I am hoping her journey leads her to travel the world as apart from having Tayla these were the best years of my life. I feel very blessed to live in Australia, we feel safe and it is very beautiful here we are close to the gorgeous beaches and a short flight away from The Great Barrier Reef. We just miss Andrew, our Hero, our Reason, our Everything.