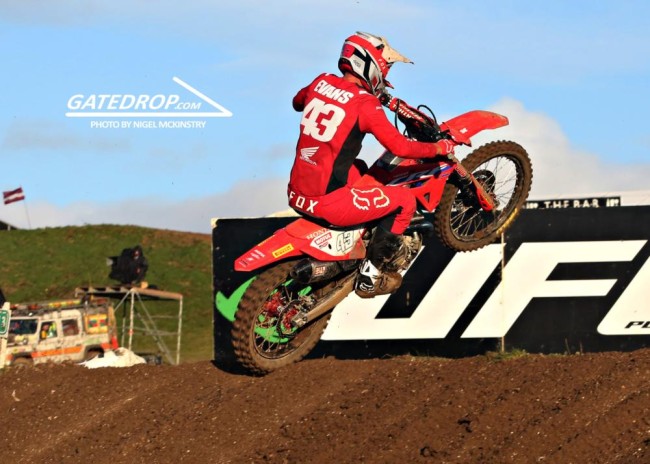 Looking back at the opening round of the MXGP World Championship and one of the revelations of the weekend has to be Mitch Evans performance. The Aussie was making his HRC Honda debut as well as his MXGP debut after making the jump up from MX2 but he looks superb on the bigger bike.

The Aussie went 3-7 for fifth overall on his MXGP debut, an amazing result and riding. In the second moto Evans got a horrible start but had no issues coming through the super stacked field. Evans got his way into sixth but towards the end Coldenhoff found his way past to demote Evans to seventh but he rode really well.

If the first round is anything to go by then Evans is going to be a podium contender as he looks the real deal. We caught up with him to discuss his weekend and much more.

Gatedrop: Mitch, that was an unbelievable MXGP debut for you, you must be stoked on how your weekend went at Matterley Basin?

Evans: Thanks. Yeah I am really pumped on that first moto and really happy with my riding in the second moto. I’m just a little bit bummed about my start, I think that cost me a podium this weekend and that was my goal, to land on the podium. A lot of people were probably shaking their head at me saying that before coming here but it’s cool to prove I have the speed to run with these big boys.

Gatedrop: You say your bummed about the bad start but you passed so many fast riders, that should help your confidence starting from way back and still getting to the front?

Evans: Yeah it is a little bit of a confidence booster but it just makes life a lot more difficult and we’ve been working on starts all pre-season to make sure we had them sorted. But we struggled all weekend with the 32 tyre spinning up on the gate and that’s what happened. It is what it is but we will get to the bottom of it and find out why. It’s just one of those things, you do testing all pre-season and never have an issue with it and then you come to the first round and something comes up from out of nowhere and bites you on the ass.

Gatedrop: Well, if something is biting you on the ass and you’re still finishing fifth overall it’s still a good weekend!

Evans: Yeah, I guess. From the outside everyone is probably thinking why I’m upset but I think I proved in both moto’s that I had the speed to land on the podium this weekend and as a racer you always want to be running at the front and that’s the way it is. But like you said, I’ve got to take the positives and I’m really happy with my riding so it’s a good way to start the season.

Gatedrop: What was it like in the first moto in behind Herlings? It must have been great to learn and pick things up from him..

Evans: Yeah, it was cool. Jeffrey, you know, how many world titles has he got and he’s a bad-ass on a bike. When I was in behind him I was kind of like, okay this guy is really fast, I won’t try to get around him, I’ll just see what kind of pace he sets. Then he dropped his lap time by three seconds and I was like okay, see ya later mate, I’ll see ya at the end of the moto (laughs). 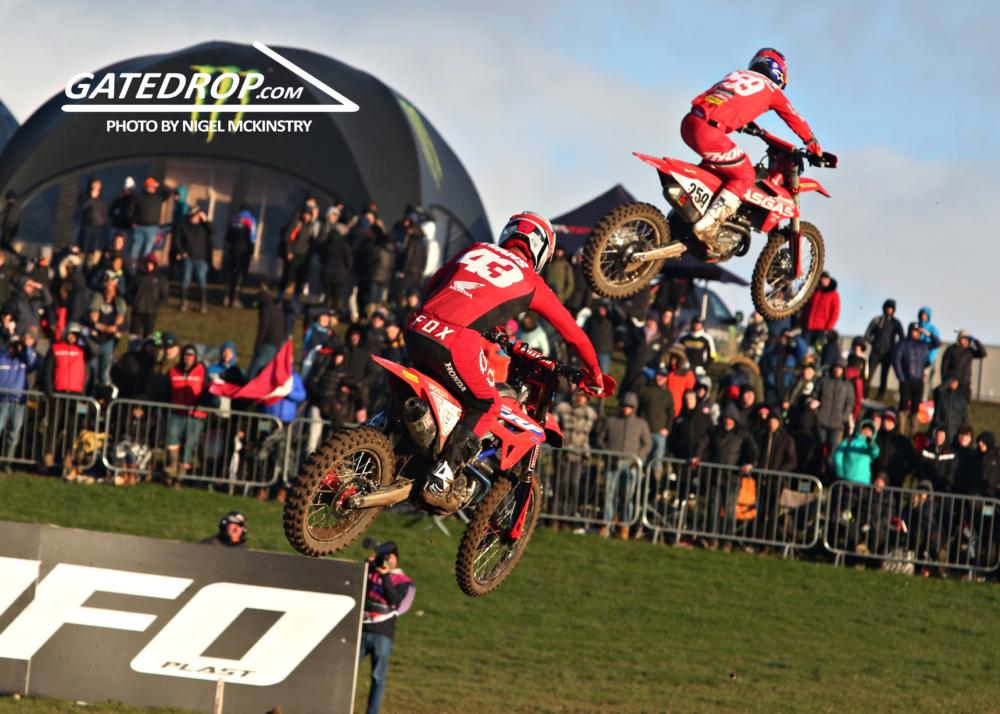 Gatedrop: Running with him for a few laps must be really good for the confidence? Your an MXGP rookie at the end of the day and you’re going to improve as you adapt to the bike..

Evans: Exactly, it’s funny the first time I raced him was at the 2018 Motocross Des Nations at RedBud, I got a decent start in that last moto and two laps later he passed me and just blew my doors off. I felt I was standing still and I just thought holy sh*t, it’s cool to see how much I’ve improved in like a year and a bit.

Gatedrop:  Having someone as fast as Jeffrey in MXGP, it most be good for the motivation because he can give you something to work towards?

Evans: Exactly. He shows every week pretty much that he can go a lot faster than what a lot of us are going. It’s good to have someone to study but it’s always frustrating because he’s really fast every weekend.

Gatedrop: What’s your thoughts on the MXGP class after your first round? Honestly that’s probably the most stacked I’ve ever seen it but the way you were passing riders in that second moto you probably don’t see it like that!

Evans: Yeah, that’s what I mean, before I came here everyone was telling me and naming names. I just said who cares, they’ve all got two feet and a heartbeat just like me, you know. Sure, they’ve been around here and are older than me which means they’ve got more experience than me but I’m young and dumb and know how to twist the throttle so can hang it out a little bit.

Gatedrop: What was your thoughts on the track? I thought it was rough and technical and I enjoyed watching you guys out there.

Evans: It was something else, that’s for sure. It was something I haven’t ridden in a long time, we got really lucky with the weather today and the weather we had the last few days kind of turned it into what it was. It was real technical and a lot of lines to choose from which meant a lot of passing options. You had to be really precise and looking forward, keeping your feet up out of the ruts and not dabbing them.

Gatedrop: What are your plans for during the week before Valkenswaard, a few days sand riding I assume?

Evans: We’ll have a couple of days in the sand just to get used to the sand feeling again if we can, if there’s any tracks open in Belgium or Holland. I’m looking forward to it, Valkenswaard wasn’t such a great weekend for me last year but I think it’ll be a better weekend this year.

Gatedrop: I remember speaking to you at Valkenswaard last year and you didn’t seem a big fan of the track because it was so hard underneath and deceiving but now you’ve raced there it should help you?

Evans: Yeah but the track here today was way different to what it was last year because of the weather and I think how the weather is going to be for Valkenswaard, it’s going to be the same. It was really hard because it was 15 degrees and sunny, everyone was walking around with t shirts and shorts on. This year I think it’s going to be a lot different, the track should be deeper and softer. I am looking forward to seeing how it turns out, hopefully the weather is kind to us and we don’t have to ride in snow like the guys did two years ago.