Interview: Mel Pocock – adapting to the 450 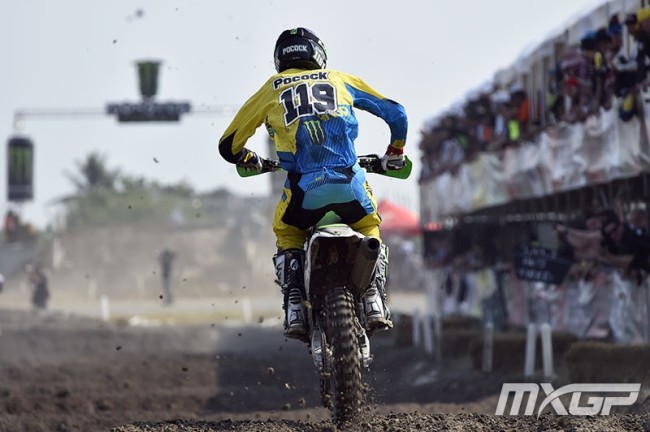 Mel Pocock has had a solid season so far on the ASA United 450 KTM in his rookie season on the big machine.

Desertmartin looked to be another step forward with Mel running third race one and looking on for a podium but a rear wheel issue meant a DNF and, despite strong second place in race two, Pocock was unable to make the box for the first time in MX1.

Despite that disappointment, Pocock was still in good form after the race when we caught up with him to get an assessment of his day and adapting to the 450 this season.

You were going very well today but that first moto DNF has cost you an overall podium.

Yeah I feel robbed ( Laughs). The rear wheel came loose then the chain came off, bent the sprocket and done a load of damage around the front sprocket.

There wasn’t really a chance of me finishing this race – the daylight robbery of the weekend! (Smiles). I know there were a lot of malfunctions and a lot of problems for other people in that race, but you have to be in it to win it and sometimes it falls your way and sometimes it doesn’t.

I feel like I should have been stood on the podium today. But I’ll take it on the chin, I’ll just have to wait a bit longer I guess!

You were riding good in that second moto…

Yeah I was pushing hard. Jake Shipton made a mistake in front of me and that gave me a new lease of life and chance to jump on him and see if I can get him.

Lee Tolan has done a great job for me sorting out this ASA United KTM team, my 450 is good and I am adapting to it. Hopefully I can see myself on the podium in the near future.

As you said it is a new team but you seem to have been riding solid all year, are you enjoying the bike? Is racing it any different for you?

It’s completely different racing to training on it. I was on it in the winter and I was really going well on it and then I did my first race and I was trying to race it like a 250 – and you can’t. So I’m learning the bike, it might take me a year but if it takes me a year and I can still put the bike on the podium then I’ll be smiling on the way home, that’s the goal.

You spent a week with the Irwin family – did they make you any faster this week?!

Who is the fastest Irwin? I don’t know! They are a cool bunch of kids, they are all talented in their own way. Graeme stepping over to road racing, it’s a tough old game to be doing that. There is never a dull moment that’s for sure!

You spun a few laps with Graeme – were you quicker than him!?

Yeah of course I was, Graeme knows deep down I’ve always been quicker than him – it’s just the timing was wrong! (Laughs).