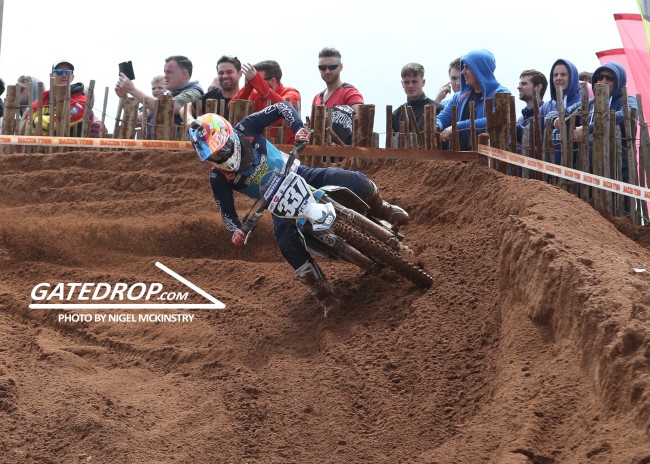 Glenn McCormick rode fantastic at Desetmartin in the MX2 class. The Unique Fit Out Husqvarna man ran second for a mega opening two laps before settling in and battling for a top five position all moto, only losing out on fifth on the penultimate turn of the race when championship leader Dylan Walsh found his way by.

But McCormick had shown what he could really do at that level and in race two, despite not getting the start, McCormick worked his way into seventh and a likely fifth or sixth overall until a big crash set him back. But, he then recovered to 12th and still secure a fine eighth overall ( one point off sixth) on what was a terrific performance from McCormick, who is starting to really believe in his own talent.

We caught up with the always smiling Glenn after the race to see what it was like to run with the GP men and have your home fans cheering you around the circuit.

A good qualifying then a cracking start that first moto running second, I saw you scrubbing over the Mobil tabletop on the first lap, the adrenalin must have been pumping in front of the home crowd!

Qualifying was a bit up and down, something happened and I only had half throttle, then it actually stuck on out the back and I couldn’t get it released – so it was a bit weird! So to get ninth, I was pretty surprised but I was expecting more come the race.

I just did what I knew I could do and got a start which is 80% of your race. I got away in third and made a pass real quick into second and yeah, just as you say, went over the Mobil and just…. the feeling of that was just unbelievable!

Even for a couple of laps I could still see Bas a in front of me a little, he wasn’t smoking me, and I started thinking last week he finish in top seven overall in the GPs! I just tried to keep going, Alvin went past me, he was going forward, and I think then Martin went by me, Obviously with practicing with him, I just tried to follow him and saw some things he was doing. He can be quite creative with his lines, so I tagged onto him and that kept me going pretty well.

I had been struggling this year mid-way, I felt like I would hit a brick wall so it was nice to be able to ride that pace the whole moto.

When Gilbert got you you were able to keep the pace with him..

Josh went past me and I tried to just keep going, when you start to slow off a little bit, that’s it, everything just goes. So I just tried to keep going and I didn’t realise Dylan was behind me, he passed me with two corners to go, I just heard him on the inside and was like, ‘ah shit, someone is there!’

I tried to hard to keep him behind me and near lost the front and he got the the drive up the hill to get by me. To finish sixth was pretty good, everyone on front of me was ex GP or doing GPs at the moment, so I was pretty pumped on that. But obviously as a racer you don’t race to come second, third or fourth, you always want to be the best.

Knowing how I’d ridden in the first one I thought I could have done better. I got my head down for the second one but the start wasn’t as good, it was as if I was trying hard to make it happen and not let it come to me as such. I was riding more tense and made a few mistakes then actually took quite a big one over the canyon and went over the handlebars and they got me right in the chest.

So that took the wind out of my sails a little bit and from there on it was just getting forward as far as I could. I knew after the first result I would have a chance of the expert podium so I just kept the head down and kept at it and ended up 12th, which after the first moto you feel a bit of a hero to zero! But really it was still good after the last couple of years having bad luck and not getting two good results in. So to have good ride, and the first one was really good, I think I had the third best lap time, so that’s a big positive moving forward.

A lot tracks are coming up that are going to be in my favour, the last two rounds are hard pack, which will be right up my street, so I’m looking forward to that.

That second moto you had worked your way into seventh and looking on for sixth overall, you looked comfortable.

That’s the best thing about it, I felt comfortable at that pace. It’s just the top five or six and being comfortable riding their pace for the whole moto, because of the intensity they’ve got. Like when I was following Bas in the first moto, after two laps, going over the arena jump I told myself to breath – I don’t think I had taken a breath for two laps!

It’s just trying to follow him and learn more, it’s definitely a good step in the right direction.

Having Jake Sheridan just behind you in that first moto and Martin I think was fourth or fifth, did that help relax you being in that top five because you are around those riders at home?

Yes and no, you want to win but also want to be the best home guy as well! Obviously Martin is so experienced, when he gets to the halfway mark, that’s nearly when he excels, he’s so good but yeah you want to beat everyone else as well. To be close to Martin, yeah it’s a nice feeling.

How was it having everyone cheering you on? Especially in that first moto?

Those first few laps, you could just see everyone around the track, this is what you race for, that feeling…

Are you still able to concentrate with the crowd cheering you like that?

Usually I would let the moment nearly get to me but I just tried to really concentrate and keep going forward and focus on what’s in front of me and concentrate on what I’m doing.

But I did go over that Mobil and think, ‘this is what it’s all about!’ To roll around Desertmartin with Sandstorm playing in P2, P3, it’s something else, it’s a dream you have as kid growing up.

It was a tough winter for you all but you are still riding really well this year.

Yeah, it was a tough winter. The last couple have been tough with injuries and set-backs and I always said if I could get a good winter it would really stand by me. This winter I had no injuries but I had a lot of personal things going on, that’s nearly worse than injury, it’s been really tough.

This is the first that I have actually felt I can do it now and I belong where I’m at. Everything that has happened, it gives you more drive to be there and that never give up attitude.