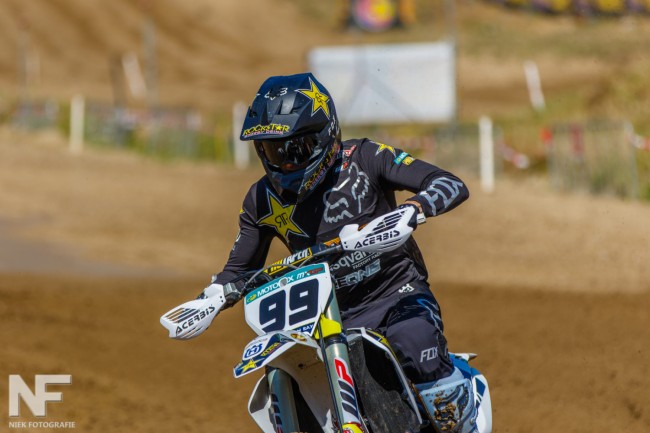 The end of the 2017 season was superb for Max Anstie and expectations were high for him heading into the 2018 season but things haven’t gone according to plan.

As we often see with some rookies, they tend to do better in their rookie year than the year after as they have more pressure on them to perform. However, Anstie crashed at Redsand at the start of the year, knocking himself out which clearly set him back.

We caught up with the likeable Brit to discuss his season and plans for the future.

Gatedrop: Max, we are here at the Zwarte Cross Festival. Overall it was a solid day in the office for you, can you talk me through your moto’s?

Max Anstie: It was alright. It’s always a bit of a different race here. It was my first time doing it last year so I kind of knew what to expect this year. It was so dusty for the qualifying race yesterday, you could barely see anything. Today, I mean it’s good but the track, because they ride the cars, vans and jeeps, the track is kind of different. It’s a bit sketchy, it’s narrow and the fencing is really close. Some bits are hard and then some bits are slick, it’s alright and the rest of the Dutch Championship tracks are good.

To be honest they should just do all of us on Sunday and not have all of those cars and everything riding round, they should do those the day before. It would feel more like a proper race then. It’s a good experience to be here and it’s good training, there’s good riders and we are all riding round together. We are pushing but we aren’t pushing the edge if you know what I mean. We are trying to keep a bit in reserve so if she does kick sideways on some bit of concrete then it’s okay. They are throwing everything at you around the track, beer, rice and everything at you! It’s part of the Dutch Championship and it’s cool to do for the fans.

Gatedrop: I mean I’m from Northern Ireland and never seen anything like it! It’s maybe the only event like it in the world, how would you describe and are you a fan of it?

Max Anstie: I mean it’s cool. I like having Malcolm Stewart over and some of the Americans. It’s cool, it’s just crazy because you don’t get the usual motocross fans. They’re not normal fans, they’re festival people so it just brings a different feel to it. It’s weird to go racing but it’s a cool experience to see. It’s just a shame we have to race at a high level here or if we had our own track it would be slightly different. We have to push quite hard and it’s like a festival so it’s weird. I’ve enjoyed it, it’s good to be here and to get out of here in one piece. I’m looking forward to this weekend now, we’ll go to work for Loket.

Gatedrop: Just on the GP’s, obviously last year you ended the season unbelievable, do you think coming into this season the expectations were very high, maybe higher than they should have been? The start of the season didn’t go great but I feel like you’re making good progress every week now.

Max Anstie: Yeah, exactly. I mean the end of last year was solid, wasn’t it? You know that’s right where we wanted to be but you know how it is. Things don’t always go to plan, even before the season I was riding really well at those Italian Championships. One thing led to another and then I crashed in Spain and knocked myself out. To be honest that really took the wind out of my sails for a couple of months, it was a strange experience. Then having to try and catch back up wasn’t ideal. I feel like we are getting there now, we are getting back to where I should be but there’s a lot going on. It’s not as easy and saying, yeah let’s go and ride like you did last year because there’s a lot going into the puzzle. We can get back there but it’s just a shame it’s gone the way it has.

Gatedrop: There’s a lot of silly season talk at this stage in the season, the word is you won’t be with Ice One Husqvarna next year. Is that something you can talk about? Also, if that is the case there’s possibly only one factory ride in the paddock with Yamaha, is that something that worries you?

Max Anstie: It’s a shame. You know, I’ve really enjoyed my time here with Husqvarna. Antti Pyrhönen told me in France actually that I need to look for another team. I’ve no hard feelings about it and nothing like that, I understand it’s business. It’s different things with budgets and whatever. There’s a whole lot of things, not just that we get along great, there’s a lot of things behind it. I’m lucky I’ve got Jamie Dobb my manager, he’s on the case with everything at the moment. I just have to go out and go and focus on doing what I do. We will see where it leads, we will see. I’m excited, okay, it’s unknown at the moment but I’m open to whatever comes around. I just want an opportunity to go and perform at my best no matter what coloured bike it is. I’ll do the best job that I can and that’s it. I’ve enjoyed every moment with these guys and I’ve still got the rest of the year so the goal is to focus on that.

Gatedrop: There’s been talk on the Vital MX forum you could be heading back to America next year, is that news to you and is it something you’d consider?

Max Anstie: That’s news for me (laughs). I wouldn’t mind, I don’t know what options are out there (laughs). No, I honestly haven’t spoken to anyone in the States to do anything over there to be fair. I would like to go back in the future but I’ve a job to do in Europe and the World Championship first. I’ve put too much into this to just go. Like you said, from the results last year and things, I want to have a solid year battling for podiums and top five all the time. I don’t want to go over there and start fresh again.