E-Trax – the future of growing motocross to the masses? 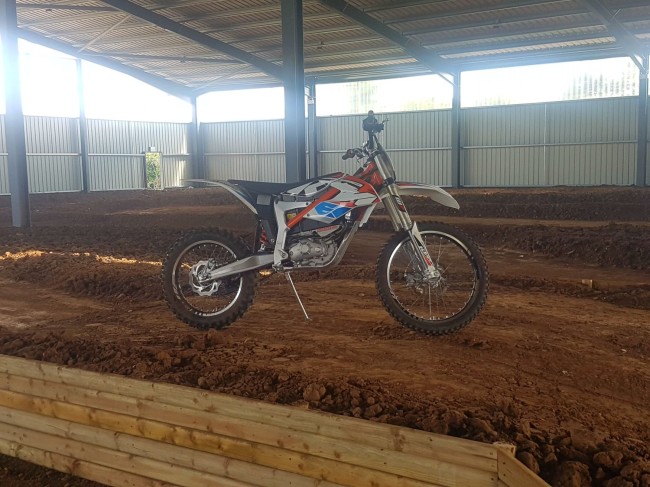 E-Trax NI have set up a brilliant initiative just outside Moira in Northern Ireland to attract more people to dirt bikes.

Similar to karting businesses that anyone can hire a track and karts for a couple of hours with their mates, E Trax offer adjustable, noise free electric KTM e-bikes and a safe indoor track to suit anyone’s riding ability in a safe environment.

We caught up with one of the men behind the idea, Kyle Rainey, who was putting the final touches to the place before opening in August in what should be a great, accessible spot to bring the public a new social activity as well as bring dirt bikes to a wider audience.

“We did it to try and encourage people to come to the sport who wouldn’t have the opportunity to try it otherwise,” explained Kyle.

“It will open the sport to all ages and all sections. It’s quite a male dominated dominated sport so it will encourage females here as well. It leaves it open to everybody who doesn’t want the expense of a bike.”

Kyle also points to the fact it will give kids a safe place to ride, “instead of children riding bikes around parks you can bring them here, and it is somewhere safe for them to ride on.”

The track itself has to cater for all so it is not a full blown motocross or supercross track, but it will be fun and safe for all.

“We are pretty pleased (with the track). We tried to keep it so people who ride bikes can come and ride in the winter but also have it so that that people who have never ridden bikes can come and enjoy it as well. It’s getting the balance so that every can enjoy it. There are a couple of wee jumps and banked corners to give people that bit of adrenaline of racing bikes.”

You can see Martin Barr’s lap around the track below:

A Lap @etrax.ni track is cool for all levels and abilities 👍